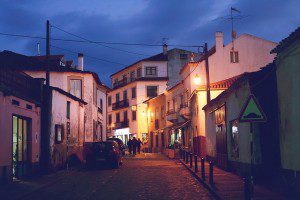 Lately, when I can’t sleep at night, I go for walks by myself.

I live in a crowded little steel-mill town, a conglomeration of houses rather than a community. When it was prosperous, working class families bought pre-cut houses from Sears and Roebuck and built them on tiny little lots. Now that it’s poor, the families have gone. Half the houses stand derelict, doors nailed shut or hanging open like rotten teeth, man-made caves for the stray cats to live in. They come out this time of night; they watch  you from the overgrown yards. If they like you, they lie on the sidewalk across your path and dare you to step over them; or else they follow you for a few paces, silent like a second shadow, until they find something more interesting.

I live in a striped neighborhood– a neighborhood that has “good” streets and “bad” streets, rich streets and poor streets, rather than being neatly divided into a rich and poor part of town. The very worst streets have broken street lights; people seal themselves inside at night and draw the blinds in case of stray bullets. People get evicted, their possessions all thrown out on the curb, and the garbage trucks won’t pick it up because it isn’t in bags, so it sits there, getting more and more rotten in the rain, making the sidewalk harder to travel, making the burrs and poison oak harder to avoid.

The moderately “bad” streets have taciturn men and women smoking on the porches of occupied houses, swatting the bugs that come to orbit the porch lights; and in between the occupied houses are the derelicts, with the cats.  I like those streets.

The best places to walk, though, are on the rich streets, way up toward the cliff. This town is so economically depressed that a middle-class person with reasonable credit can buy a mansion, a splendid old antique palace with a breathtaking view of downtown and the river, and live there like gentry, despising everyone else. I don’t like to walk there in the day time. Those are the people who’ve informed me that I shouldn’t live in this neighborhood at all. People who are poor, people who collect government benefits, bring down the value of the neighborhood. I used to try to get along with those people, because they’re all Catholic like me, but I don’t bother anymore. I wait until late at night, and take my walk down that street.

The houses there are breathtaking. These are no modern, kitschy McMansions; these are architectural wonders, great big Victorian mountains of brick or stone with wraparound porches, jutting gables and fancy landscaping, each on a depressingly small lot. They should be farther apart, with fountains and topiary gardens between them, but they huddle together on the relatively expensive land. Sometimes the lights are on as I walk by, and I can notice tasteful paint, elaborate wallpaper and expensive furniture inside.

I’ve named all of the mansions, in my mind. There’s the Yellow Brick House, three stories of honey-colored brick on a slightly larger lot than usual. There’s the Von Trapp House, which I’ve heard the neighbors call The Masoleum. There’s the Gatsby House, because of its Art Nouveau glass in the windows. There’s the Manor House with its deep sloping slate roof.

I like to make up stories about the houses, about who I would be if I lived there.

I like to imagine myself rail-thin with a chin-length bob and a drop-waist dress, living in the Gatsby House. I imagine myself in a crisp 1930s dress with a jaggedy perm, leaning on the stone veranda of the Von Trapp House. I try to imagine what it would be like to be myself, in modern times, only socially acceptable and liked. I try to imagine thinking that public assistance is unnecessary and creates dependence, that only drug addicts use it, that no one becomes a drug addict except deliberately and with wicked intent anyway. That no one is so poor they can’t keep up their appearance. That misfortune is a dark forest you willingly walk into, instead of a precipice you often slip over backwards. That if you do, there are plenty of private charities who will help you, and no one needs to “collect.”

In some ways, it’s easy to imagine. I used to think similarly, when I was a teenager. By some mystery, some people are allowed to remain youthfully naive their whole lives, and claim it’s a mark of maturity. I don’t understand this. It’s a lack of empathy on my part not to understand. I hope to understand someday. I try to imagine myself in their place, but it’s puzzling. Easier to imagine I’m a rail-thin flapper or a wartime housewife, or a noble gentlewoman who manages the peasants at the Manor House.

By the time my thoughts turn sour like this, I’m usually at the end of the rich street. I turn down one of the moderately “bad” streets toward my house, with the poor people smoking on their porches and the man-made caves bursting with stray cats. I can see the lights on inside as I walk by. Some of the windows have bed sheets tacked to the frame instead of curtains, just like at my house. But sometimes I notice living rooms with cheap wood paneling, televisions blaring with no one watching, people milling around crowded little kitchens.

And then I’m home. 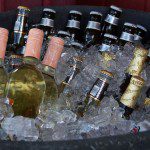 September 28, 2016
Throwing the Baby Out With The Beer: The Pro-Life Movement and the Idolatry of Party Politics
Next Post

September 29, 2016 Michaelmas Recollections
Recent Comments
0 | Leave a Comment
Browse Our Archives
get the latest from
Steel Magnificat
Sign up for our newsletter
POPULAR AT PATHEOS Catholic
1