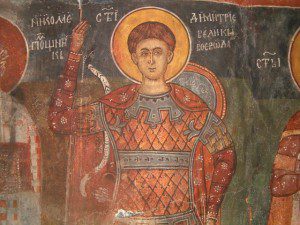 (Image: a fresco of Saint Demetrius, via Wikimedia Commons.)

I took a free Orthodox calendar from the back of the OCA Orthodox Church the other day. I’ve been flipping through it to look at the pretty icon pictures since.

I checked my new Byzantine Catholic calendar, and he’s on there too, but he’s just called Holy Martyr Demetrius. My calendar is smaller, so maybe they just couldn’t fit “Myrrh-Gusher” on there.

How did Saint Demetrius get the title of Myrrh-Gusher? Oh, just how you might think. Demetrius was in prison in Thessalonica for being a Christian, you see. While in prison, he gave his blessing to a young boy named Nestor. Nestor took that blessing and went to the local arena, where the governor had challenged any champion to wrestle a giant overgrown German Barbarian on a platform overtop of a bed of spears.  Nestor wrestled said German, threw him off the platform and impaled him on the spears. Somehow, the governor figured out that Nestor’s victory was due to Demetrius’s blessing, so he had his own soldiers impale Demetrius on their spears in turn. Demetrius’s servant Lupus secreted away his master’s blood-caked cloak and ring, which he used to perform miracles of healing until the governor had Lupus killed as well. But even that couldn’t stop the miracles. A stream of fragrant myrrh is said to flow from Demetrius’s body (or just from his tomb, depending on what source you read), and those who are anointed with this myrrh are healed from their illnesses.

I always wonder about stories like these. Not the details like giant overgrown German Barbarians wrestling over a bed of spikes; life’s like that sometimes. I wonder about the reactions to death. Imagine seeing your best friend gorily murdered, and your first thought is to run up and take his stained sticky clothing for relics. Imagine seeing a strong-smelling fluid flowing from a corpse or a tomb, and touching it. Who would do such a thing? Who would think to do it? Who was the first person who decided to try smearing said fluid on a sick person? Who was the first sick person to agree to it? How did it catch on?

This is one of the things I love about the Churches of the East and West and about the place I’ve found here in the Byzantine Catholic Church. It’s so tactile, so fleshy and real. It’s all about blood and water, sweat and tears. It’s about bodies and things that go into bodies, and things that gush out of bodies. This season of the year, we don’t eat meat. This day of the year, we eat cheese. This day, we eat caviar. This day we eat the Flesh of Christ. This day we look upon the One we have pierced. Blood and gore and the outward manifestations of suffering, become the means of our salvation from this world of suffering. We bathe in blood and become clean. We die, and we obtain eternal life. We celebrate a stream of myrrh gushing from the body of a martyr. We rub strong-smelling fluid from a corpse on ourselves, and find healing. It can’t be otherwise. This terrible, intimate, slimy way is the way of the Cross, the way of the Christian. Anything else is heresy.

I think it’s a terrible error, to shun the messy outward manifestations of suffering. I think it’s missing the whole point. 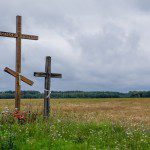 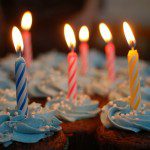