I Can No Longer Bear The Berenstains 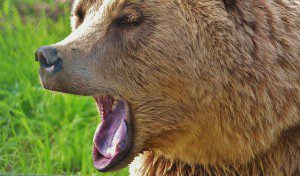 Somewhere along the line, I bought into the escapist fantasy that a large number of small containers would keep my daughter’s play room organized.

I blame the Berenstain Bears for this.

The Berenstain Bears were a mainstay of my childhood; my father always stopped at the library on the way home from work, and he would usually bring home a VHS tape and a stack of children’s books. There was nearly always a bright volume of the interminable Berenstain Bears series in the stack. My father would read them to us at bedtime, voicing Papa bear in a slow Southern drawl as the good Lord intended. I would be horrified, many years later, to watch the PBS cartoon adaptation and find out they’d given Papa a smooth basso voice with some kind of Canadian accent. It was an even worse offense than dressing the cartoon version of Mamma in a plain gown with no polka-dots.

As a child, I loved the Berenstain Bears. I liked how the books’ titles were always printed in diverse fonts to illustrate the theme of that particular book– shaky, threatening-looking letters in the book about strangers and obese, puffy letters in the book about junk food. I liked how the back cover was always a patchwork of miniature front covers from other Berenstain Bear books. I was mesmerized by the tree house’s decor, all knots and shredded bark, and they way the Bear family used an antique telephone like the one in Mary Poppins.  It fascinated me that Mamma Bear always had time to bake sweets, yet never put on shoes or changed out of her polka-dot nightgown. I cherished those books.

Now that I myself am a mother, my opinion has changed somewhat.

I hate them, because the lessons they teach are always wrong, yet I learned them at such and impressionable age that I can never get them out of my head. I know from personal experience that organizing my daughter’s mountain of toys into a hundred neat tidy little boxes with a label on each will not turn her bedroom into a clean, organized space; it will only add a hundred boxes to the pile of detritus. Yet, in the very definition of madness, I keep buying boxes and expecting a different result.

And this is only one example of the bad lessons I learned from the Berenstain Bears. I still have the notion that if I put all of my candy away in the freezer and subsist on carrots, nuts, raisins and apple rings, I will lose weight and be able to run a marathon just like the Bear Family. This even though I know marathon runners personally, and they eat French fries dipped in mayonnaise– not to mention that I’ve never lost weight on the nuts-and-raisins diet, only gotten a painful case of the runs.

I still feel that if I mutely refuse to say hello to strangers in the park, I can avoid being kidnapped.

I expect that fasting from television for a week will cure television cravings and make you want to play outside, even though it inevitably leads to binge-watching television once the week is up.

I believe that the doctor will shine a flashlight up my nose to diagnose the common head cold, and prescribe a viscous pink liquid to cure it.

When encountering a gang of bullies of any kind, I constantly feel the urge to stand on the opposite side of a country road and bray “Baaaah, baaaah, bunch of sheep!” at them. And since most of the bullies I encounter in my current state in life are of the snooty-professor’s-wife persuasion, not prank-playing urchins, that taunt doesn’t get me very far.

Worse even than my thwarted expectations, though, is the way my opinion has changed about the character of Mama Bear.  As a child, I accepted her eccentricities; now they seem more sinister. It’s no longer cute to me that Mama Bear never takes off her grubby nightgown. She changes out of her nightcap when going to town, but she wears the nightgown at all times.  And that’s not to mention her pathological habit of baking tray after tray of toothsome cookies and then blaming the children for their obesity, or permitting the television to be on for hours and then blaming the children for their TV habit.

It’s downright creepy how the whole household abides by Mama Bear’s wishes. She orders them to fast from television for a week, and everyone including Papa Bear is forced to comply. She writes up a chore chart and expects her husband to abide by it– and he does. He always does. She decides on a whim to open up a quilt shop one day, obtaining the money for the investment from Lord knows where, and Papa Bear mutely takes over childcare. No family decisions are made with his input; he’s treated as a chattel. I wonder what would happen if he said no, just once.

It’s funny how growing up changes your perspective on things. 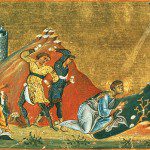 Trump's Attendance At the March For Life Is...
With Trump as their figurehead, the pro-life movement now looks, to anyone...
view all Catholic blogs
What Are Your Thoughts?leave a comment
Copyright 2008-2017, Patheos. All rights reserved.