I don’t know anything about Milo Yiannopoulos.

I’ve heard he’s a bully and he looks like a lounge lizard, but that’s all I know. My fellow Patheos bloggers can fill you in.

So, if you were waiting with baited breath for my opinion on Milo, sorry, I don’t have one.

I do have an opinion on something else, though.

Yesterday, all of my friends were in uproar about a public conversation, about Milo Yiannopoulos, between Doctor Janet E. Smith and her friends on Facebook.

Janet E. Smith has a doctorate in classical languages, but lectures in  moral theology at a seminary. She recently gave a talk at Franciscan University. Her website is called “Janet E. Smith’s Sexual Common sense” and advertises her books and recorded lectures; these have comfortingly commonsense names like “Contraception: Why Not?” “Theology of the Old Body” and “Why Premarital Sex is Stupid.” As a writer myself, I tend to use titles which are too flowery and uninformative, so I admire her ability to cut to the chase. No one would wonder what kind of content they’d find in a lecture CD entitled “Why Premarital Sex is Stupid.” I hope the rest of her lecture was equally straightforward. Frankness, when educating about sex, is always better than the alternative.

But here’s the thing: frankness itself is not enough. You’ve actually got to know about sex to lecture about sex. You’d better know all about sex and sexual ethics, to lecture about moral theology at a Catholic seminary.  And Doctor Smith apparently does not.

The aforementioned conversation had any number of zingers, but this is the line that made my hair stand on end: 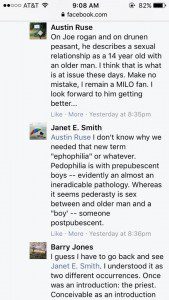 Yes, I see the usually strait-laced Austin Ruse calling himself a “MILO fan” there, but ignore him for the moment. Doctor Janet Smith, a moral theologian who writes about “commonsense sexuality,” publicly declared the following:

I don’t know why we need that new term “ephophilia” or whatever. Pedophilia is with prepubescent boys–evidentily an almost an ineradicable pathology. Whereas it seems pederasty is sex between an older man and a “boy”– someone postpubescent.

You know? I’m often embarrassed by my own ignorance. I make ignorant mistakes all the time. But at least I’m not a professor of moral theology who just publicly revealed she doesn’t know her field in the least.

For the record, DOCTOR Janet, it’s spelled “ephebophilia,” and it means a sexual preference for older teenagers, usually ages fifteen to nineteen and NOT the fourteen-year-old prepubescent boys you mentioned. Ephebophilia is a sub-set of the group of sexual preferences known as chronophilas. It’s not a new term. It dates back to the late nineteenth or early twentieth century. The name “ephebophilia” comes from the Greek terms ephebos meaning “one arrived at puberty” and philia meaning “love.” Someone with a PhD in classics ought to know that instantly. It has nothing to do with being homosexual; a grown man preferring fifteen-year-old-girls is also an ephebophile.

“Pedophilia” refers to a sexual preference for children– not sex “with prepubescent boys” but a desire to have sex with boys or girls. It has nothing to do with homosexuality. It is not even itself a sex act, just a grossly disordered sexual desire.

“Pederasty” nowadays refers to sex between a man and a boy–usually a boy between the ages of twelve and seventeen, often pubescent but sometimes not. It had a bit broader meaning historically, but based upon the conversation Doctor Smith was having she’s referring to the sex act.

These terms do not refer to the same thing. Pederasty is a sexual act; ephebophilia and pedophilia are grossly disordered sexual preferences. And this is immensely important for a so-called moral theologian to know, because a mere preference or desire, no matter how disordered, can never in itself be a sin. A person could theoretically feel sexually attracted to teenagers their whole life, but if they never once acted or tried to act upon their disordered attraction, they’d be chaste. A person who commits pederasty commits grave matter, a reprehensible act of sexual predation– not just unchastity but rape.

I wonder if such a person should be publicly defending the remarks of Milo Yiannopoulos in the first place, but as I’ve admitted I don’t know enough to comment on that.

Yesterday, Doctor Smith responded to the backlash against her conversation by pleading that she was educated by “a veritable Socrates.” But whoever this veritable Socrates was, he apparently never had her read any Socratic dialogues or she’d certainly know what pederasty was.

Do you know why people don’t take Catholic sexual ethics seriously? Well, having a popular scholar in the area speaking this sloppily can’t be helping very much.

She’s good at writing titles for her lectures, though; gotta give credit where credit is due. 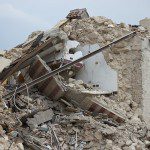 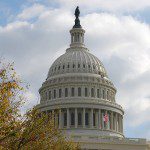 February 24, 2017 A Car Fire of a Form Letter and the False Gospel of Elimination
Recent Comments
0 | Leave a Comment
"Yeah, there’s a big difference between assessing that you rolled a 1 and got a ..."
Peter A Survey, A Synod and a ..."
"We'd like the GED and a driver's license. The license will take a bit of ..."
Mary Take it Day by Day
"I took the survey, and I left the email address I use for random online ..."
Bemused A Survey, A Synod and a ..."
"If you can, try to get her to do her GED before the baby comes. ..."
Bemused Take it Day by Day
Browse Our Archives
Related posts from Steel Magnificat