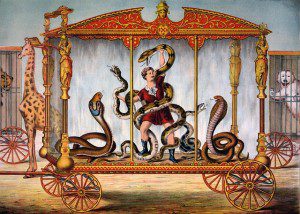 I think of myself as a tolerant and respectful person with an open mind.

The world is a strange place, full of a myriad of things I can’t understand. Better to live and let live, I usually say.

But I simply cannot empathize with anyone’s desire to keep a cobra as a pet.

I bring this up because my friend Brooke just showed me a news story from her neck of the woods– someone from Ocala, Florida notified the Florida Fish and Wildlife Conservation Commission that their pet Suphan Cobra had escaped its enclosure and was on the loose. The article doesn’t say what the Suphan Cobra’s name is; I hope it’s “Stephan.” Stephan’s owner, whose name is not given so I’ll call him Hubert, was licensed to own cobras last May. The article mentions, in addition to Stephan, Hubert also owns a Gaboon viper (whom I’ll call Gabby) and an African bush viper (Toto).

Officials are scrambling to hunt down Stephan before he bites someone. “If someone were to be bitten by the escaped cobra,” states Jeff Corwin, “They would need to get to the hospital as fast as they could and be treated with the appropriate anti-venom.”

I think that tells you everything you need to know about Florida, actually. Their emergency rooms have cobra anti-venom in stock.

This is why I live where the air hurts my face. That and the fact that hot weather makes me sick.  The Ohio Valley is a place where an escaped cobra would freeze into a venomous garden hose half the year. We’d find his body in the Spring, and make a leather hat band out of him. Then again, in the Ohio Valley people wouldn’t bother to get a license for their cobras. They’d just keep them on a tether in the front yard with the guard dogs and the pickup truck and never clean up any cobra poop. Heaven help us if one of the Steubenville students found an escaped cobra; they’d probably pick it up to prove they had Charismatic gifts, and then the university would have to put a paragraph in the student handbook forbidding snake handling.

But I digress. Why would anyone have a cobra for a pet? I asked my husband about this, and he just started singing “Cobra Commander” to the tune of “Copacabana.”

I asked my friend Rebecca. Rebecca is a literature professor and she used to live in the South; she’s likely to understand these types of eccentricities better than I.

“I sort of want one,” she said, “if it’s a magickal cobra that talks and will coil on my head like Cleopatra’s crown, and not bite me.”

She has a point. Then again, a magickal talking guinea pig would coil on your head like a Cossack’s winter hat and not bite you, if you fed it enough cabbage.

I used to have a guinea pig named Matilda– Tildy, for short. She was plump as a groundhog and picky; she only ate the orange biscuits in her orange and yellow guinea pig food. She liked salad and apple slices best of all.  She was absolutely terrified once when I gave her a paper bag to play with– she crawled in, but was too plump to back out, and she was scared of the dark. Afterwards she ate the paper bag.

Tildy served many useful purposes around the home. She could sit on your lap or feet like a hot water bottle. She could hide in her pigloo when guests tried to admire her.  She could throw herself against the cage bars and wheek until you brought her an apple slice. She could protest being given carrot sticks, which she didn’t like, by rolling them down the ramp off the plastic platform in her cage. She could wheek along with the credit sequence to Doctor Who. I would say “Go to your ROOM” in an imitation of the Ninth Doctor, and Tildy would obediently scramble up her ramp to the platform for a treat.

I’d like to see Stephan the cobra do any of that.

Tildy bit me several times, usually when my fingers smelled like apples or when I tried to bathe her. Those bites never once resulted in a trip to the emergency room for antivenom.  Usually they didn’t even bleed.

I can’t see any reason to own a pet other than a guinea pig, unless you plan to ride your pet into battle. But you can’t do that with a cobra either.

I’m really at a loss. I can’t think of one good reason for why Hubert was keeping Stephan as a pet– unless he’s actually the Norse god Loki, and Stephan is actually his son. Perhaps Stephan hasn’t been found because he’s surrounding the earth and biting his own tail. Someone should check if Hubert also has a large dog, a morose daughter, and an eight-legged horse.

Is that likely? No. But, as I mentioned a moment ago, the world is a strange place.

And Florida seems about the strangest place in it.

March 14, 2017
In Case You Missed That Executive Order Yesterday
Next Post

I love it when Catholics Nerd...
Catholic and Enjoying It!
Related posts from Steel Magnificat