The Eleventh Station: Jesus is Nailed to the Cross 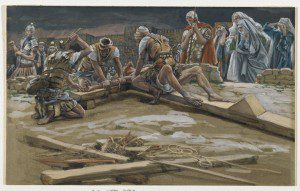 We Adore You, O Christ, and we bless You, because by Your holy cross you have redeemed the world.

When they came to the place called The Skull, they crucified Him there, along with the criminals, one on His right and the other on His left. Then Jesus said, “Father, forgive them, for they do not know what they are doing.”

The pain is beyond all telling.

This is the worst punishment the Romans had ever devised, and they’d thought of many grisly punishments. This is worst than anything the people of Israel ever thought to do to anyone. Their law has stipulations about when an executed corpse could be hung on a tree, but it was the Romans who thought of nailing a live man to a tree, and leaving him there in shame and torment until his own exhaustion suffocated him.

Rome and Israel, the Pagans and the Jews, the unclean and the clean, the modern and the ancient– they conspired together to do the worst thing they could imagine, to an innocent Man. They knew He was innocent. Everyone knew. The Jews could find no consistent testimony against Him. Pilate found no fault in Him. But Israel asked for His execution, and Rome obliged. His own disciple betrayed Him; the rest of His followers deserted Him; one denied even knowing Him three times before dawn.

Except for the Mother of God, there is not a soul in the entire world who is innocent of His death.

This is, after all, what human beings do to God. We see Him, and we can’t understand Him, so we try to make Him fit. We try to make Him conform. When He doesn’t conform, we get angry. We force Him down onto things we can understand, material things, man-made things like wooden planks. We force His feet one on top of the other so He can’t walk any closer. We stretch out His arms so He can’t wrap them around us. We find that His wrists don’t quite reach as far as we’d like, so we pull on them until they’re dislocated. We fear that He might get up, so we take other material things– things we’ve smelted and molded and sharpened to a nice utilitarian point– and we drive them through His flesh and bone until we’ve satisfied ourselves that He cannot move.

Here is our handiwork. The all-powerful Creator, naked, scourged, bones exposed, gushing blood, pinned to man-made things by man-made things, helpless. Nice and neat. We’re free to look upon Him now, and feel satisfied with ourselves. God looks like something we can understand.

And what does God do? God, who cannot but act justly? The One who can neither deceive nor be deceived, but always does right? What does He do?

” Father, forgive them, for they do not know what they are doing .”

They don’t know what they’re doing.

They ought to know.

But they’re so accustomed to crucifying God between man-made things, they can’t see what they’re doing anymore.

And we do the same.

We ought to have known what we were doing, but we did not. Forgive us. 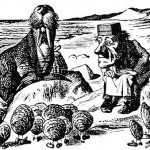 April 4, 2017
A Noise Annoys An Oyster: A Critical Review of Rod Dreher's Review of Sam Rocha's Review of The Benedict Option
Next Post 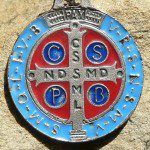