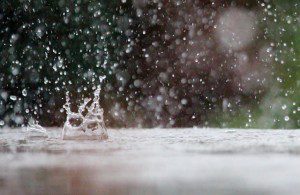 One of Molly’s guests down at The Friendship Room somehow made it into a rehab and counseling program, thanks be to God. That’s not the way it usually ends around here. They usually die. No one mourns for them but the beautiful, broken people at the Friendship Room, those who care for them, and those of us who pray and try to tell their story.

She has nothing– no clothes, no toiletries, not a single worldly possession. She was desperate for tampons. I had a box  I didn’t need this week. According to my holy father Saint Basil, that means they belong to her.

I got on the bus to bring her her property.

When I got off, the general steaminess of a Steubenville afternoon had turned to an eerie downpour. There was blue sky over the cliffs of West Virginia, on the other side of the the Ohio River; there was blue sky over the cliffs that separate downtown from LaBelle. There was a black cloud directly overhead, and it was raining. Afternoon sun caught the drops in a cascade of light, a shower of diamonds. Walking from the depot to the Friendship Room felt  like running through a sprinkler five blocks long– bliss.

I dropped off the tampons. I went to the Adoration chapel next door, and of course I stayed too long.

When I finished praying, the Angelus was ringing.  I’d missed the last bus.

I didn’t have a phone to call a friend for help, even if I could have thought of anyone to call. I would have to walk back, two miles, through the seediest parts of downtown, then hike any one of the seedy forest paths up to the rich part of LaBelle, past the mansions to the poorer rentals and to my own house.

The rain had cooled the pavement; it was nice weather for walking. It wouldn’t be dangerous to walk alone until after dark, and I could make it before dark if I took short cuts. I set out, shooting diagonally across downtown, through alleys and parking lots that were once paved flat but are now black gravel. Past the plaster statue of Saint Joseph at that towering, traditionalist Latin Catholic church that used to be home. Help us, Joseph the Betrothed.  Past the building that used to be the school, with that upside-down cross on the facade. It looks like a demonic symbol, but of course it’s not. It’s meant to represent Saint Peter. Help us, Holy Apostle.  Past the Urban Mission were the soup kitchen is, in the basement of an ancient Methodist church. Past the big stained glass window of the Transfiguration, backwards, darkened and in all the wrong colors from the outside. I couldn’t even tell which figure was Moses and which was Elijah, at first; then I remembered Moses was the one with the staff, and Elijah had somebody kneeling at his feet. One of the apostles, I assume, but I couldn’t tell who through the backward glass.

Or it might as well have been. I’m always kneeling at his feet. Help us, Father Elijah.  Let they compassion go quickly before us, O Lord, for we have become exceedingly poor.

Up close, I can see the windows– some broken, some boarded, some with curtains. Some have a sun catcher or a prism hung to color the light. People live in those houses– people with stories like mine. People as ashamed of the state of their houses as I am of mine. People who dread the rain, or perhaps they run gleefully through it like a sprinkler the way I do.

Perhaps people are all the same. 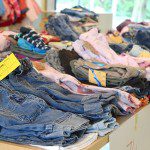