A “Catholic Evangelizer” Is Sending My Friend Death Threats (Updated) 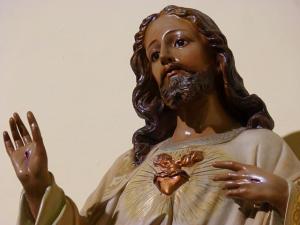 I am pretty upset about something right now.

My friend Daniella is a wonderful woman. She’s a courageous survivor of domestic violence, a fellow Catholic, a mom of seven, a nurse, a very compassionate woman, invariably there with a snarky remark to cheer me up when things go wrong.

Daniella is African-American. She is mixed-race and some people presume she’s white, but she’s not. I’ve occasionally seen white Catholics talk over her, as if her experience of actually being a Catholic who isn’t white is irrelevant to the discussion, and that was bad enough. I don’t think they meant to be racist, even though it’s a very racist thing to not take African-American people seriously when they talk about their own experiences.

Today, however, she got rape threats and death threats.

She got them online from a fellow Catholic. I know he’s a Catholic because he styles himself as a “Catholic Faith Defender Knight” and who has a profile photo of the Sacred Heart of Jesus. He’s got a Rosary and a Vatican flag in his cover photo, and “Catholicae fidei Christianae plenitudo” posted as his intro. He’s very public about his faith and has even posted his conversion testimony online. His Linked In says he’s a “Catholic Evangelizer” and he claims he works at the Byzantine Catholic Seminary of Saints Cyril and Methodius but doesn’t say in what capacity.

His name is Kaleb Patrick Lippert. 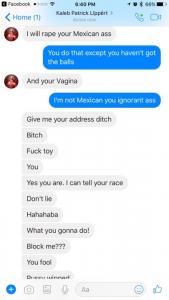 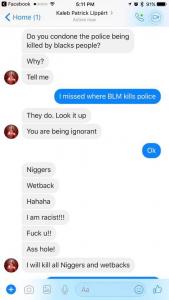 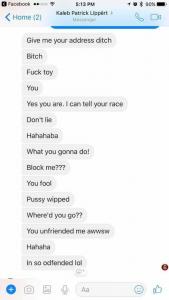 I looked at his page, after Danielle showed this to me. He publicly calls black people the N-word and proclaims that he wants “liberals” exterminated. 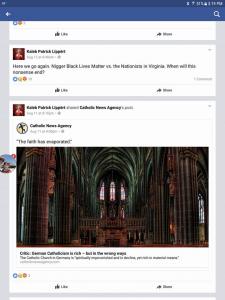 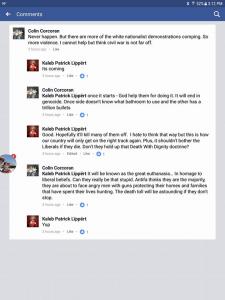 There’s no good part to this, but to me, the worst part is the photo. It looks as though Jesus is cursing out Danielle with sickening racist names. So many people have blasphemed the name of Christ by claiming His blessing on their racist deeds; now, with social media, we can appropriate His image for our sins in a new way.

I wish I could reach into my screen and tear that image away. No, Kaleb Patrick Lippert. You blaspheme Christ for claiming to defend His church while spewing hate like this. You do not speak for the Sacred Heart of Jesus. You do not speak for the church who was home to Saint Josephine Bakhita, Saint Martin DePorres, Saint Moses the Ethiopian. God’s name is blasphemed among the gentiles because of you, and the other white supremacist evildoers that pose as devout, “traditional” Catholics.

I’m not really surprised. It’s not like his kind is rare, in any denomination of Christianity, much to our shame.

But I am very angry.

All I can do is denounce him. We all ought to denounce them. Catholics faithful to the Church’s teaching on racism ought to denounce racism as publicly as we can, because racism is contagious and it’s becoming more and more acceptable in our society. Racism is a sin; it’s a sin that dehumanizes God’s children and divides us all when Christ would have us be brothers and sisters. Hate is a sin. Threatening murder is a sin. Doing it all while styling yourself as some kind of exemplar of Catholic tradition is the sin of scandal. It’s not something we can afford to be silent about, if we take our faith seriously.

May the Sacred Heart of Jesus have mercy on us.

8/16/2017 updates:
Thank you to all of my readers who offered their prayers and empathy to Daniella and me. I want to tell everyone that Mr. Lippert had at least two facebook accounts, both of which have been deactivated, and the police and FBI have been notified. This is not the first time he’s threatened violence or harassed online, according to several people who have contacted me about him. But we’re reasonably certain that Daniella is safe from any harm at this time.
Also, the Byzantine Catholic Seminary of Saints Cyril and Methodius have confirmed that Lippert lied on his Linked In about having anything to do with the seminary. Here is their statement:

In light of recent developments on social media, the Byzantine Catholic Seminary of Ss. Cyril and Methodius, Pittsburgh, PA has issued the following statement:

As an educational institution and as an employer, the Byzantine Catholic Seminary upholds the revealed truth of the equal dignity of all human persons as bearers of the divine image. The educational mission of the Seminary is bound to the official teaching of the Catholic Church and to the received patrimony of Byzantine Tradition. The Byzantine Catholic Seminary welcomes all qualified applicants who wish to be educated in this particular faith tradition. In its admissions and employment policies, the Seminary eschews discrimination or harassment on the basis of race, religion, national origin, gender, age, marital status, sexual orientation, disability or veteran status.

Finally, I would like to caution my readers that certain friends of Mr. Lippert are claiming that he is an innocent and “sweet” man who only attacked Daniella due to his Asperger’s syndrome. I have many good friends on the autism spectrum and I want to make very clear that Asperger’s does not in any way cause people to open multiple facebook accounts, lie about their affiliation with seminaries, pretend to be evangelists or make graphic threats of rape and murder. I understand Lippert’s friends want to protect him, but slandering the autistic community is not an appropriate way to do this.

8/24/2017 update: Kaleb is back on Facebook, he has at least two accounts as before, and he is claiming that his phone was stolen, the thief attacked Daniella, and that he rejects all racism. However, the supposed phone thief copied his exact writing pattern, grammar and spelling errors and is certainly not the one who lied about his affiliation with the seminary on his Linked In. Also, Kaleb instantly attacked me and called me a “narcissistic witch” and “not a Catholic” when I mocked his cock-a-mamie story. Furthermore, as of this evening he still has posts with the n-word on his public Facebook page. His story has no credibility and I stand by everything I have written. 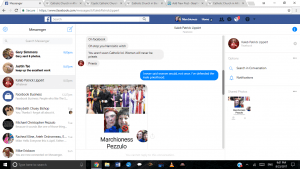 August 14, 2017
A Reader Asks: Is There Such A Thing As African-American Culture?
Next Post 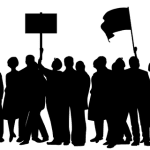 August 14, 2017 A Statement From Christian Ethicists Without Borders On White Supremacy and Racism
Recent Comments
0 | Leave a Comment
Browse Our Archives
get the latest updates from
Steel Magnificat
and the Patheos
Catholic
Channel
POPULAR AT PATHEOS Catholic
1