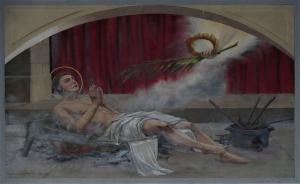 I trust that none of you are surprised to hear that today the odious Steve Bannon, who claims to be a Catholic, declared himself at odds with the Church’s teaching on immigration.

“As much as I respect Dolan and the bishops on doctrine, this is not doctrine,” He told 60 Minutes, in an interview which will air Sunday.  “This is not doctrine at all. I totally respect the pope and I totally respect the Catholic bishops and cardinals on doctrine. This is not about doctrine. This is about the sovereignty of a nation. And in that regard, they’re just another guy with an opinion.”

He was referring to the United States Conference of Catholic Bishops’ denunciation of Donald Trump’s scrapping of the DACA protections for children brought into the country illegally, and he is wrong. The Church does have doctrine on immigration; she declares that the wealthier nations have the duty to welcome and accommodate foreigners in search of safety and livelihood they cannot find in their country of origin. This doesn’t mean a nation is required to have no immigration laws at all, but it does mean that denying immigrants entry or deporting them once they get here is a matter regarding which the Church has doctrines, and it’s the bishops’ job to interpret and apply those doctrines. If the USCCB has come out in condemnation of DACA, they’re not doing so for kicks and giggles. They’re doing so as a matter of doctrine.

Bannon had other thoughts, as well. He thought he knew the motives of these bishops with their pesky preaching on immigration:

Well, of course the bishops have an economic interest. That’s also doctrine.

The Church is very jealous and greedy for her treasures. She’s a terrible hoarder of treasures. What she defines as treasure is something that might make Bannon balk, of course.

Have you heard the story of Saint Lawrence? Yes, the martyr who got roasted to death on a grill and said “Turn me over!” halfway through, thus securing for himself as the patron of both cooks and comedians. Most people know that part. But have you ever heard what Saint Lawrence did before he was put on the grill?

“This is the Church’s treasure!” said Saint Lawrence.

The Prefect of Rome did not laugh. He was a strict, no-nonsense, law-and-order sort of man, the kind of person President Trump would pardon during a hurricane to garner ratings. The prefect had Saint Lawrence grilled to death. The good saint expired while cracking jokes, as you’ve heard– may we all have the grace to imitate his courage. He was martyred for declaring that physically, economically and socially disadvantaged people are the Church’s treasure.

And this is doctrine: the poor, the sick, the persecuted, the helpless, the people who can’t take care of themselves but need protection and aid– these are the treasures of the Church. We’re required to care for helpless people in danger. Immigrants certainly usually qualify as in danger. “Dreamers” who were brought here against their will in the first place and now suddenly have no country to call home, are in danger. They are treasures. The Church’s greatest economic interest would be to care for those treasures regardless of Caesar’s whims.

Steve Bannon and Saint Lawrence do agree on one thing: the USCCB’s motive in speaking on behalf of immigrants is strictly economic. It’s just not an economy that Bannon can understand.