The Substance of My Thoughts and Prayers: A Response to the Las Vegas Shooting

The Substance of My Thoughts and Prayers: A Response to the Las Vegas Shooting October 2, 2017 Mary Pezzulo

I woke up to find the news about the mass shooting, and I’m at a loss.

What do you say about something this horrendous?

Well, I can’t stop thinking about it, and I’ll certainly pray. But what’s the point of saying that?  We’re always saying it. I remember, after the Virginia Tech shooting ten years ago, during my first year at Franciscan University, someone had left an enormous piece of paper in the student center for everyone to write out their condolences to the survivors. And every single person had written some variation on “Thoughts and prayers!” Priests had written it. Students and employees had written it. They hadn’t written prayers on the paper, or divulged the contents of their thoughts; they’d only stated their intention to think and pray in some manner, hundreds of times, across the sheet of paper.

Maybe it would be more genuine, if we’d actually voice our thoughts and prayers.

Here are my thoughts, first of all.

I think that I am stunned but not surprised. I am horrified, grief-stricken, weary, afraid, but not at all shocked. I am devastated at the thought of all the families and friends around the country reeling from grief and trauma, but I’m not astonished.  This is America, where mass shootings are the norm. We’re almost used to them. Another one comes just as the trauma fades off from the last. They are something that, the powers that be in this country are willing to accept as inevitable forces of nature, like earthquakes.

I think that ISIS would gladly take responsibility for anything, and we certainly need to ignore their claims.

I think that people are going to tell me not to politicize this, which is idiotic because it’s already political. Conflicts between people who live in the same country are inherently political. Everything that people do to one another is political. Tragedies that might be stopped or mitigated if politicians made and enforced certain laws are certainly political.

I think that if the shooter hadn’t had more than ten rifles in his possession, the death toll would be much lower. I think that there’s really no denying America has a serious gun problem. I think that the constitution is a man-made document, not a Divinely inspired law, and it ought to be amended if it’s an excuse for things like this to happen. I don’t think there’s any way a “good guy with a gun” could have stopped this, and what’s more I imagine that the shooter somehow envisioned himself as a good guy with a gun. Most everyone who commits murder finds a way to believe he is justified and even righteous. That’s how crimes of this enormity work. Someone fancied himself a good guy with a gun– so good, in fact, that it was his business to use the gun on as many people as he could find to prove his point.

I think that, since the perpetrator of this act of terror is white, people are going to refuse to call him a terrorist.

I think that the gun-rights crowd is going to bring up mental illness, as if any generic mental illness caused mass shootings. I’ve spoken out against this numerous times, but people don’t listen. “Mental illness” is not an explanation for a mass shooting. Learning disabilities don’t make people commit mass shootings. Tourettes doesn’t make people commit mass shootings. Anxiety and depression don’t make people commit mass shootings.  A person struggling with hallucinations can sometimes become violent (although the vast majority are not) but by the time it gets that far, they’re usually too disorganized to plan anything as complex as this. People with certain personality disorders might have a total disregard for the safety of others or even enjoy watching them suffer, but those people are never the victims of prejudice when we all decide to blame mental illness for mass shootings. They’re not the people that gun-rights activists suddenly want to lock up in mental hospitals. They say  “mentally ill people” in general, and they mean the people who are already seeing therapists, or people who haven’t done anything wrong but who frighten them by acting eccentric in public. And they continue to hold up that red herring so that nothing is actually done to protect anyone.

Those are my thoughts.

This is my prayer: I pray for the souls of those involved, and for the soul of the coward who murdered them, that God may forgive their sins and grant them eternal memory. I pray for the injured and traumatized, that they will be swiftly healed. I pray for consolation for the bereaved. I pray for first responders and law enforcement. I pray that cooler heads prevail in the aftermath, that no one does anything to make this tragedy worse. I pray there are no copycat crimes. I pray for conversion for our entire country, that we might develop the backbone to resist the idolatry of the gun.

This is the substance of my thoughts and prayers, on this tragic and horrendous day. 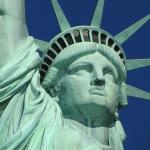 October 4, 2017 The Mirror and the Font
Recent Comments
0 | Leave a Comment
Browse Our Archives
get the latest updates from
Steel Magnificat
and the Patheos
Catholic
Channel
POPULAR AT PATHEOS Catholic
1