When A Bigot Works At the Crisis Pregnancy Center

When A Bigot Works At the Crisis Pregnancy Center December 30, 2017 Mary Pezzulo 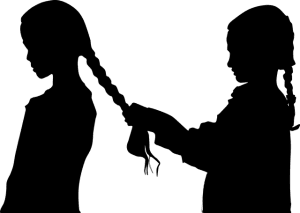 You meet the most interesting people on the internet.

Yesterday I was discussing common misconceptions about food stamps with somebody in a public thread, when the thread was crashed by a woman who claims she volunteers at a crisis pregnancy center. This woman had all kinds of incorrect notions about food stamps and the people who have to use them to stay alive. I’d love to get into all of her blunders in that thread, but I need to focus on one thing she said first of all. Here it is:

I see women going to a crisis pregnancy center driving a relatively new SUV, with a fancy nail job and corn rows, and a new Iphone, and PLEADING POVERTY. We do not suggest they cut back, but find them housing assistance, maternity and baby clothes, and whatever else they need.

There is so much wrong with this quote, but first of all I need to take a minute and talk about corn rows.

For anyone who doesn’t know and would like to, the term “corn rows” refers to a braiding technique wherein the hair is braided right up against the scalp in tight braids. It’s not something you have to get done at a beauty salon (though they can do it for you there as well). It’s just a kind of braid. You can get a friend to braid the parts you can’t reach. It takes time, but then the hair tends to stay that way so you don’t have to do it again for awhile. In fact, I just asked my friend Daniella, who is African-American, and she says she puts her daughter’s hair in multiple braids because a single braid would be too big for a hair tie and little braids are a much easier way to make her hair neat.

Why was this woman on the comment thread offended that poor women she was volunteering to help had braids? What did she want them to do with their hair?  Shave it off? Strew it with twigs and ashes so they looked appropriately penitential? In my experience, judgmental women like this get as upset when poor people don’t look neat and clean as they do when they look like they’ve spent too much money on their appearance. What could they have done to win her approval?

I’ve mentioned before how hard it is for a poor person to look like the “right kind of poor.” There’s a certain note you have to strike when you seek help– you have to dress yourself to look destitute but eager to work, clean but not preened, apologetic and wholesome and humble. I have a “right kind of poor” outfit and hairdo planned out in advance whenever I have to go bring paperwork to Job and Family Services or another agency. I hadn’t fully considered how much harder it might be for a black person.  My limp, wavy red hair can get slicked into a ponytail, but as Daniella explained, that’s not necessarily going to work for her. But if she or her daughter braid their hair because it’s free and less work, they’re accused of having spent too much time and money on their hair.

And that’s just my objection to two words of this CPC volunteer’s diatribe. I haven’t even touched on the rest of it yet. So a woman drives to the crisis pregnancy center for help, in an SUV. Maybe the person seeking help actually needs a car, for work, so she drives it to the pregnancy center to get help instead of leaving it at home and getting on the bus. Maybe she has too many children to fit into a small car and the SUV was the only larger used car for sale at the skeevy dealership that gave her a loan even with her terrible credit. Maybe she wanted a sensible used mini van but couldn’t get one at any place that would lend to her. Maybe she has a rich relative who just bought a brand new SUV, so he had last year’s car cleaned up and gave it to her for a hand-me-down. Maybe she borrowed the SUV for the afternoon. Or maybe she hasn’t revealed that she’s in a crisis pregnancy yet, and her parents are going to take the car away and leave her with nothing when she does. Was she supposed to refuse to take the SUV so that she could look like the right kind of poor person?

December 28, 2017
Paintings of the Flight Into Egypt that Make It Look Like a Pleasant Jaunt Through European Wine Country
Next Post

December 31, 2017 No, We Can't Get Over It
Recent Comments
0 | Leave a Comment
"I was tempted to say that the basic idea was good: If your spouse insists ..."
Linebyline On Catholic Answers and the Problem ..."
"I remember going over to a friend's house back when I was in my final ..."
3vil5triker . The Priest Who Said “Me Too”
"Well, we're all going to be bothered one way or the other sooner or later!Does ..."
JDC1046 On Harassment and Spiritual Abuse in ..."
"I appreciate your response. Gravity does increase, even after it is determined whether the act ..."
JDC1046 On Harassment and Spiritual Abuse in ..."
Browse Our Archives
get the latest updates from
Steel Magnificat
and the Patheos
Catholic
Channel
POPULAR AT PATHEOS Catholic
1