Do you See A Hero or a Suicide Attempt?

Do you See A Hero or a Suicide Attempt? February 25, 2018 Mary Pezzulo 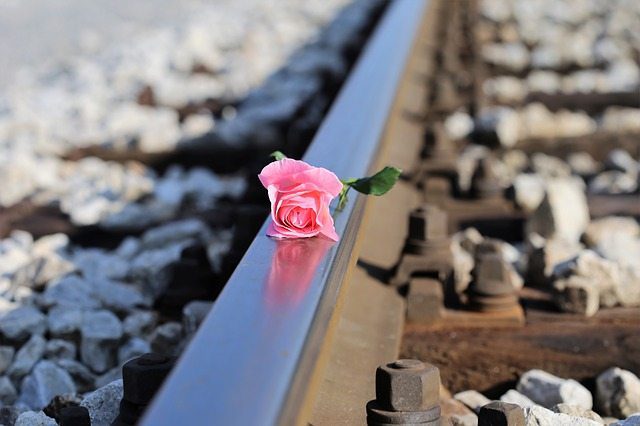 I saw a video today, of an attempted suicide.

That isn’t what I was supposed to see. The video’s captions told me I was watching a hero save a man’s life.

It was shown on one of those public facebook news feeds that promise to bring you good, encouraging news bites all the time, stories of rescued animals and happy adopted children. This video showed cloudy black and white surveillance footage of a train station that could have been nearly anywhere– I imagined it was right here in the United States. A man was flailing, throwing his belongings and panicking beside the track; then he leaped in front of an oncoming train. A woman who was waiting further down the track dashed toward him. She grabbed him by the forearms and jerked him to the sidewalk just in time.

That was all there was in the video footage– no indication of what happened a moment afterward, or an hour afterward, or six years afterward. There never is. All the people sharing the video cared about was the heroic rescue. They reacted to it with those little pink heart emojis and commendations of the woman’s bravery.

“This woman is clearly a hero,” said the caption on the video, and I agree. That was quick thinking and a risky move. If he’d been a little stronger he might have dragged her with him in front of the train. He could have fought her and injured her after the train went by, as well. Thanks to her risk, he didn’t die just then. She should be commended for that, and we all should be willing to take that risk if it came to it.

But I wonder what was happening before, and what happened next.

I wonder why that man was panicking in the first place. I could see him hold a cell phone to his ear and then throw it. Perhaps he’d just been in a painful breakup, or perhaps he’d just gotten the news that a loved one died. It could be that he’d just taken a call from another collection agency he could never hope to pay, and he snapped. He might have been about to get evicted and just found out the place he’d planned to move into wouldn’t take him. Maybe he’d gotten fired that day and couldn’t face going home. It could be that he was being abused or harassed, and the abuser just got ahold of his cell phone number to taunt him one more time.

The woman who helped him just then is a hero. But perhaps this man was a hero. Perhaps he was battling cancer and had just been told there was no more hope. Perhaps was a veteran with PTSD, or a teacher or nurse or public defender who had seen too much and couldn’t take it anymore.

I wonder if he ended up in a hospital. Many mental health professionals care deeply about their patients and do immensely helpful work with them, but I’ve also heard of too many cases where hospitalization was an abusive experience that made the original matter worse. I wonder if he had insurance or if the hospitalization left him with a millstone of debt to pay off. If he wasn’t insured, I wonder if they released him after seventy-two hours with no referral to any long-term help and no way to fill a prescription– such things often happen. I wonder if the medicines he was given were helpful in the first place or just meant to shut him up. I wonder if he got to see a therapist at all, and if the therapist had time to listen. I wonder if there was anything she could do to help anyway.

Where did he go next? Did he go home?

Did he have a home?

Did he have a family?

Did the family care for him? Did they assure him that they were always available to listen? Did they fight to get him therapy or treatment that was helpful? Were they careful not to blame him if the treatment they got him didn’t work? Did they tell him how glad they were he was still alive, or did they pretend his lapse in self-control hand’t happened because it was embarrassing? Did they try to defuse the awkwardness by making jokes about insanity and strait jackets? Did they start to look down on him as the Crazy One who always ruined special occasions? Did they talk loudly to his parents about how patient they were to put up with him? Could he feel that everyone’s gaze on him was different than it had been– worried, confused, contemptuous in a new way?

Did this man have friends?

Did his friends welcome and comfort him no matter how strangely his sufferings made him behave? They surely affected his behavior. Even if he hadn’t had long term struggles before, a suicide attempt is itself a traumatic experience. It’s certain he didn’t go straight back to life as usual, not for a long time. Did his friends understand this? Or did they feign patience at first and eventually shut him out when they grew too frustrated? Did they tell him explicitly not to bother them again, or did they just stop answering the phone?

Perhaps the moment caught on video wasn’t the first time this man had tried to end his life. Perhaps it was the second, or the third. Perhaps he threw his phone just then because his exasperated friends told him to leave them alone and talk to a therapist, but the therapist didn’t have time to answer a call. There was no one left to talk to. There was nowhere to turn. Everyone had written him off as insane.

And a woman was a hero, and stopped him, and the man went back to another stay in the hospital and never saw her again.

The woman was a hero, but I think we need to stop for a moment. We as a society look at that short video clip and see a hero saving a man’s life, but I believe we should be concerned that the hero is what we see first. I believe we ought to stop and look at the man who felt driven to jump in front of a train. We ought to question why our society drives so many to attempt suicide and then coldly torments people who survive their attempt.

We ought to look at ourselves. Would we take a risk to save a life? I don’t mean only risking our lives to pull a man back from train tracks in a single panicked moment. I mean risking our comfortable inertia to question and change society so that fewer people ever feel driven to this choice. I mean risking  our tranquility to accept that man and others like him, to love them, and to be a community for them so that they never suffer alone. I mean fighting to save the lives of those around us every day, instead of in one traumatic moment when it’s almost too late.

The woman was a hero, and should be commended.

But that can’t be enough for us.

If any of my readers is suffering from suicidal thoughts, be aware that you can reach confidential support at any time of day by calling 1-800-273-8255. They also have an option for online live chat.

February 24, 2018
A Humble Request as Winter Wanes
Next Post

February 27, 2018 Seven Last Words: Behold Your Son, Behold Your Mother
Recent Comments
0 | Leave a Comment
Browse Our Archives
get the latest from
Steel Magnificat
Sign up for our newsletter
POPULAR AT PATHEOS Catholic
1