How Not to Respond to a Suicide

How Not to Respond to a Suicide June 8, 2018 Mary Pezzulo 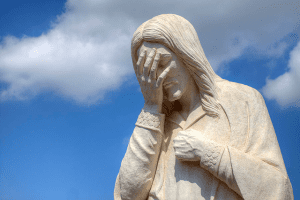 I am not familiar with Anthony Bourdain.

I didn’t know anything about him until I found out he had died today, apparently from suicide. I offer my prayers for him– not because I’m better than he is but because that’s what we ought to do when we hear about a death. I offer my condolences to his family.

I do know that no one deserves the drivel that Bill Donohue just wrote about Anthony Bourdain’s death.

This short op ed, entitled “WOULD RELIGION HAVE SAVED BOURDAIN?” is nasty; it’s mean-spirited; it’s self-serving in the most shameless way; and it dances awfully close to heresy. A person representing an organization literally called the Catholic League ought to be deeply ashamed to publish such a thing. This reads like a caricature of what a mean-spirited atheist thinks Catholics think about atheists.

“If Anthony Bourdain had been a religious man, would he have killed himself? Probably not, ” alleges Donohue, on the same day Boudrain’s body was found dead in a hotel room in France. The man’s body is not yet cold. His many fans are reeling in shock. Everyone including Donald Trump of all people is expressing grief and sorrow, relating stories about how Bourdain’s life touched theirs, and Donohue begins his remarks by chiding a dead man. Donohue is less tactful than Trump.

Donohue mocks Bourdain’s atheism, then goes on to explain that suicide rates have risen in recent years and decry the CDC for not measuring how religion affects suicide rates yet. He goes on to plug his book, The Catholic Advantage: How Health, Happiness, and Heaven Await the Faithful, wherein he claims to discuss this in detail and provide links between religious practice and a decreased suicide risk. He does not give details about his evidence in the op ed; you’ll have to buy his book to find out what he’s talking about. I haven’t bought the book and I do not recommend that my readers do so. Anyone who would behave this callously about a death ought not to be trusted to give reliable information on that topic.

What Donohue does not mention, is that Anthony Bourdain struggled with heroin addiction in his youth.

Addiction is not a character flaw but a mental illness. It’s a lifelong battle, and it is comorbid with other lifelong struggles; twice as many drug abusers as members of the general population struggle with anxiety or mood disorders as well. I don’t know if that particular statistic made its way into Donohue’s book, but it ought to be in there. We know that Bourdain struggled with his mental health. I personally don’t know whether he had depression or anxiety as well. But the chances that he did are high. It, rather than atheism, is a very plausible explanation for his suicide.

And mental illness is not caused by atheism– nor is it something that religion is supposed to cure.

Being a Christian is not a ticket to good health. Christians suffer like everybody else. Christians have to endure poverty and misfortune. Christians get sick. Christians can be born disabled or become that way through an injury; they can be afflicted with chronic illness. They can come down with mental health struggles of all kinds, and they suffer the symptoms of those struggles just as atheists do. Christians feel sad and hopeless for no reason, sometimes. Christians sometimes have anxiety that makes it impossible for them to get out of bed. Sometimes, Christians get addicted to drugs or alcohol and have to work very hard to stop using them. Sometimes, they can be victims of trauma or abuse and develop PTSD. Sometimes, Christians suffer hallucinations or delusions for a brief episode or for their entire lives. Sometimes they find medication and counseling helpful, and sometimes the treatments don’t touch it. Sometimes, they become completely disabled from this and require a lot of care. Sometimes, tragically, they die from that symptom of mental illness which we call suicide.

Sure, miracles can happen through prayer. I have witnessed such things. But barring that, Christians and believers of other types don’t have it easier than atheists or anyone else. Because mental health problems are not spiritual. They’re not sins. They’re sufferings. They’re bad, painful things that can happen to anyone through no fault of their own.

I don’t know what Mr. Donohue’s book is about. I know that in this article he is standing on top of a dead man who suffered from addiction, and plugging his book as a book about how Christians have it easier than non-believers. I don’t know what else one could reasonably expect to find in a book about “how health, happiness and Heaven await the faithful” than fanciful descriptions of how Christians have easier lives than non-believers. He’s advertising this deeply heterodox-sounding thesis while shaming an atheist and claiming that maybe that atheist wouldn’t have died from suicide if he had been a Christian. That kind of behavior is to be expected from some kind of shameless Prosperity Gospel preacher, but it’s absolutely anti-Catholic. It’s nothing like the teaching of the Catholic Church which Donohue makes a living claiming to defend. If it’s half as heretical as he’s making it sound, it’s gravely scandalous.

Suffering is not a sin. It’s something that happens to human beings, whether they’re Christian or not. Sometimes suffering kills you. When you hear of a suicide, you know nothing about the state of that person’s soul from the fact of his suicide. You don’t know if it was, strictly speaking, a free choice to commit a sin or a terrible symptom of a severe suffering. You only know that he was suffering, and that he’s dead. You ought to pray, offer condolences, and work to prevent future deaths. Whatever you do, you shouldn’t climb on top of his corpse to hawk your awful-sounding book. There’s a far better book out there that Christians ought to read, and one of its most powerful lines instructs us not to judge, lest we be judged.

The question is not whether religion would have saved Anthony Bourdain. We might be forgiven for asking whether religion will eventually save Bill Donohue, because the message of the Gospel does not seem to have sunken in yet.

The question is, how can the insights provided by our beautiful faith lead us to comfort others in a tragedy?

And the answer is, in part, not like this.

June 11, 2018 What Awaits the Faithful?
Recent Comments
0 | Leave a Comment
Browse Our Archives
get the latest from
Steel Magnificat
Sign up for our newsletter
POPULAR AT PATHEOS Catholic
1