The Trouble with Warriors 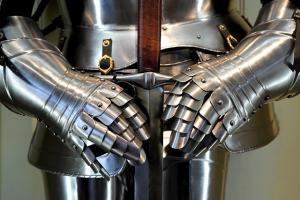 One scene struck me in particular, when I was watching them for the first time. It takes place in Prince Caspian, after the savage battle between the Telmarines and everybody else. Reepicheep has just been patched up and gotten his tail back. Caspian goes to meet Aslan for the first time.

“Do you feel yourself sufficient to take up the kingship of Narnia?” asks Aslan in that weird scratchy lion voice the BBC gave him.

“Very good,” says Aslan. “If you did feel sufficient, it would be proof that you were not.”

I asked my father about this. “What does ‘sufficient’ mean?”

That’s how I learned a lesson that has proven true every time I’ve tested it, from the time I was in Kindergarten to this very day: if you feel that you’re good enough to be king, or anything else of that grave importance, you’re not. If you realize you’re not, on the other hand, you just might be good enough.

My friend Mark Shea recently wrote a thoughtful piece in dialogue with my friend Pete Vere, who is in turn in dialogue with Father Dwight Longnecker. They’re all talking about the imagery of warriors in Christianity– warrior priests; warriors for Jesus; people who talk about Crusaders all the time; the very idea that the Christian life should be viewed as a kind of battle between Christians and any other sort of human being, instead of against powers and principalities. Mark makes a good point about how this imagery has gotten completely out of hand and become very anti-Christian, in the hands of some celebrity priests and others.

I am also skeptical about how warrior imagery has captured the imagination of a certain type of Christian. Yes, Jesus likened Christianity to a battle in some of His parables– “I have come not to bring peace, but the sword.” He also likened the Kingdom of Heaven to a vineyard or a housewife mixing leaven into a measure of dough, yet I don’t see enthusiastic Christians LARPing as farmers or baking housewives very often. He likened Himself to king and also a shepherd and a hen with her brood gathered around her. Enthusiastic young people seem to love the king image; they’ll mock up silly-looking banners, cry “Viva Christo Rey” and cosplay as knights for Jesus,  but they don’t dress as sheep or chicks and practice heeding His voice or reposing with tranquility under His protective wing.

This is understandable for children. It’s fun and romantic to pretend to be a knight. But then grown-ups get in on the act.