Don’t Run Over the Turkey 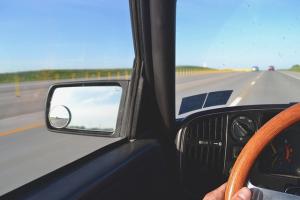 I learned to drive.

Well, almost. I can nearly drive.

A friend gave me an enormous tip on the blog, which a prudent person would have squirreled away and made last longer, but I was desperate to learn to drive. I have a friend who’s going to get rid of a used car pretty soon, and my mother-in-law is moving out near here not long after that, if nothing else goes wrong (it usually does). Mother-in-Law wants me to drive her places in her old age. Things being what they were in the house I grew up in, I never succeeded in getting a driver’s license before I left home. In Steubenville, I was most often too poor or too ill to think about it. Now,  for the first time in my life, I had a bit of money for lessons, a bit of energy, a prospective car and a mother-in-law who needs me all at the same time, so I signed up for six hours of in-cars.

“What high school do you go to?” asked the secretary over the phone.

I ponied up the non-refundable fees in advance and prayed I wouldn’t get sick.

My instructor was a pleasant older man with a “real” Appalachian accent like Betsy the bus driver’s. He had never been in LaBelle before, despite teaching high school students to drive for Lord knows how long, and he was the one who pointed out to me that my street doesn’t have a sign with its name. I had never noticed. Everyone around here knows every street by heart.

He took me to a country road, the first day. “Check your mirrors, check your blind spot, don’t run over the turkey.”

I did not run over the turkey. I did not run over the deer either. The instructor called out “Deer!” and I slammed on the brakes, but he’d only been trying to draw my attention to the pretty young doe on the side of the road. I didn’t run over the mail truck that got ahead of us and kept starting and stopping either. I drove through a deep puddle without anything terrible happening. I didn’t run over anything at all.
“Don’t worry about what anyone else is doin’,” said the instructor. “The insurance is all paid up. Just worry about yourself.”

I enjoyed the country road.

Next, I enjoyed downtown. I chiefly enjoyed that I kept lapping the bus. The Steubenville bus would come lumbering down Fourth Street and I would pass it; then I would drive cheerfully around downtown and catch it again going the other way. I was driving to the thrift store, past the bank, past the Adoration chapel and down to the Greek Orthodox church in the time it usually took me to stand on the corner wondering if I’d missed the bus. A trip to all four of those places would take me hours, calculating waiting, riding, walking around downtown and going back. A car was like a time machine that could zip me around downtown at an astonishing rate.

The instructor pointed out that I kept almost side-swiping things on the right because I was so terrified of being side-swiped by oncoming traffic on the left. Steubenville has narrow roads.
“Remember that a car has two sides,” he said.