No One is a Bicycle: Why we Need a New Pro-Life Movement 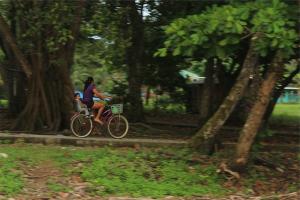 The other day I met a former politician from Rhode Island.

I know he was a former politician from Rhode Island because I asked around; his name didn’t immediately ring a bell. He was telling my friend Rebecca she was a fool and that calling her a fool was actually a compliment, because if she weren’t a fool she’d be a fraud. She was a fool for her work with the New Pro-Life Movement, because only by being staunch Republicans and passing strident laws could anyone ever hope to prevent any abortions. Everyone else, he held, was either a fool or a fraud. He went on for over a hundred comments. He scoffed at, insulted and patronized everyone who spoke to him and told us we were foul or obnoxious when we took offense. Of course I joined the discussion, and he kept on telling me “I don’t know who you are,” as if there was any reason he should know. I am not terribly important. But he expected all of us to know him, and spoke as if he was terribly important indeed. He truly thought that we would be devastated he disapproved of us. I’m sure he thought Rebecca was pleased when he said she “showed promise,” even if she was a fool.

It was at this point I asked around and discovered that he was a community college professor who’d served in the senate of our nation’s smallest state for awhile, more than a decade ago. That was his claim to fame, his claim to be an authority before which Rebecca and the rest of us should be ashamed. The state of Rhode Island is so small and densely populated, I personally assumed that you’d hit a local politician who taught in a community college every time you opened your car door. But this man thought he was hot stuff.

Dozens of comments into the thread he’d initiated to make fun of people, he expressed his whole outlook on the question of abortion:
“It’s enough that I lock my bike to keep it away from bicycle thieves. No need for me to embark on a worldwide crusade to protect property rights.”

He viewed the question of abortion as similar to the question of keeping a bicycle from being stolen: no need to look at why women have abortions, at societal factors driving abortions. No need to improve society to make such a thing unthinkable or to change the factors that make it seem necessary. No need to demand accountability of supposedly pro-life politicians. Certainly no need to be compassionate or helpful towards anyone who’s been abused or been the victim of terrible circumstances. All we need is to restrict the freedom of mothers so they won’t roll away– indeed, to treat women exactly as we’d treat a skittish piece of property. For this politician, that’s enough.

And this is the very reason why we need the New Pro-life Movement; indeed, we need a whole new generation of genuinely pro-life people. Many people are genuinely pro-life; many people love human beings and work tirelessly to save their lives from womb to tomb. I see you, I thank God for you, and I thank you for your witness. Keep it up. But for every person in the pro-life movement who genuinely, sincerely cares for the lives of women, families and children, it seems as though there’s at least one more who didn’t care about people and only wanted to coldly put restrictions on people the way a man locks up his bike. This is true from the local parish level all the way up to the top– indeed, it seems worst of all at the top. And it’s apparently a problem with former local politicians as well.

In a genuinely pro-life approach,  nobody is a bicycle.

August 11, 2018
Eliot, Prufrock, and the Millennial Scapegoat
Next Post

August 13, 2018 We Must Let Children Be Heroic
Recent Comments
0 | Leave a Comment
Browse Our Archives
Follow Us!