The Lesson of the Slim White Disc

The Lesson of the Slim White Disc August 22, 2018 Mary Pezzulo 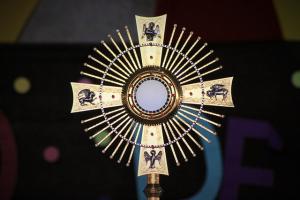 I went to Adoration yesterday.

I didn’t feel like praying, but I needed the quiet.

I needed to look at Him and ask what He meant by all of this.

My faith has been reeling for a week, of course– for years, if I’m honest. Steubenville has never been the best place to live, if you want to maintain your belief that Christ is real. Apparently Pennsylvania is worse, and I have no reason to believe that there isn’t enough worse to go around, all over the world.

As usual, the Catholics we thought were the very best have proven to be frauds and abusers. Yet here I am in the middle of it, convinced that Christ is real and that He is to be found in the Holy Eucharist, and what am I to do?

I sat with Him for awhile.

The God beyond all praising whom the Heavens cannot contain was a white disc, about the size of a silver dollar.

I have seen Him even smaller than that. I have seen the priest break the Hosts in half so there’d be enough for everyone– and everyone who received even a crumb of the Host received the entire God.

Once when I was leading the singing at Mass on the Franciscan University campus, in that awkward tangle of microphones off to the side of the altar, I saw the priest elevate the Host, sideways, and I was looking at the God Enthroned above Cherubim, a sliver the thickness of a paper envelope. The sun was so bright from the stained glass window on the other side of the priest’s hand, I could barely see Him. The priest was in billowing green and gold vestments, a solid body, an important person, standing behind the altar for all to see. The Lord was naked and bare, a slim line an inch long, between two glowing panes of red and yellow glass.  Behold, the Lamb of God. And then the priest broke the white into bits, chewed Him up and ate Him, and the people did the same, and Christ was enthroned in all of us, but I couldn’t see Him at all. I saw people.

Imagine that there was a God who chose to be small, and helpless.

Imagine that, in every way He could have chosen to be great, He chose to be small. He chose to become a zygote smaller than that thin white sliver, in the body of a young woman of no particular standing, of a race that was despised by everyone, at the farthest edge of an empire. He was born into poverty and homelessness, carried into exile because of a genocide, raised in a town from which nothing good had come. He was a manual laborer and then He was homeless, wandering from place to place, preaching mercy. Foxes had dens and birds had nests, but the Son of God had nowhere to lay His head. He was not a warrior or a hero or an earthly king but a Man who spoke truth, who healed the wounded, who scandalized by forgiving sins.

And the He died, horribly, to all the world a failure and a curse, torn to rags, stripped naked, hung up on splintered wood to suffocate over the course of three hours.

The important people did that to him. The centers of attention, the ones who stood at the front in gold vestments for all to see. 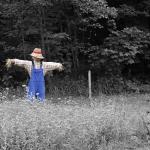 August 23, 2018 Something Rotten in the Diocese of Arlington
Recent Comments
0 | Leave a Comment
"Agreed."
BensNewLogin A Picture of the Sun
"Yeah, I'm just trying to tune it out at this point. I really am."
Mary A Picture of the Sun
"The only thing I can think about the whole situation, is that while the attacks ..."
3vil5triker . A Picture of the Sun
"I don't think anybody who reads your blog thinks you are a failure. On the ..."
alwayspuzzled A Picture of the Sun
Browse Our Archives
get the latest from
Steel Magnificat
Sign up for our newsletter
POPULAR AT PATHEOS Catholic
1