The Child in Their Midst 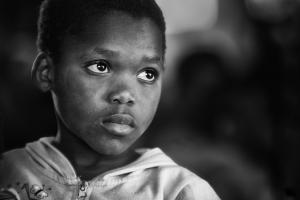 Jesus and his disciples left from there and began a journey through Galilee,
but he did not wish anyone to know about it.
He was teaching his disciples and telling them,
“The Son of Man is to be handed over to men
and they will kill him,
and three days after his death the Son of Man will rise.”
But they did not understand the saying,
and they were afraid to question him.They came to Capernaum and, once inside the house,
he began to ask them,
“What were you arguing about on the way?”
But they remained silent.
They had been discussing among themselves on the way
who was the greatest.
Then he sat down, called the Twelve, and said to them,
“If anyone wishes to be first,
he shall be the last of all and the servant of all.”
Taking a child, he placed it in their midst,
and putting his arms around it, he said to them,
“Whoever receives one child such as this in my name, receives me;
and whoever receives me,
receives not me but the One who sent me.”

This was no small thing that He did, and He knew that.

Jesus grew up in an occupied land, a child of a despised race. As an infant He was carried as a refugee to the nearest border, to save His life, because He was a child of a despised race. There was no one lower in all that vast empire than a little child of Galilean descent– no one who counted for less. Herod the Tetrarch wanted such children dead, because he viewed such children not only worthless but dangerous, pests, vermin, rats who might cause a dangerous insurrection and kill somebody Herod thought was worthwhile– perhaps even Herod himself. Hundreds of such children were murdered for the good of the state, because they were worthless. Christ escaped because His mother and foster father fled to Egypt and hid there for three years.

Then He was brought back to Nazareth and lived in the shadow of the empire that had killed so many of His countrymen– a child of a despised race in an occupied land, the lowest and the least.

He grew to be a man and went about the country, preaching things that people did not want to hear. He preached that the Son of Man was to be handed over to men, and they would kill Him, which was to be expected. They nearly had already at least once. But He also preached that the Son of Man would rise from the dead, and no one understood what He meant.

When they argued about who among them was greatest, he revealed to them a mystery: “If anyone wishes to be first, he must be last of all and servant of all.”

He took a little child of a despised race, the lowest and the least, the least important person there could ever be, and set him in their midst. He embraced that child, the child in poverty, the child in ever-present danger of genocide at the king’s whim, the child who had nothing to offer– the child who was everything that Christ chose to become, when Christ became man. And He embraced that child in front of everyone. And He said, “Whoever receives one child such as this in my name, receives me; and whoever receives me, receives not me but the One who sent me.”

So often this Gospel passage is written off as cute.

It’s anything but cute. It’s inconvenient and deadly serious.

Christ is hidden in the person who has nothing.

Christ is hidden in the person who cannot pay you back.

Christ is hidden in the person that society wants to get rid of– for the good of the economy, for the beauty of the neighborhood, for safety from insurrection, for any well-meant reason.

Christ is in people.

If you do not embrace the child, you cannot receive Christ or the One who sent Him.

September 24, 2018 To the Family With the Disabled Boy in Church
Recent Comments
0 | Leave a Comment
Browse Our Archives
Follow Us!