The Shadows in Columbus 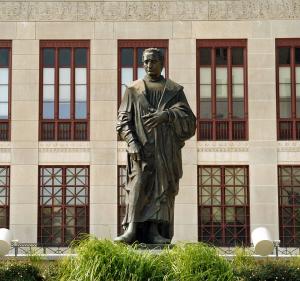 I think I was in the first grade.

There was an enormous bronze statue by the capitol building, of the famous and lauded explorer Christopher Columbus; his hands and feet were quite large and worryingly gnarled. I found out much later, when I studied art history, that artists usually make the hands and feet of bronze statues oversized because bronze is black, and black makes it hard to see shadows. The darkness of bronze swallows nuanced detail and will make your entire composition look smooth and simple, if you’re not careful to show the complexities on purpose.

As a child, I suppose I thought that the esteemed explorer Christopher Columbus was a heroic man with ugly hands, when I thought of him at all.

Columbus, Ohio also has a life-sized replica of Columbus’s flagship, the Santa Maria, docked at anchor in the Scioto river; they built it to be an exact match, and even put rubber rats in the hold. If I recall, they were just building that replica ship when I was in the first grade, and I was excited to go and see it. Some of the children from school were foolish and thought that that exact place on the Scioto marked the spot where Columbus first set foot on the New World. I knew they were silly. Columbus never set foot on this part of the New World, the part I referred to as “real America,” at all. Columbus only went to the Caribbean, when he meant to go all the way to India to prove the world was round when everyone thought it was flat. It turns out that that isn’t true either. Most people knew the world was round. But I felt smarter than my classmates in the first grade.

We were excited that year, because it was a special anniversary: five hundred years since Columbus discovered America in 1492. Five hundred years of America being inhabited, or at least inhabited by the people who came from Europe. Five hundred years from the great voyage of Columbus, and we were in the city that bore his name, with his statue in bronze that hides the shadows proudly standing downtown. They were building a boat in his honor in the Scioto river, a boat named for Our Lady, to commemorate his bold voyage to the New World that wasn’t really new, to demonstrate the world was round when most people knew that already.

We celebrated with video presentations and special projects. I colored a small paper Santa Maria and glued it to a craft stick. We memorized “In fourteen hundred ninety two, Columbus sailed the ocean blue.”

A professional Christopher Columbus impersonator came to our school assembly. He dressed in a replica Christopher Columbus costume and spoke in that snooty upper-class English accent that every American believes was the natural accent of famous Europeans in history– or, at least, the accent they’d have chosen to speak in if they’d been privileged to speak English. He answered any questions we threw at him about Christopher Columbus, the culture in Italy at the time, his tense relationship with Queen Isabella.

One little boy threw himself into disgrace by asking why Christopher Columbus wore “Green pantyhose.” The whole school assembly burst into uncontrollable giggles as the indignant Christopher Columbus impersonator protested that the name of the garment was “stockings” and every Italian man of the era wore them.

The teachers didn’t say much about what Columbus did when he arrived in the Caribbean and met the people who were already living there– only that the indigenous people were silly and assumed he was wearing such elaborate clothing to hide the fact that he had a tail. They told us a fact that shocked me: the heroic Christopher Columbus was actually considered a failure, having not discovered any gold to bring to the New World. And they didn’t tell us what he did bring back, the thing he found that was so financially lucrative as to get people interested in the New World.

I found out when I grew up that Christopher Columbus sold people. 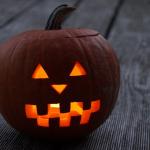 October 8, 2018
A Series of Mishaps and Rescues
Next Post