Let it be an Ordinary Day 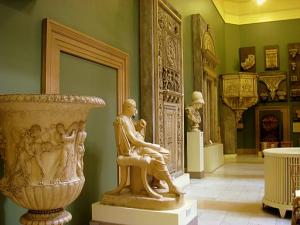 Have you ever found yourself in a museum, when you were terribly anxious?

Anxiety is one of the two hundred possible symptoms of fibromyalgia. It’s something I live with from time to time. I wake up with a strong, heavy, nearly physical sense of impending doom gnawing at my stomach. It’s not that this day and age we live doesn’t give one enough reason to be anxious; it’s just that I know my anxiety would be here anyway. I often find myself like this.

Some people can calm their anxiety by going to a place where there are happy people and letting the happiness rub off. As for me, I’m the opposite. Being anxious around happy people just makes me feel like I’m spoiling their fun, so I like to go off by myself. I stayed at my Pittsburgh conference as long as I could, trying to look professional while anxiety gnawed at me. It was a beautiful conference, with many excellent lectures on art and literature that are my passion. I felt I should have been perfectly happy. On many levels, I was happy and having a great time. But the anxiety kept gnawing right along with the happiness. Finally I skipped one session and a social, to walk down the street by myself and visit the Carnegie museum.

I didn’t want to see anything contemporary. I didn’t want to think about the world I live in now, not the natural world or its human cultures either. I wanted to see something old.

I wandered into the Halls of Architecture and Sculpture. The Carnegie museum has an enormous room crammed full of plaster replicas of famous things I’d have seen if I’d ever made it to Europe and Africa– statues and tombs, the towering facades of cathedrals, one of those alarming Madonnas from a Gothic Medieval church whose smile is far too eager. I stopped and invoked the patron of each cathedral as I walked by. Save us. Pray for us. Pray for us. Help us.

There was a giant marble sarcophagus from the ancient world, a tomb of some sybil or other– again, not the real tomb, a plaster cast of a tomb for a person who is actually buried somewhere in Southern Europe.

I found myself starting to say “Pray for us” again. Pray for us, every soul who sought Wisdom the best you knew how.

And then I saw a personification of wisdom, according to the ancient world– the hacked off head and shoulders of a colossal statue of Athena. That stern and androgynous gray-eyed goddess, also plaster but looking like marble, set not ungracefully on top of a plaster column. The collar of her robe was all writhing snakes. Somehow, I never knew that Athena was associated with snakes. Owls, yes, but what have snakes to do with wisdom?

I found myself gazing at her reverently, as if she were an icon, out of habit. I almost said “pray for us.”

Thousands of years ago when this statue stood in a temple, people must have crowded there to see her every day. Surely some of them were like me, tourists only looking for an aesthetic object to gawk at and entertain themselves. It’s nonsense to assume that kind of person only exists in our contemporary society. People are always the same. There must have also been people who invoked her for their own selfish ends– idolatry indeed, and idolatry of the worst kind. But there must also have been sincere people, who invoked her for the gift of wisdom. And surely their petition was heard by Heaven, and the true Wisdom answered their cry. God must have. Wisdom is not proud.

I walked down a line of ancient gods, heroes, a naked athlete lobbing a discus. At the end of the line was Winged Victory, the Nike of Samothrace. I don’t think you can get very close to the real Winged Victory in Paris, but the plaster cast in Pittsburgh is right down at eye level, immanent. You could touch her if you dared, which of course you mustn’t. Mortal men shouldn’t touch such things. Victory used to have a head and hands, Athena used to have a body, but now they don’t. Now Athena is a colossal head on a pillar, helpless, and Victory is a robe and wings, billowing in a wind that died down millennia ago, all power and hubris with no direction or order. One of my history professors, the one who came from Greece, said Athena and Nike are often one and  the same. I thought about grafting that gigantic head onto the graceful body of Nike of Samothrace, and smiled.

You have to ask a history teacher about Athena and Nike, because everyone who prayed to these gods in their temples is dead. Their civilization is a part of history, their religion an antiquity, their idols broken up and copied and carried to museums where tourists gawk for entertainment and sometimes sincere souls come seeking wisdom.

I didn’t want to think about dead civilizations.

I got in an elevator and found myself near the Egyptian display– some more replicas, and quite a few real artifacts. I love ancient Egypt, but I hate that gallery. It’s on the top story, surrounding the atrium where the floor falls away and you can look down three flights of stairs to the marble foyer. I can’t stand any building with an atrium like that. I avoid them, in museums or in shopping malls or anywhere else, because I’m terrified of heights. Vertigo overwhelmed me immediately; I hugged the wall so closely I nearly ran into a giant black cast of a seated pharaoh.

I didn’t say pray for us.

I ducked into the display on mummies. These were real mummies, real remains, not replicas or casts. There were cats, ibises, all kinds of sacred animals preserved in jars; there was also a human skeleton in fetal position, half-buried in sand to show how it had been dug up, and two neatly wrapped corpses. One was a child with macrocephaly, though the informative cards stressed that they couldn’t guess the cause of death. Eternal rest grant unto them, O Lord.

There was a short corridor with pictures of all the major gods: Isis, Osiris, Anubis, Nut, Ra. Everyone who invoked those gods for some cause that was just, right, merciful and good had their prayer heard by Wisdom, I’m certain. And those who didn’t– those who only served themselves? The sea opened up to let their victims escape; then it rushed back and swallowed them. The ancient Egyptian civilization held on for quite some time after that. But, eventually, it died. Things that were once modern became ancient. Tombs that were once sacred ground became archeological digs. Bodies were disinterred and placed in museums for tourists and seekers of wisdom alike, and some who come to see them still pray mercy on their souls. Eternal rest grant unto them, O Lord.

I didn’t want to think about that either. 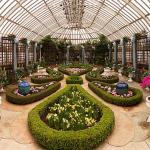