The Pro-Life Movement and the Abduction of Baby Hitler

There were heroic people in Germany and in Austria, in France and in Denmark and Norway. There were heroic people who were priests and nuns, doctors, nurses, teachers. Sometimes those people were caught and executed along with the ones they’d tried to protect. They knew that might be the price they’d pay, but they did it anyway.  They had heard the same propaganda as everybody else, but they realized it was garbage. They valued human life enough to fight for it–smuggling babies out of the ghettos, hiding their friends in closets and attics, bringing families to Sweden in fishing boats.   For that, they were considered traitors, enemies of all the good that Hitler was supposedly trying to do.

And I think that’s the lesson that people who value life– truly pro-life people– should learn about Baby Hitler.

If you find that a Baby Hitler– someone who was a lot like you, maybe someone who practices your religion and seems to be a part of your in-crowd– has grown up to make some very bad choices, you must not allow tribalism to keep you from seeing that he’s wrong. If a whole group of people who are very like you and share some of your values are not only condoning but glorifying terrible abuses, you must stand up against them. And you ought to keep doing it even if you’re called a traitor.

If men who used to seem trustworthy, men  who proudly wear the Precious Feet lapel pin and pray for unborn babies, have gone off the deep end; if they’re not only condoning but cheering putting children in internment camps because a political leader says it’s necessary, you have to denounce them and fight them however you can. If a whole movement of people claiming to only want to protect the rights of one type of child, have allied themselves with men who want to take thousands of children away from their parents and abuse them in inhumane conditions because those children’s parents committed a misdemeanor– or worse yet, when they came seeking asylum, which is legal —   you have to realize what you’re seeing. You have to realize it’s the same thing when they’re perfectly happy to cheer for someone who would de-rail the entire government, endangering far more lives, in the name of a racist border wall which will not make anyone safer. When they are welcoming and babying neo-Nazis as if it’s ever okay to ally yourself with a Nazi. Where will they go from here?

No, not all pro-life people do this. Of course they don’t. I’m pro-life and I don’t.

But you’d have to be naive in the extreme to not see where things are going– have gone, as a matter of fact; it’s already all around us. Goodness, I just heard of a popular conservative commentator who stood up to address an anti-abortion rally and told them that the pro-life way to prevent evil is to take certain kinds of children away from their parents and have them raised somewhere else; that that is what a pro-life person would do. That is certainly not the suggestion of someone who thinks that (as John Paul II phrased it) “family constitutes one of the most precious of human values.” But after the news cycle of the past year, that was what he chose to say, about Baby Hitler.

The question isn’t what a pro-life person would do to Baby Hitler.

The question is, what we will do now that he’s grown up.

(image: a photograph of the baby Adolphus Hitler, via Wikimedia commons, in the public domain.) 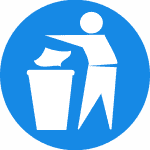 January 17, 2019
To Anyone Going to the March for Life This Year
Next Post