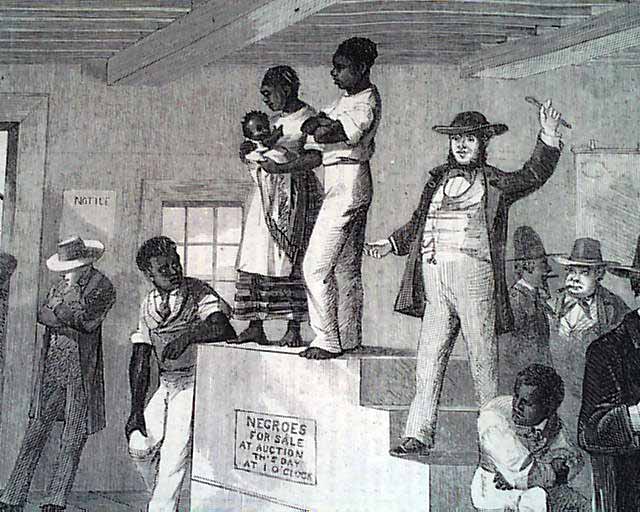 Today, I read an article over on Aleteia that made my jaw drop. As an American, and a descendant of Irish immigrants myself, I am accustomed to hearing Irish immigrants glorified as plucky heroic saints and slavery dismissed. But this article, penned by Larry Peterson, is in a class of its own. It tells the story of the immigrant Michael Morris Healy and how he got six of his mixed-race slaves educated abroad and into seminaries and convents. And it paints the man as a hero.

“In 1818, Michael Morris Healy left Ireland for America and settled in what is today, Macon, Georgia. Through hard work and smart business dealings combined with some good luck in the Georgia land lottery, Healy managed to become a successful cotton planter, owning 1,500 acres worked by 49 African slaves. Among them was a 16-year-old girl named Mary Eliza Smith.”

For those of you who don’t know Georgia history, the Georgia land lottery was the redistribution of stolen Native American land to white people.

So, Healy left Ireland for the part of America where slavery was rampant, made some money through luck, ended up owning stolen land, and then he used that lucky money to purchase 49 kidnapped and tortured human beings. Forty-nine children of God, with infinite value in the eyes of the Father. Forty-nine living icons of Christ. Forty-nine of his equals according to the Law of God, who were considered livestock to be tortured into submission in the eyes of men. Forty-nine people whose rights were not recognized, who were ripped from their mothers’ arms and sold at auction. Forty-nine human souls who had been whipped, starved, raped, branded and tormented and then sold at auction as if they were cows. He didn’t look around himself at the horrific barbarism of slave owners and high-tail it for the North, or Canada, or even back to Europe. He joined in the structure of sin and bought forty-nine human persons including a teenage girl.

“Healy fell in love with the young woman, but there was a problem. Michael Healy was a devout Irish Catholic and Mary Eliza was an enslaved person. She was mixed race, half African and half white, an intermarriage was illegal. Michael Healy decided to take Mary Eliza as his common-law wife. Although their “marriage” was illegal, the couple lived together as any other husband and wife. They would go on to have nine children together.”

Now, according to Catholic canon law the last time I checked, as well as according to common sense, a woman who is taken captive must be returned to her real home for a time before she’s allowed to marry her captor. This was not exactly possible with American race-based chattel slavery, but it’s definitely wrong for a man to have sex with a sixteen-year-old girl who is his property. Mary Eliza couldn’t leave; she couldn’t go back to her parents if he abused her; she may have liked Mr. Healy as much as she’s said to have liked him, but if she didn’t she’d have been forced into this anyway. She was not an equal partner capable of giving consent. And Mr. Healy didn’t move her to a part of the world where he would be legally able to give her her freedom and THEN propose to her. He kept her on the plantation where she was, legally speaking, a piece of property that belonged to him like his horse and his boots. And he had sex with her at least ten times. That’s not a “common-law wife.” A common-law wife is an adult free person who willingly consents to live with someone as their sexual partner for so long that they legally count as a “couple.” A slave and her master who won’t take her to where she can live as a free woman don’t count as a couple. They remain slave and master. This is not a common-law marriage. She was his concubine and he raped her.

I also think it’s precious, considering how much garbage that Catholics often give people who are only married according to common-law, that Peterson is treating their so-called common law ‘marriage” as if it’s a good thing. I wonder if Healy was denied Communion.

“Under Georgia law, children of enslaved people were considered enslaved themselves, and were prohibited from going to school and being educated.” So, did this cause Healy to realize that he was taking part in an horrific structure of sin, give up the wealthy plantation-owner life, repent of his crimes and move his slaves to Canada where they could be free? Canada abolished slavery in 1833 when the eldest Healy child was a toddler; that would be a great time to flee. But no, he just sent his children to boarding school in the north or in Canada or Europe. They were mixed-race but “passed” as white, you see, so he could get away with that.

Three of the children became priests and three became nuns, and that’s wonderful and all. And yet, in a way, it’s not, because what else could they do? The children were black according to the one-drop rule and not real citizens. The men couldn’t vote; no woman could vote in the first place. No one was exactly lining up to marry the children of slaves. Their prospects were pretty slim. So they ended up in convents or ordained. If they had had the full range of choices that were open to white people with the same education and they’d freely chosen the consecrated life, this would be a great story. But they were slaves, only educated because their father who was their Master allowed it on a whim, and by his permission they ended up in seminaries and convents.

The oldest, James Augustine Healy, became a bishop, and that’s unironically beautiful. I wish the story had been about him and not his selfish father.

The youngest child of Michael Morris Healy was orphaned at two years old, and “perhaps never found his niche in the world.” That’s a really sweet way of saying that he was two years old when his master, who was also his biological father, passed away and he became the inherited property of somebody else.

That’s all the information the article gives us. I tried to research the family online but all I found was that Michael Morris Healy and his enslaved concubine “intended to move north with their remaining children” but never made it because they died suddenly. Which ought to be a parable for us all. Ye know not the hour or the day. Repent of your sins now, not when it’s convenient, because you might die at any minute. I also found that their son Hugh “risked his freedom” to come to Georgia and rescue his three siblings. Because he was still, legally, a slave, and his siblings were slaves, and he could have been captured by slave catchers and given to whoever inherited Healy’s property. Thankfully, they escaped.

Their escape also ought to be the main point of the story– not a man selfish enough to buy 49 humans, father 10 children (one of whom died in infancy) on a slave girl and not actually take quick steps to make sure those children were raised in a country that treated them as human persons. I want to read about the courageous mixed-race young man, not yet twenty-one years of age, who went back to Georgia despite all the risk to save his family. Instead, we get an article glorifying the plucky Irish Catholic Michael Morris Healy, who was, as far as I can tell, a selfish pig who bought human beings, profited from their labor and didn’t take adequate care that his own children would be safe after his death.

And not a word is written about the other forty-eight slaves, the ones Healy didn’t want to have sex with. His so-called common-law wife, as far as I can tell, remained in Georgia as a slave. And those other slaves did as well. Maybe after his death they were liquidated at auction and all the families that had formed broken up. Maybe some of those slaves had had children of their own by this time, children worth no less in the sight of God than Healy’s mixed-race sons and daughters. But those children were ripped out of their mothers’ arms and lost to history.

This isn’t cute. It isn’t a cool story about a hardworking immigrant whose children became religious. It’s a testimony to how evil our history really is, and how complicit white immigrants were in that evil. It’s also a testament to how Catholics in every generation have played along with the structures of sin of their day and gotten rich off of them. Michael Morris Healy isn’t a son of Erin we need to be celebrating; he’s more like the slavers who kidnapped Saint Patrick.

We all need to repent.

In every generation, Catholics need to realize that we are no different than the rest of our culture. We need to recognize sin where sin is present in what the world sees as harmless or necessary, and we need to repent and fight against it, but so often we do not. We play along. We pretend that being Catholic makes us good people right off the bat, and we conform to the ways of the world.

The story shouldn’t be “Huzzah, some slaves became priests and nuns. ” The story should be shame that a Catholic man ever got himself in a situation so sinful that his children were legally his slaves. There are many Irish immigrants that deserve our celebration. I have some fun ancestors on the O’Keefe side. Michael Morris Healy was not anyone we need to be glorifying.

May God have mercy on the soul of Michael Morris Healy, and may He grant all of us the spirit of true contrition. 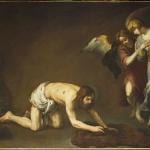 March 9, 2019
Blasphemy, Scandal and the Divine Victim
Next Post

March 10, 2019 More on Christ the Victim, And the Necessity of Speaking Out
Recent Comments
0 | Leave a Comment
Browse Our Archives
Follow Us!