Triduum and the Mystery of the Atonement

Triduum and the Mystery of the Atonement April 18, 2019 Mary Pezzulo

“She completely misunderstands the Atonement” Is such a strange thing to say.

Someone said it about me the other day, and it seemed so obviously truthful as to be absurd. Of course I completely misunderstand the Atonement. Everybody does except God Himself. It’s one of those things that can’t be spelled out in a sentence like ordinary knowledge.

As far as I’ve been given to understand, some of my Protestant brothers and sisters– not all, not even most, but a certain school– have a notion of the Fall and the Atonement that goes something like this:

‘In the beginning was God the Father, and God the Father was a terrible abusive grouch. We’re not really allowed to call Him a terrible abusive grouch, of course, because He will be angry with us. But we’re allowed to talk about the things He did. God the Father created the earth in seven literal days, and then He created two naked people and placed them in a paradise in which there was a literal tree with poisoned fruit.  He told them not to eat the fruit, but the naked people were so stupid they ate it anyway just because a snake told them it would make them wise. And God the Father was so angry with them that He cursed His whole entire world to death and entropy. He also condemned the naked people and all their descendants to a lifetime of shame and hard work ending in the pit of hell. Jesus Christ, our codependent older Brother, jumped in front of His angry Father and accepted as much of this wrathful punishment as He could take upon Himself instead of letting it fall on us, and so everyone who does exactly what this same Christ says will be spared the Father’s wrath. Instead of Hell, we will have the privilege of living with our abusive Father in Heaven for all eternity. Why we would want to, is another story.”

This is not what I believe.

And one day– speaking figuratively, because there are no days outside of time– the Father determined to give the Son a beautiful present, and the present was you and me, each of us individually the very best present the Father could come up with for His Son. And at the very same not-time,  the Father also thought of us, and how He would love for us to exist and be One with Him, and how much He would love to give His only-begotten Son to us for a beautiful present. His intention was both of those things together as one idea– us perfectly happy and His Son delighted. The Father can’t will things halfheartedly the way humans in our finitude have to do. The Father is a Being who pours His whole Self out; He doesn’t ever do things by halves.

The Son fell in love with us at once. He said that He Himself would become human like us and walk among us. The Father was always going to lift us up to Paradise to be one with the Holy Trinity, but this was the way that the Holy Trinity decided to work it out– by God becoming Man, so that Man could become God.

And again, that’s a mythical, poetic way of speaking as best I can about the Mind of God, which is infinitely beyond me.

So God Who never does anything by halves created a universe: impossibly vast, impossibly complex, impossibly beautiful, full of things He thought we might like to see and learn about like comets and nebulae and atoms. And in a favorable part of this universe He placed a planet that could sustain the kind of life He decided humans would have, and He watered the soil of the planet with liquid water, and through ways I can’t explain to you He made living things to rise out of that primordial mud He’d made. And the living things bred and died for millions of years and some of their bones became fossils because God thought we might like to dig up fossils and admire them. And eventually, we existed.

And then we sinned.

I can’t explain that bit. Sin doesn’t really make sense. Everything that is what it should be is good, and everything that falls short of the mark is bad insofar as it falls short, and choosing to sin means choosing to fall short of the mark on purpose. Some traditions call every falling short of the mark, even by accident, even in purely natural things like getting sick or falling asleep when you didn’t mean to,  sin, but I’m talking about a choice for sin. I guess the easiest way of explaining it is to say that it’s like eating the fruit of a tree you know to be poison, even though your loving Father told you not to, because a serpent told you it would help you see the difference between good and evil.

In any case, we sinned, we fell from grace, we aren’t what we should be now– not in our bodily life and certainly not in our walk with the Father who loves us with everything the Father Is, because the Father doesn’t do things by halves.

And what about the Son? He was going to come be with us as a human, and in being with us draw us up into Paradise. But being human meant being in a fallen place full of horrors, where people behaved horribly and had horrible things happen to them. It would even involve a descent into Hell– Hell being the name of the void you turn toward, when you turn away from everything that is Good. Everyone who has turned away from Good has been to hell, a little.

He chose to come anyway.

He chose to become a Man like us in all things but sin: a Man with a Body and a Soul, a certain DNA pattern, belonging to a certain tribe of a certain race of people in a certain place at a certain time.

On the night before He was to suffer, that is, tonight, He took bread, broke it and gave it to you, saying “This is my Body.” And you received the Body of Christ and were made one with the Body of Christ. And then He sang a hymn, and went out with you to Gethsemane, and suffered agony with you. And then He went with you on your Via Dolorosa, carried you on His shoulder, and suffered all of your pain in His own flesh. He was nailed to your cross, consummated the marriage and drank the wine with you, and then He gave up the Ghost and descended into your hell.

And then He rose, drawing you with Him, and now you have hope. Even though you are not  yet home with Him in Eternity, even though you may feel at this moment that you are still on the cross or in Hell, and that He has abandoned you. Because you are one with the Body of Christ, and as surely as you drank the chalice with Him, He will draw you into the eternal Life of the Holy Trinity.

Of course I don’t understand the Atonement. 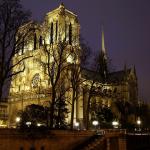 April 16, 2019
A Suggestion as we Mourn the Fire in Notre Dame
Next Post 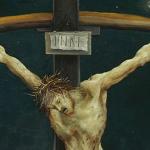