Imagine a Flock of Tongue-Cut Sparrows 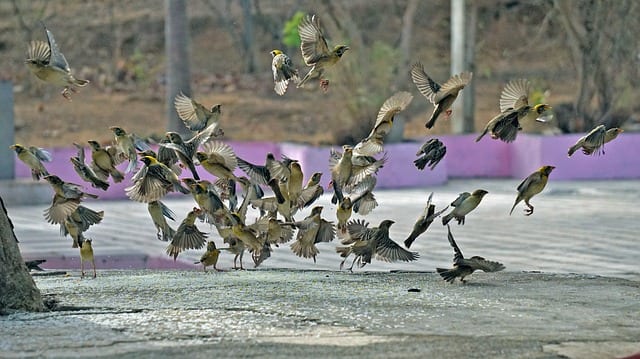 At my grandparent’s house in Maryland, there was a three-volume clothbound set of sparsely illustrated children’s fairy tales.

This was what I got for a bedtime story, almost every time I went to visit. At home I usually had Curious George, Babar the Little Elephant or Island of the Skog.  But when we went to my grandparents’ house, we left the picture books at home. At night, when I sat up in bed in the spare room where my mother used to sleep and asked for a story, my parents or grandparents would reach up on the shelf, and take down one volume from those books of fairy tales– always the same one.

They always read me my mother’s favorite story, and never a single other story from that collection.

That story was called “The Tongue-Cut Sparrow.”

I’ve seen a few different versions of this folktale. The version I remember was like this: once upon a time, there was a poor old man and a poor old woman who were goodhearted and kind. They had no pleasures in their simple life, except the song of a sparrow who came and perched near their house in the evenings. They loved that sparrow like their own child.

Next door, there lived a wealthy woman in a great big house. This woman had all the pleasure and ease money could buy, but she was envious, avaricious and unhappy. One evening she was annoyed to see her poor neighbors listening to the sparrow’s song with an innocent pleasure that she could not share. So she caught the sparrow, cut off the tip of its tongue, and threw it out to die.

The old couple went searching when their friend failed to show up and sing that evening; they found the bird and nursed it back to health. When she was well, the bird revealed that her mutilation had cost her the ability to sing– but now, she was able to speak. And she invited her generous friends to dine at her home.

How, exactly, two full-grown human beings fit into a sparrow’s house wasn’t addressed in the text. But in any case, one way or another, the virtuous old couple went to the bird’s house. They met her family. They ate a lavish meal, better than they had ever had. And then they relaxed and listened as the bird told them wonderful stories, long into the night. At the end of the evening, the Tongue-Cut Sparrow offered them a gift to take home– they could choose between a small or a large treasure chest.

The generous couple modestly accepted the small treasure chest. They took it home and opened it, to discover it was full of gold, and they used the gold in moderation to live a happy life. When their envious neighbor saw them making improvements to the house, she asked where they’d gotten the money, and they told her. They gave her directions to the Tongue-Cut Sparrow’s house. The greedy woman went there, uninvited; the Tongue-Cut Sparrow welcomed her in anyway. She gave her a supper which she didn’t enjoy and told her stories she couldn’t appreciate. Then she offered her a gift– she could take home either a small treasure chest or a large one. The greedy woman snatched the large one and opened it.

I don’t need to tell you what was in that chest. We’ve all heard fairy tales with this sort of ending a hundred times; they seem to exist in every culture. The greedy, abusive woman found that the large chest was full of demons and snakes and stinging insects that pursued her until the end of her days. The kind elderly couple moved into her vacant house, and lived happily ever after.

I think of that story often, now that I am a tongue-cut sparrow.

After the time when it all went wrong, the emotional and spiritual abuse, running away to Steubenville and finding it as bad and worse: I will never be what I was before and I can never again do what I used to do. But I can speak.

And I find that the more I speak, the more I gravitate toward other tongue-cut sparrows.

I don’t want to be with people who only know what it’s like to have an easy life. I am tired of people who are offended when the poor find some innocent pleasure they couldn’t afford to pay for if it cost money. I tried to be myself in front of such people, but first they found my song offensive. And then, when I couldn’t sing anymore, I began to speak and tell my story, and this appalled them even more. And then the violence they were keeping inside engulfed them, and they disappeared.

The only people I ever manage to be friends with are those who lost a beautiful gift and were mutilated and cast off as nothing– people who need the help of others to be healed and will never again be what they used to be. Such people are able to speak in a way they hadn’t before, a way that calls to other tongue-cut sparrows. I like to hear their stories and tell them mine.

Have you ever seen a whole flock of drab brown sparrows crowded around a feeder or a small pile of crumbs? Now, let’s pretend that none of those sparrows can sing anymore because they were deliberately mutilated. Imagine that, instead of singing, they’ve learned to speak.

Imagine the stories they could tell you, and the treasures you could take away, if only you would listen.

Imagine a flock of tongue-cut sparrows.

That’s where I want to be.

January 28, 2020 Nothing New Under the Stars
Recent Comments
0 | Leave a Comment
Browse Our Archives
get the latest from
Steel Magnificat
Sign up for our newsletter
POPULAR AT PATHEOS Catholic
1