A Rose in the Plague Time 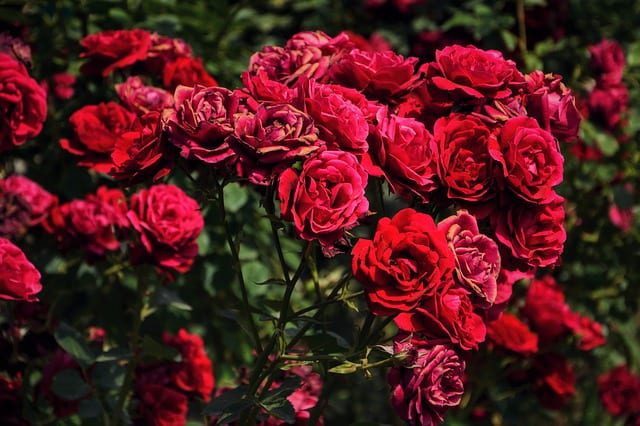 The first time I forgot about the coronavirus, was yesterday.

That was when I got up earlier than usual and did my social-distancing grocery run for milk and fresh meat. I went to Wal Mart instead of Kroger. I cheered to see regular chicken and beef in stock instead of nothing but sausage again. I grabbed a package of toilet paper even though we’re not quite out of toilet paper yet– the clerks were just unpacking a palette, and smiled back at me when I hugged the 9-pack gratefully. I wasn’t even alarmed at the aisles of canned soup and canned vegetables that were picked over.

“Ordinary is just what you’re used to,” said Aunt Lydia in Margaret Atwood’s chilling novel, The Handmaid’s Tale. “This may not seem ordinary to you now, but after a time it will. It will become ordinary.”

It felt ordinary to me, just then.

These days we are supposed to get in and out of the store quickly, but I have to wait for the bus, so I can’t. I took my usual hour. After I filled the cart I lingered in the garden section, which felt like a vacation. There were potted plants for sale already, Rosemary and chives for the garden and succulents for the house. There were sacks of potting soil and rack after rack of seed packets, neatly arranged in alphabetical order.

The hoarders have canned vegetables to last them until July, but here I had fresh vegetables starting in May and they don’t. They will sit in their houses eating limp string beans. They hadn’t even thought to look for food in the garden section.

It was in the garden section, smiling at a whimsical display of potted cacti, that I realized I hadn’t been thinking about coronavirus. I wasn’t afraid to be out of my house. I just felt happy. And then, of course, I shuddered, and wasn’t happy anymore.

I grabbed some packets of seeds to plant at home.

I didn’t garden last year, except for one row of sugar snap peas for Rosie and her neighbor friends to graze on. The year before, I don’t think we grew anything. I have been in such despair, stuck in the rental house like a crawfish in a jar these past few years. I didn’t want to go into my yard at all. I didn’t want to see a violent performance from the next door neighbor who waved a knife at us, or face the neighborhood drifter who stole Rosie’s bike one day only to bring it back the next time he wanted money.

LaBelle is not a kind, a beautiful or a merciful place. I’ve been desperate to leave here. I was finally over my wintertime flare-up and ready to finish my driving lessons at the beginning of March. When they closed the BMV so I couldn’t take the test, I found myself more trapped than ever.

It seems crass to look for silver linings in something as heinous as a pandemic. But I realized it was likely that if I went into my backyard this year, I’d be left alone. In one way I’m more trapped than ever, but in another I’m blissfully free. I can be in my yard.

Rosie and I set to work today.

It was an absolutely beautiful afternoon– warm, sunny. The fat pigeons that nest in our gutters flew low under a sparkling blue sky. Again, I forgot all about the pandemic.

The first time we grew a garden, all those years ago when we moved into this fusty old rental house in terrible LaBelle, Rosie wasn’t very helpful. Now, she’s stronger than I am. She dug part of the garden bed herself, and sprinkled half a bag of organic fertilizer I’d saved. I poked holes and she put in sugar snap peas. Those are her favorite vegetable, if they’re fresh. I’ve also known her to crunch a whole head of broccoli in the time it takes to get her inside from the garden. The broccoli and sugar snap peas at the store taste completely different.

There is a stumpy patch near the end of the yard, where a rose bush grows. It came with the house– I think it was planted decades ago, back when LaBelle people had money for gardens, before this house was a derelict and a drug house. It’s right up against the concrete patio that used to be a shed. In the years we haven’t gardened, Michael has accidentally mowed that rose bush when he goes over the lawn with a weed eater. It’s hard to mow around when it’s only another, thicker, thornier part of the lawn. When it’s allowed to grow big, the rose gets heavy with dark red,  blooms that really smell like roses. Before then, it’s just a thorn bush.

“A rose in a farmer’s field is a weed,” a teacher once told me.

My goal had been to dig all the way up through the stumpy patch to the patio.

Then we heard voices, which was startling on such a quiet afternoon. I looked up to see a group of three teenage boys walking together in our alley.

My instinct was to scream at them that they were standing too close to one another, it wasn’t safe, but all I did was gasp. They didn’t even notice– though one of them did glance at Rosie.

“They’re in trouble,” said the one who glanced, gesturing with his head to our garden. “We’re safe. It only kills old people and, like, little kids.”

Last month they would have said it only killed elderly people.

A teenager died of COVID in California yesterday. Pretty soon, the teenagers of LaBelle will have to think of another reason to believe they are immortal.

The way they talk reminds me of me watching the news, seeing the virus advance, ruthless, first in China so far away it might be an imaginary country in a fairy tale. Then through Asia and into Europe, and then it was here. First two hundred cases across the country and then four hundred, then thousands, tens of thousands, then two hundred deaths, then four hundred deaths, now we’ll likely top a thousand deaths by the end of the day and we’ve nowhere near peaked yet. I’ve watched the virus come closer and closer– first in neighboring states, then only in Cuyahoga county, then in Franklin county and I cried for all the people I left behind in Columbus. Then it was in West Virginia, just to the east of me, and now it’s in the counties bordering mine, and it’s likely that the only reason we don’t have a confirmed case here is that no one here can afford to go to the doctor. But it couldn’t be me, it couldn’t be Michael, it couldn’t be Rosie, not us, Lord. Please, God, not us. Please let us harvest snap peas in May. Please let us harvest broccoli in June. Please, please, let Rosie grow up to be a Kindergarten teacher and send her children to school. But for this family, would you spare the world? But for this garden, would you spare the world?

If I place this seed in the ground as an offering, Lord, will you let me live to harvest it?

And then I realized that I hadn’t been thinking about coronavirus again, not until that flood of panic went through my head all at once.

I had dug all the way up to the rose bush, but I stopped there and weeded around it. We rolled out black weed-control cloth over the garden bed we’d dug, and I left a gap for the rose bush to grow through.

That’s my prayer and my act of faith for the day. Call it superstition if you like.

Blessed are the merciful, for they will be shown mercy.