On the Darkest Holy Thursday 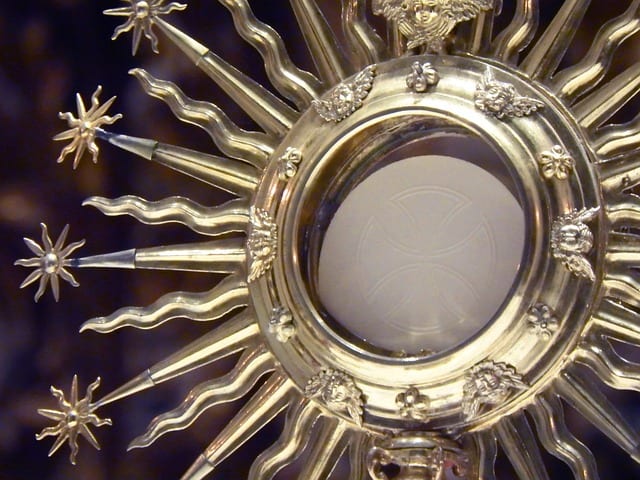 We’ve reached the end of Lent, the beginning of Triduum. Sunday will be Easter.

The world is going to be in darkness for quite a bit longer.

I know of some of them. My friends online are in mourning. Relatives, parents and grandparents, died in the hospital unattended except by those brave doctors and nurses who are doing all that they can– no family or friends because it’s not safe. No funeral afterwards because we don’t dare gather together or even more of us will die, alone, with no funeral, and this will go on for even longer. The only way to limit the deaths is to remain in this dark, inhuman isolation.

I have been without the Eucharist for a month.

It’s not the first time I’ve been that long without it. I’m chronically ill. Sometimes I have perfectly normal functioning for a month at a time. Sometimes I have a flare that last for weeks or months, and then I just can’t get to Mass. I’ve gone as long as six weeks before. It makes the Eucharist more precious to me when I can receive.

The fact is, I often live as if I’m sheltering in place. I regularly go for weeks when I can’t get out of the house at all, or only for a trip to the grocery store or a quick walk so my joints don’t hurt even worse. Partly due to my sickness our income is patchy and we don’t have a car, so I just don’t go places for fun very often. I don’t see friends much at all– most of my friends live several states away, so I content myself with chatting on the internet.

I am used to the life we’ve all been living this Spring. It’s difficult for me, but I know how to do it.

But that doesn’t mean I want everyone else to live this way.

I want other people to have normal lives, as much or more than I want myself to be normal.

On top of the crushing weight of all this death and grief, I am crushed at the thought of a world as lonely as I am.

But let me tell you something that gives me hope.

It’s something to remember on Holy Thursday, the liturgical anniversary of the very first Mass and the institution of the Eucharist, when so many of us can’t receive the Eucharist.

I used to be a Charismatic Catholic– or, rather, I used to be in a group of people who were duped by an evil and manipulative narcissistic religious sister who considered herself a Charismatic Catholic. I don’t blame them for that anymore. For a time, I had the notion that the best thing was a miracle: a moment when God suspends the laws of physics and does something to grab our attention. Statues weeping. Water turning into oil. Images appearing on the sun.  Tongues and prophecies. Signs and wonders. Things going bump.

I have found something much better now.

The best thing there is, is transubstantiation.

Transubstantiation is the opposite of my notion of a miracle. It doesn’t do anything to grab our attention. There’s no appearance of anything out of the ordinary at all. Here is the appearance of bread. Here is the appearance of wine. They used to really be bread and wine but now they aren’t. They are God: God present with us, God touchable, God swallowable, God helpless on a paten or in a ciborium. Everyone who eats and drinks what used to be bread and wine receives the entire God. I sip from the chalice and so do you, but each of us gets all of God. The God Who is everywhere present and filling all things but cannot be contained in the entire universe is in me, and the same God is in you, and then the thing that looks like bread and wine dissolves inside of us and He isn’t there in that particular way any more– only in all the other ways God is always present.

It seems to me that we, as human beings, are also being transubstantiated.

There’s probably a different word for that, that a theologian could tell you. I’m not a theologian. I’m a poet who writes needlessly long and complicated essays about how miserable I am, and for some reason people listen. But I’m told and I believe that the endgame for this whole plan of God’s– creating Creation in the first place, giving Mankind a choice between good and evil, forgiving and saving us when we chose evil, descending to dwell among us and suffer our death and hell, rising from the dead and ascending to the Father, returning in Glory one of these days– this is all so that we can be drawn up into where He is and be one with Him. God became Man so that Man might become God.  That’s one of those terrible, beautiful sayings that will get you accused of blasphemy if you say it to the wrong person, but Saint Athanasius was speaking the truth.

This agonizing journey, this fear, the terrible death, the grief, the tedium, the loneliness, even this separation from the Eucharist, the dreary Easter season devoid of consolation that lies ahead of us– this is a nightmare and I don’t mean to minimize the suffering in any way. It’s real, just like the taste of bread and wine are real tastes when we receive Communion. Our grief is real, just like Christ really felt abandoned on Calvary.

But, because we are one with Christ through baptism and becoming one with Christ as He brings us to where He is, we are not abandoned by the Eucharist. The Eucharist is right here in us. This suffering is brutal, relentless, pointless, it’s not supposed to happen, God doesn’t will it, it’s not a good thing in disguise, it’s not a punishment or intended to teach us an improving moral lesson, it’s just evil. But because we are with Christ, we are receiving Christ constantly, and this suffering is one with the suffering of Gethsemane, of Good Friday and Holy Saturday. Easter will come– not just the liturgical season but our Resurrection when everything is transformed into good. And we will be one, as the Father and He are one.

It’s not that we’re not at Mass. It’s that the Mass that goes on forever all over the world and in Heaven is being offered in us. This, our life of isolation here, is where Christ is offering Himself to the Father for us right now– this is the altar. This is the upper room. This is Calvary.

I won’t be at a Mass tonight, not physically. I’ll be watching it on a livestream. I won’t be adoring Christ in the Eucharist physically present in church afterwards, though I’ll be praying the Rosary and anything else I can think of live on the Steel Magnificat facebook page at nine Eastern if anyone wants to pray with me. And since I can’t be at Mass and receive the Eucharist, I am meditating on the presence of Christ in me– here, in the dark and suffering, unworthy though I am, I am being transformed into Christ.

This long night is another kind of Communion with the blood of Christ.

He hasn’t left us.

He is truly present.

The Eucharist we receive now is painful, but it’s just as real as the kind we’re accustomed to.

Let that be a light on this dark, dark Triduum.

April 9, 2020 A Quick Request for April
Recent Comments
0 | Leave a Comment
"Mary, I would love to have a video chat with you. There is much about ..."
Laurie Harrington In the First Snow
"Very powerful and very moving! Thank you!I suspect that my perspective is somewhat closer to ..."
alwayspuzzled For God So Loved the Formless ..."
"It's easy to get lost from the connectivity that moments like that can give us. ..."
Bemused In the First Snow
"No, the bombing resulting not only in a quick victory but also was dramatically less ..."
Richard Phillips The Death Penalty is Wrong Because ..."
Browse Our Archives
get the latest from
Steel Magnificat
Sign up for our newsletter
POPULAR AT PATHEOS Catholic
1 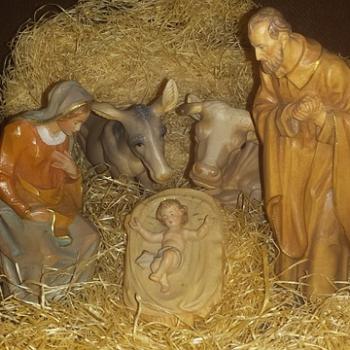