How Do You Get To Gethsemane? 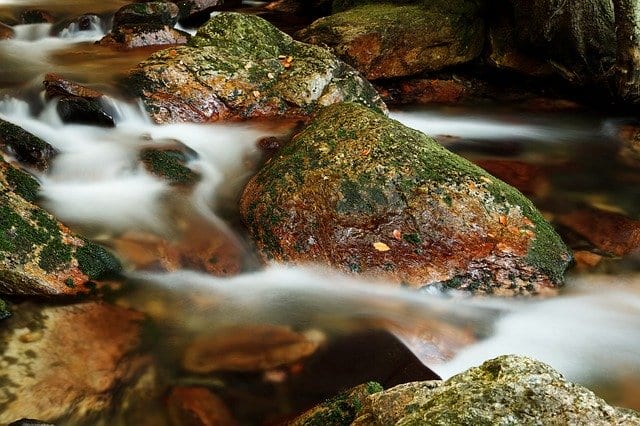 No one said I couldn’t go for a hike.

There’s a lot that’s not allowed right now, for safety reasons. But we’re allowed to go for walks.

There are trails for hiking all around Steubenville, though many of them are officially closed and not maintained by the city. Some are marked with “Keep Out” signs but the one I went on wasn’t. This one led me downhill under budding trees, among violets, may apples, fleabane, and jack-in-the-pulpit, before abruptly ending in a noisy stream bed.

I walked in the stream for awhile, carrying my shoes.

“Vidi aquam egredientem de templo, a latere dextro,” I sang, practicing for Sunday. I saw water flowing from the temple, on the right side, and all to whom that water came have been saved.

Shale is the current bane of the Ohio Valley. It used to be coal, then steel, now shale. Shale can be fracked to make oil somehow. Shale is the reason contractors come here from Texas and Tennessee, claiming they’re going to “create jobs” and then doing the jobs themselves without creating anything but chaos and destruction. Shale will be the death of wildflowers, trees and clear water, if the frackers get their way. Still, shale by itself is pleasant to walk on. It makes a natural smooth stepping stone.

I came to a place where I had to climb over a miniature waterfall, muddying the knees of my good corduroy pants. Then I walked on a pebbly shore, and then I was out of the woods again.

I wonder if the Lord ever walked through a stream bed.

He must have walked all over the place.

The Gospel just says that after singing a hymn, He and the disciples went out to the Mount of Olives, but how do you get to the Mount of Olives? How do you get to Gethsemane? Was there a road the whole way, or did Christ and the disciples have to walk off the path and through a shallow stream? Did they admire the flowers and try to remember their names? Did they have to climb over things and find smooth stepping stones on their way? Did they think about the people who came to their part of the world from somewhere else to make money, and end up sowing chaos?

However they got there, there they were in Gethsemane, and the Lord went off to pray alone.

We are also in Gethsemane.

How did we get to Gethsemane?

We came in the usual way. We were living our day-to-day lives. A catastrophe occurred that was out of our hands. The powerful people who might have mitigated it largely didn’t, and now we are facing death. I don’t know what’s going to happen next. I am confident that it will get much worse before it gets better. We don’t congregate together because we mustn’t right now. It’s dangerous. We pray alone.

How do you pray in Gethsemane?

I think we should pray as the Lord did.

Baptismal Regeneration and Justification (vs. Jason Engwer)
This is my reply to Jason Engwer's article, "Baptismal Justification" (12-20-09), which...
view all Catholic blogs
What Are Your Thoughts?leave a comment
Copyright 2008-2020, Patheos. All rights reserved.