The Deluge and the Garden 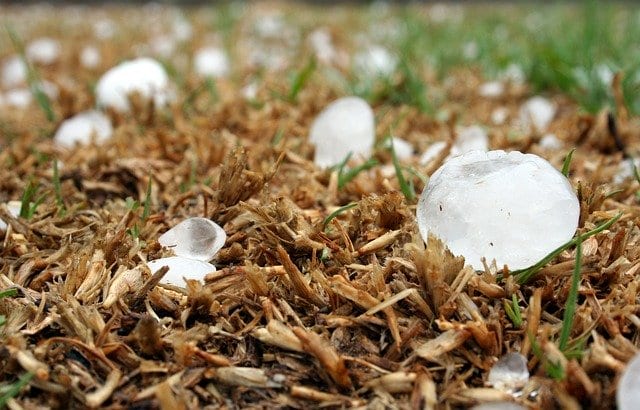 It was a steaming warm, cloyingly humid Saturday afternoon. It started out sunny, but then the clouds rolled in.

I was overheated. I was trying to ignore the fact that I had a cough. It wasn’t a very dry cough, but a cough itself is ominous these days. I was fatigued, but then I always am.

And then my internet router started beeping.

It had never done that before.

I had no idea what was happening, but a moment later I couldn’t hear the internet router beep anymore, because of the crack crack crack of something harder than raindrops hitting the house.

I went out to the porch to watch; I even ventured to the steps for a moment to pick up one perfectly round marble of fresh hail.  Lightning flashed bright over LaBelle– not just a flash in the clouds but a dagger that struck the ground. Then I ducked back in quickly as the hail turned into sheets of rain– and more than sheets. LaBelle was drenched in blankets and quilts of rain, rain so thick it was opaque. I was being soaked just standing in the shelter of the porch, so I came inside– none too soon.

The wind whipped up so the rain was going sideways, and then the hail came back.

I have heard of “golf ball sized hail,” but I’ve never seen any– not in the almost 36 years I’ve lived in Ohio. I’ve seen microbursts, blizzards, flooding, windstorms that snapped trees, but I’ve never seen or imagined anything like this hail. And I could never conceive of how a storm like that can sound. I heard it ring as it hit cars and trucks parked outside; I heard the shattering of glass and the clamor of hard ice against pavement, and the whole world was pandemonium, and a pandemonium of ice swallowed the world.

Rosie came oozing down the stairs covered in her Captain America comforter, looking like an amoeba. She peeked through the door to be sure it was truly gone. Then, she threw off the blanket and ran outside to pick up hailstones– not round balls but clots of hail, conglomerates of white marbles big as my fist. She admired them as they melted away in her hands on the porch.

I checked in to Facebook to tell everybody about the hail. That was when I found out that my router had been trying to tell me about a tornado warning. There aren’t outdoor sirens on top of the fire stations in Steubenville, the way I grew up with in Columbus; your life depends on hearing your internet router and knowing what it means instead. I should have been in the cellar when I was standing dumbstruck on the porch.

It wasn’t that I hadn’t felt that I was in danger, but I hadn’t grasped the full extent.

The next day the rain was over. The next few days were brilliant: it has been sunny, gloriously beautiful.

Now, I am back to only the usual level of danger: a chronically ill woman with a cold and a scratchy throat, in a rickety house, in the worst part of Steubenville, Ohio, during a once-in-a-century pandemic.

We are picking away at the Victory garden, digging up new ground and putting down organic eggshell fertilizer. I’ve planted onions and peas. My living room is full of peat pots, for seedlings to go outside in May.  I’ve covered the ground in shredded cardboard to kill the weeds and covered the cardboard in topsoil.

On one of our digs, Rosie found the remains of a paintbrush she’d stuck deep in the scrubby grass by the patio as a flag, to mark the place where she’d buried a chicken bone. She had heard that if you bury a bone in the ground for a couple of weeks, the worms and microbes in the ground will eat every bit of flesh off of it, leaving it clean and white like the skeletons in museums. So she dug up the grass with her trowel and she planted a bone to dig up later. And then she forgot about it, a year ago.

We dug up that patch of the yard, but the bone was all gone, back to the soil, ashes to ashes.

You have to understand that you have always been dying.

From the moment you were conceived in your mother’s womb, you were doomed. We all were. There’s never been a human who hasn’t been dying. You come out of the womb marked for destruction and then you spend a lifetime returning to the earth.

It’s just that at times like these, we notice.

You have to understand that the only choice that’s up to you, is who you become, in the time that you have.

Nothing else matters very much.