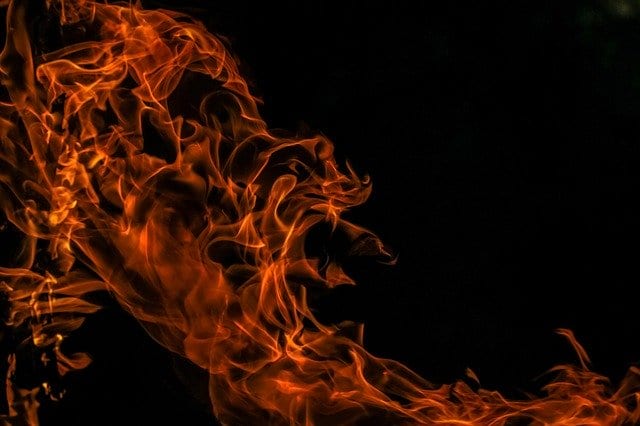 Today is the feast of Saint Joan of Arc, who fought for freedom against the people oppressing her country; she was excommunicated and burned to death by authorities certain they were doing God’s will. Today is the Saturday before Pentecost, when the Holy Ghost descended on the Apostles in tongues of fire. Those apostles went forth into all the world, preaching the Kingdom, and all but one was tortured to death by people concerned with law and order.

The last words of Joan of Arc were “Hold the cross high so I may see it through the flames!”

I am also looking for the Cross, as I watch my country burn.

Earliest this morning, after midnight in the darkest part of the night, I prayed Taize as I watched the riots in Columbus. They didn’t start out as riots, of course, at least not from what I saw. They were peaceful until the police began with the pepper spray, and then they turned violent. That seems to be the pattern all over the country.

I used to live in Columbus. I was born and raised there. That beautiful church where I sung in the choir  is very near where the riots were taking place.  It was built by Irish immigrants when the Irish didn’t count as human beings, and weren’t welcome to worship in Columbus’s other Catholic churches. Then, a generation later, the people who didn’t count as human were the wave of African Americans migrating up from the South, and nobody hated the Irish anymore. When I attended that church, there was always a policeman in uniform acting as security guard outside the front steps, watching for people who shouldn’t be allowed to come in.

They didn’t have riots like this in Columbus, when I was a child; they had a different kind. White college students would burn cars and smash windows in drunken celebration when the Ohio State Buckeyes won a football game. They made me so nervous, I was sometimes to go anywhere near the Ohio State University campus. We used to complain that the hooligans were never arrested or expelled from college.  Now my heart is in my stomach as I watch the police punch and tear gas protesters chanting “I CAN’T BREATHE.”

I am watching demonstrations all over the country, protesting peacefully and not so peacefully, in other people’s hometowns.  I am watching other people, mostly white, invading and appropriating the protests and turning them more violent. Again and again, I’m watching the police escalate to try to provoke more violence however they can. It doesn’t show any sign of stopping.

I saw a police officer on a white horse deliberately run over a Black protester in Houston, carefully avoiding the white man standing next to her.

How long until the police start using real bullets on reporters?

Christ Himself was a dark-skinned man, a despised race in an occupied place, a descendant of enslaved people, tortured to death by the forces who were trying to keep order.

He said that He had come to set the world ablaze, and after He returned to the Father, the Holy Spirit descended on the apostles in tongues of fire.

Drop dew, ye Heavens from above, and let the clouds rain Justice.

Come, Holy Ghost, the Paraclete, the Finger of the Right Hand of God, the Dew, the Fire, the Breath, the Unction. Let the clouds rain Justice.

Come, Spirit of the Peace that surpasses all things. Not peace as the world gives, that sense of peace and quiet and everything returning to normal that happens when an undesirable person’s voice is suffocated. But Peace as the Lord gives, abiding Peace, relentless Peace, terrible Peace, the Peace that reigns when all injustice is weeded out– most of all, the convenient injustice that is the basis of our society.

America was never great. It’s always been this way; it’s just that it’s being recorded now. There is only One Who is Good.

That it ever came to this point, I don’t call a good thing.

That I’m watching the county burn just before Pentecost, on the Feast of Saint Joan of Arc– well, I don’t call it unfitting.

May 28, 2020
If You're Angry About the Looting of a Target Store
Next Post