Under a Charcoal Sky 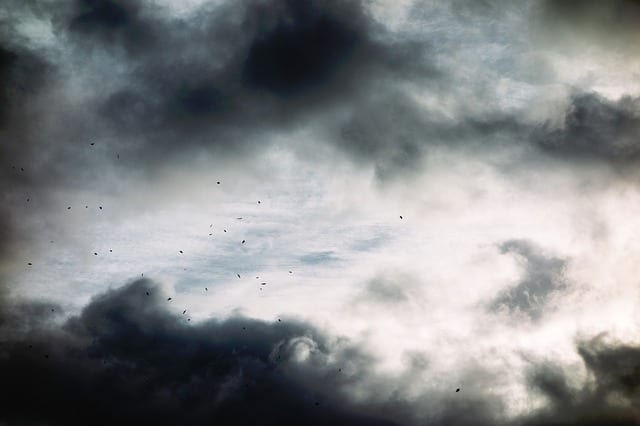 I saw a photo on Twitter today, of migrant workers picking cucumbers with N-95 masks and flashlights in the middle of the day under a bright orange sky.

Someone said it was in the Williamette Valley, Oregon. I’ve never been to that valley. I only know its name, because it was the destination when we played The Oregon Trail in grade school. It was the place with blue skies and bright green grass, where the land was wonderfully fertile and white settlers could be prosperous as soon as they killed off these pesky Native Americans. Of course, it turned out that the Native Americans were the ones who knew how to do a controlled burn once in awhile, so that there wouldn’t be a massive forest fire. And that was with normal patterns of drought, before climate change. Now, the Williamette Valley is an inferno where exploited immigrants pick our salad vegetables by flashlight. All of the West Coast is like that.

I thought about that as I went about my day, writing, homeschooling, watching a liturgy for the Exaltation of the Cross online, taking the bus to buy groceries. I thought about it as a cloudy front rolled in in the evening while I bantered with friends on social media.

Michael was checking and double checking the rain chance, because it looked so cloudy out. I’d forgotten a few things at Kroger, so he was going to walk out and get them. He was confused that the forecast said he wouldn’t need his raincoat but the sky said he would. It looked like it was going to pour.  I was remarking that it was odd– no rain predicted. It had been sunny and pleasantly warm earlier, but now it was overcast and cold.

That was when I happened to see a photo of the satellite map in my news feed.

These weren’t clouds, or at least not clouds of water in the usual way. It was ash.

Eastern Ohio was covered in the dust cloud extending from the wildfires out west.

It is 2,611.2 miles from Steubenville to the Williamette Valley, Oregon. I looked that up. It would take thirty-nine hours to drive there. But Oregon’s ash is in Ohio’s upper atmosphere right now.

I went outside and told Rosie the clouds were not water but dust. I went for a quick walk, just to say I’d been outside under the West Coast’s ecological nightmare. I was in short sleeves because it had been warm earlier today, but it was chilly just then.

When I got back to the yard, Michael came out with me and we watched the sunset that wasn’t.

Michael used to say that the only thing beautiful about Steubenville is the sky. We used to go for walks and admire the dramatic sunsets when we were dating, just over a decade ago. Steubenville’s position on the Ohio river, in the foothills of the Appalachian mountain range, make its weather erratic and irritatingly wet. But the sky is usually so expressive, dotted with great big eccentric cumulus clouds. You can watch fronts come in from the plains to the west of us or the mountains to the southeast. The sky is almost never just one color. When it’s blue, it’s blue with white clouds. When it’s gray, it’s a chiaroscuro of different shades of gray.

This evening, it was only gray.

It was not gray like a Steubenville sky is gray. It was not gray like a photographer’s backdrop is gray, sponge painted to give it some visual interest. It wasn’t even gray like a sidewalk, dotted with little bits of different-colored gravel if you look closely enough. It was only gray, one shade, flat gray like sheet metal, from one end to the other. The air was not heavy with petrichor; it was dry.

The swallows were flying low.

There wasn’t a hint of color as the sun set– no orange, no pink, no yellow, no flash of viridian. I couldn’t even tell where the sun was until it was gone. It went from gray to black. No stars, no moon, just black and cold.

I went inside to put dinner in the oven and help Rosie with the two times table.

When I went out again, it was dark as midnight and the sky had gone from sheet metal to charcoal. That was also wrong. When it’s cloudy here, the street lights and the general pollution make the sky look purple. It’s not supposed to be gray-black. There was a chill in the air. The swallows had been replaced with chirping crickets. I thought I could see Venus, the evening star, shining feebly through the haze, but I couldn’t see any other stars.

I saw a fanciful report on the news earlier today that there might be life on Venus. Everyone is very excited about the slim possibility of organic life forms on another planet. This was not a comforting thought as I squinted at that one dim planet in a sky that had gone from sheet metal gray to charcoal.

I wouldn’t even mind so much if I died myself, as long as the rest of the world got to live.

I went inside and read the news. We’re going to hit the milestone of two hundred thousand Coronavirus deaths in America by tomorrow or the next day. And there are five tropical cyclones in the Atlantic Ocean at once right now.

I grew up in the Charismatic Renewal. We feared the Antichrist and the Three Days of Darkness, the Awakening of Conscience, the Great Chastisement. We speculated about the Fatima prophecies and made reparation by praying the Rosary.  We believed that God sent sickness and bad luck to some victim souls so they could suffer and pay off some of other people’s debt incurred by sin, and avert catastrophes from the rest of the world. We were afraid all the time, but we didn’t fear ecological destruction. The science of ecology was all government propaganda to make people have abortions. We didn’t think very much about the sin of greed that poisons the earth. That sounded too anti-capitalist.

I used to lie awake at night, terrified that God the Father would condemn my unbelieving relatives to eternity in hell, and I begged His clemency. I said He could send me to purgatory until the end of time to pay off some of their debt, if only I didn’t have to go to Heaven when people I loved were in eternal agony. Since then, I’ve grown up. I’ve come to believe in a God of boundless mercy. I see purgatory as a hospital to finish the healing process you began on earth, and not a debtor’s prison. I don’t know if there’s anyone in hell at all, besides the fallen angels. I do not believe the terrible Wedding Feast at Calvary was some simple vicarious atonement, God the Son throwing Himself in front of the abusive tantrum of God the Father. I believe that Christ chose to heal us by taking the whole human experience onto Himself in order that we may be drawn to where He is. He could have done it with a single word, but He did it this way, because He felt this was what we were worth.

I have learned to believe in real things: that ecology is not a conspiracy, that God does not abuse people, that climate change is real, that America is not a kind country but one that massacred millions of indigenous people and has suffered these results. This has not been easy at all.

It was long after I escaped my family and became a pariah to them, that I found out they’d been duped by an abusive religious sister. It wasn’t their madness; they were victims of spiritual abuse as much as I was. I wish I could tell them I understand that now. I wish there was a way that we could heal together. But I’ll never see them again.

I have rejected the false god of vengeance a thousand times since I grew up.

Still, at the moment, for the first time in years, I wanted to pray for that vengeful god to smite me and leave the rest of the earth alone. Pour your wrath out on me, Jesus, and leave the earth alone. No dust cloud, no three days of darkness, no apparitions, no signs or wonders, no spooks or horrors or torment of victim souls. Tear me to shreds, but let everyone else live. Find some corner of purgatory where I can smolder for ten thousand years, but put things back the way that they were. Put the carbon back into the ground. Make the trees grow back. Make the sky a normal gray. Make the Williamette Valley blue and green. Restore life to all those we’ve killed with our greed and make this horror go away.

And then, as I have so many times before, I cast down that idol. I went inside, to live in the real world with the real God, under a charcoal sky.

September 17, 2020 Diocese of Amarillo: Disregard and Pray for Pavone
Recent Comments
0 | Leave a Comment
Browse Our Archives
get the latest from
Steel Magnificat
Sign up for our newsletter
POPULAR AT PATHEOS Catholic
1