Trump Is Counting on Evangelicals in America to Pay Homage With Their Votes November 3, 2018 Susan Wright

The gross, symbiotic relationship that exists between a serial con artist and adulterer, and the evangelical voting bloc in the United States continues to grow and morph into something that only serves to damage the witness of evangelical Christians to the world.

Nothing had changed, in regards to religious rights, mainly because there was never a problem that needed fixing. The First Amendment has that covered.

Well, she’s not locked up and we’ve moved no closer to justice for the Americans killed in that raid on the Benghazi compound in 2012.

OH – and I don’t know anyone that ever stopped saying “Merry Christmas” when they wanted to, for any reason, so Donald Trump did not save Christmas.

To hear Trump talk about it, however, he’s practically the second coming, and evangelicals are fully encouraging it.

CBN allowed David Brody, a bona fide Trump acolyte and devotee, to do a glowing puff piece, as he traveled with the president from campaign rally to campaign rally.

To begin with, the president talked about the fabled “blue wave” that may or may not be coming next week, where the opportunity exists for Congress and/or the Senate to fall into the hands of Democrats.

I’ve been hearing Trump urge supporters at these rallies to get out and vote, because they’re voting for him.

More specifically, he’s hinting that a Democrat majority may push for his impeachment, and he’s scared.

“Well I think the blue wave is dead, frankly. And I think we’re doing very well. It looks like we’re going to win the Senate which is very important,” President Trump said.

Some are predicting a blue House and a red Senate.

Critics accuse President Trump of hostility and incivility, so CBN News asked about what kind of role the president plays and whether he feels a responsibility in this.

“Well I think the media is extremely unfair. It has been from the time I announced and a lot of that has to do with the fact that I’m Republican, I’m conservative, and many other reasons, and probably me too,” he said.

It’s definitely because of who Trump is.

If there’s anything to really hold the media to account for, it is that they treated Trump like he was the heir to the throne, long before the primaries were over.

Rather than ignoring this blithering dolt, as he sought to wreck the process by calling men and women with far more experience, qualifications, and absolutely more class by childish, ignorant names.

Trump in the debates was eye-popping laughable, in that he refused to answer any questions directly. The ones he did, he got wrong. So very wrong.

He was outclassed, outgunned, and still won because he was the train wreck the media could not look away from. The gave him so much free media attention, that everything he is now, they are complicit in foisting on the nation.

He specifically believes the media breeds dissension by unfairly covering events like his trip to the scene of the synagogue shooting.

“We had a great day. It was so respectful of the office of president and if you got home and if you read the New York Times or the Washington Post or if you saw any of the networks, you would say it was violence, it was, it was riots. I mean, it was the most incredible thing I’ve ever seen and everybody that was on that trip agreed with us. It was so wrong what they did. It was so phony,” he said.

Yeah. It wasn’t about you, Mr. Trump.

He also covered the migrant caravan that is being used to pump up the fears of the base.

“Well you know the word ‘racist’ is used about every Republican that’s winning. Any time a Republican is leading they take out the ‘R’ word, the ‘racist’ word. And I’m not anti-immigrant at all. I’m all for people coming into the country legally and people based on merit, but when you see a caravan that’s pouring up to our country with thousands of people…”

“Look, we’re not going to let them come into our country. We have ten and we might even go up to 15,000 soldiers on our border. We are building a wall in its own way. We’re putting up walls and barbed wire and when you look at what we’re doing, they’re just not coming into our country. They might as well go back down. But take a look at the violence that they’ve created down there, that level of, I mean these are not, these are not angels as you would say, these are not angels.”

A wall in its own way?

And he doesn’t know enough about what’s going on in that caravan to make a character judgment on any of them.

As learned in the Joe Arpaio school of tent city building?

Truly, the immigration issue is a delicate one for Christians. We’re called to be kind to the immigrants, the widows and orphans. We can’t be callous to the reasons many risk the trek to the southern border, even if we recognize the wrong with allowing illegal immigration to continue on, unchecked.

And if you think President Trump is concerned that some of his hateful rhetoric towards either the media or the migrant caravan is turning any of his evangelical supporters off, think again. He knows the kind of grip he has on them.

“Well they’re going to show up for me because nobody’s done more for Christians or evangelicals or frankly religion than I have. You’ve seen all the things that we’ve passed including the Johnson Amendment and so many things we’ve nullified. Nobody’s done more than we have. Mexico City, take a look at that. Things that frankly until Ronald Reagan, nobody did anything. So, I know they’re very happy with me. We’ve seen they’re very happy. The question is whether or not they’re going to go out and vote when I’m not running. I have no doubt they’re going to be there in ’20. I hope they’re going to be there now because it’ll be a lot easier if they are, a lot better.”

So, again, let me reiterate:

Donald Trump has done nothing for Christians or evangelicals. For him to say he’s done more for religion than anyone is ridiculous. Who does he think he is?

Don’t answer. I already know who he thinks he is, and he’s not.

So, the Johnson Amendment was not nullified. He passed an executive order telling authorities to look the other way if pastors wanted to use the pulpit to campaign, rather than preach the Word of God. Winning votes for Republicans is more important than winning lost souls for the Kingdom of God, amirite?

The Mexico City policy was rolled back by George W. Bush. Unfortunately, Barack Obama took office and his first act was to reinstate it, in order to further push the abortion agenda of the left, so Trump is lying again, here.

A man who lies with such ease, cares little for the actual truth, is abusive and callous to the downtrodden, is not a good representative to the world for evangelicals, but still, they support him.

I don’t know how this ends, but I suspect that Trump will not be around after 2020. Long after he’s gone, however, his stench will be associated with evangelical Christians and their saltiness will have been thrown into the streets to be trampled underfoot.

Pray for a revival of the Spirit, before it’s too late. 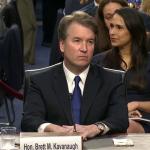 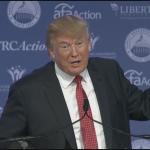 November 5, 2018 Trump-Promoting Billboard Vows to "Make the Gospel Great Again"
Recent Comments
10 Comments | Leave a Comment
Browse Our Archives
get the latest updates from
Susan Wright on the Right
and the Patheos
Politics Red
Channel
POPULAR AT PATHEOS Politics Red
1