Who Is Lobbying Trump to Pardon an Accused War Criminal?

Is this a conflict of interests?

I’m feeling like it is, along with a very big deal.

Some of you may be following the news that President Trump is reportedly considering granting pardons to several members of the military who have been charged with what amounts to war crimes, or at the very least, abuses of their duties.

What could possibly be spurring this on?

For starters, we can assume [rightly] that with an election looming, President Trump feels this will up his cred in the eyes of the military.

He could never be one of them, after all. His life of pampered privilege kept him from safely out of harm’s way when duty called.

Trump is really big on claiming fellowship with, and assuming the honor belonging to groups he has no connection with, whether it be the military or Christianity.

He may have found an easy mark in America’s evangelical community, but stunts like this might not win him the affections of our military, so easily.

Since he put it out there that he was considering pardons for war criminals, some of the feedback from the military has been less than enthusiastic.

What message is he sending?

What these men did was demeaning to the integrity of the armed services. To suggest they walk away from the punishment due does not sit well with those who know and care about honor.

Trump is just throwing things at the wall to see what will stick, and he’s allowing others with special interests in these cases to guide his thinking.

We can safely assume that’s the case, because the president, from everything we know about him, thus far, has no curiosity about anything that doesn’t benefit him directly and in the moment.

Somebody brought these cases before him and told him a pardon would be a good thing for his numbers with the military.

Perhaps one of the most egregious cases is that of Navy SEALS special operations chief Edward Gallagher, arrested and charged last September for a series of disturbing war crimes.

The crimes Gallagher was arrested for include killing innocent Iraqi citizens, such as a young girl who was simply walking with her friends. There was also an old man who became a random target.

Then there was the 15 year old enemy combatant, wounded, and being treated by U.S. medics.

Gallagher allegedly approached the boy as he was being treated for his injuries, took out his knife, and stabbed him to death.

He later bragged about it.

His platoon members were reportedly so concerned that they began taking warning shots whenever they saw civilians approaching, in attempts to scare off these people before Gallagher could take aim.

Seven platoon members eventually went to authorities, and he was arrested, charged with 12 counts, including murder, attempted murder, and the attempted intimidation of troop members who were reporting his crimes.

He faces possible life in prison.

Meanwhile, Fox News personality, Pete Hegseth, has lobbied the president to pardon this man. We all know Trump gets most of his policy info from Fox, so this shouldn’t be a surprise to anyone.

CNN, however, has uncovered another potential source of influence in the Gallagher case: a Trump Organization lawyer, Marc Mukasey.

CNN reported Thursday that Marc Mukasey, an attorney with the Trump administration who was most recently involved in efforts to block House Democrats from accessing the president’s tax returns, is “one of the attorneys on Chief [Edward] Gallagher’s team,” according to a source familiar with Gallagher’s defense.

Mukasey has been working for Gallagher for “two to three months,” according to that source.

Gallagher’s wife confirmed Mukasey’s involvement, but stressed that he was not the main attorney.

That may be the case, but it does pose an interesting dynamic. You have to question just how much influence Mukasey may have with Trump, and if he’s pulling out that card to benefit his other client.

The optics are bad.

The lead defense attorney on the case insists that it’s all just coincidence and that they’re not actively seeking a pardon.

“We have not asked the President to get involved … We haven’t had any communications,” Tim Parlatore said, according to CNN. “If the President chooses to act it will be on his own.”

“The president has the power to pardon anybody either before or after a conviction,” Parlatore reportedly added.

He does, but is it always right?

Gallagher’s trial is scheduled for next week. He has maintained his claims of innocence, suggesting that it was “disgruntled” team members who have brought false charges against him.

Watch the next few days to see what President Trump does. If he pardons this man, questions should be asked and answers sought about just what sort of lobbying went into letting a genuine war criminal go free. 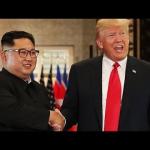 May 27, 2019 Against His Own Countrymen, Trump Continues to Side With Despots
Recent Comments
21 Comments | Leave a Comment
Browse Our Archives
Follow Us!