why I don’t toe the line: pacifism and the hypocrisy of “religious liberty” rhetoric 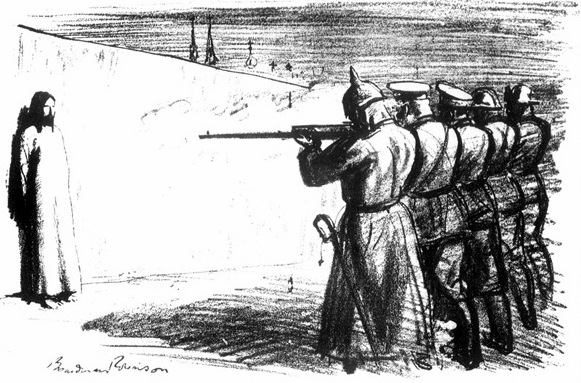 As a religious pacifist, I am consistently oppressed by the government in the use of my taxes specifically for the purpose of furthering continual war; and the US military as said government’s enforcers won’t do a goddamn thing to stop this oppression.

That’s why I will never in a million years buy the rhetoric of “standing up for religious liberty” as that rhetoric is most commonly touted by, say, Fr. Frank Pavone, et al. None of them, to a man, genuinely support *my* religious liberty and freedom of conscience.
I have to live each day knowing that 99% of my fellow American Christians, whether Protestant, Catholic, or Orthodox, would quite readily support subjugating and silencing me and throwing me in prison — putting the government ahead of their own brother in Christ. It happened a century ago during the First World War, after all. (1)
Where the hell was the defense of religious liberty for my Church of Christ forbears who preached — as did Jesus — that we should love our enemies even if it kills us? Why did everyone else think it was OK not only to betray this ethic, but to stand by and allow those who preached it to be imprisoned because it “might hinder military recruitment”? (2)
I have to choose each day not to give up on believing the world makes sense, justice can and will triumph, and that God is actually there. It is an active choice because it requires me to remember at every Mass or Divine Liturgy that even when that priest says that a Christian can have inner peace even when he blows his enemy’s brains out, or that “my country, right or wrong” (3) is the Catholic ethos to war, that this liturgy is valid in sacraments and meaningful in its prayers for peace despite the horrendous shortcomings of priests and bishops who offer not only by their words the bloodless re-presentation of the bloody sacrifice of Cavalry, but by their omission the bloody sacrifice of Catholic and Orthodox souls that they did not warn away from the sin of warfare.
If just wars can meaningfully exist apart from direct revelation by God, what I must ask is when do non-pacifists admit that certain wars are unjust and we must oppose them utterly? Only once in recent memory has a bishop done so when it counts — and he was not a Roman one. (4) Lord Jesus Christ, Son of God, have mercy on me, a sinner.
(1) An account of Mennonite refugees from Germany, who fled the draft there only to be conscripted here, can be found herein. They had it worse than us. https://books.google.com/books?id=F…
(2) While the Jehovah’s Witnesses get a great many things wrong, they suffered persecution for refusing to betray the ethos of Christ while they were thrown under the bus by the theologically orthodox. https://en.wikipedia.org/wiki/Espio…
(3) Cardinal Spellman being the betrayer of the faith who led many souls into mortal sin during the Vietnam era. https://books.google.com/books?id=t…
(4) How I wish more bishops had the courage and discernment of +John Michael Botean of the Romanian Catholic Church! http://www.justpeace.org/botean.htm
image credit: https://upload.wikimedia.org/wikipedia/commons/4/4b/The_Deserter.jpg
Previous Post

November 11, 2016 are you affiliated with an organization that helps women and families directly? the new pro life movement would like to promote it
Recent Comments
0 | Leave a Comment
Browse Our Archives
Follow Us!

Did the Mainstream Media and Bill...
Public Catholic