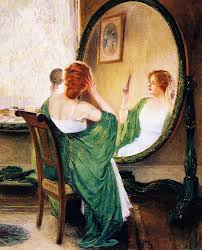 Female beauty: we all want it, right? Women want to be beautiful; men want to be loved by beautiful women. Beauty inspires art, transforms culture. Indeed, if we take Dostoevsky literally, it even saves the world.

Our market seems to support this notion, given the multi-billion dollar industries dedicated to the promotion of female beauty. Pop culture supports it: women in entertainment are expected to be beautiful, as men are not. The interplay between pop culture and market means that beautiful women in entertainment are used as images for selling products that have nothing to do with women, per se, or with beauty. Cars, snacks, beer, medicine – all are marketed via images of gorgeous women. “Sex sells” people say – indicating that in the collective imagination beautiful women are seen not so much as persons but as emblems of sex. As De Beauvoir pointed out, in the collective imagination, the idea of “man” is neutral; “woman” on the other hand, implies “the sex.”

And even in religion, female beauty is considered to be somehow required. As Naomi Wolf writes in The Beauty Myth:

“The skepticism of the modern age evaporates where the subject is women’s beauty. It is still – indeed, more than ever – described not as if it is determined by mortal beings, shaped by politics, history and the marketplace, but as if there is a divine authority who issues deathless scripture about what it is that makes a woman good to look at….A man’s right to confer judgment on any woman’s beauty while remaining himself unjudged is beyond scrutiny because it is thought of as God-given.”

Female beauty is seen as some kind of proof of divine goodness, as a symbol of purity and righteousness, as having spiritual significance – but, of course, at the same time, it is also depicted as potentially dangerous. Beauty, in Christian circles, is often qualified: it has to be “true beauty” (which means: feminine, modest, submissive, obedient). “True beauty” inspires and elevates. Beauty that is “merely external” is not “true beauty.” If a beautiful woman is unfeminine, immodest, domineering, or unruly, her beauty isn’t the real thing. Beauty is associated with certain specifically “feminine” virtues, such as purity, chastity, obedience, and modesty.

We’ve heard it all before. And if you happen to fall into the category of the Truly Beautiful woman – which means: white, small-nosed, slender, but with perky breasts (not too perky, though), smiling, winsome, healthy (but not mannishly muscular), happy in 1950s western gender roles, uninterested in philosophical dispute, delighted to twirl in long, full skirts – you probably nod your head and say: yes, this is my calling. I will be Truly Beautiful and Save the World.

The problem with this elevation of female beauty is manifold. I will touch on only three of the problems with it, here.

First of all, it involves a confusion about ethics. Treating beauty as though it is somehow divinely commanded, and associated with virtuous living, implies that women who aren’t physically attractive have failed to be the sort of things God wants us to be. Of course, one could say, “we aren’t talking about physical beauty; we’re talking about True Beauty.” But that’s an evasion. Of course we are talking about physical beauty. Physical beauty is what the market is pushing, what the songs are celebrating. To pretend otherwise is both disingenuous and aesthetically problematic, because either you are lying, or you are pretending that there isn’t such a thing as physical beauty at all. And that would be a mistake, because when we talk about beauty in painting, architecture, music, design, and the rest, we are talking about something that has physicality, something perceived with the senses. Yes, it may shift in relation to culture and taste; it may be somewhat constructed – but it is physical. When we speak of the aesthetic values of a painting the actual physical properties of the work are relevant. However, aesthetic values are not morally mandated. It’s unavoidable that most of us will want to be beautiful, to some extent, in our lives. But that doesn’t mean we have to be. We’re totally free not to be. We can be physically ugly, and still be resplendent persons. The older we get, as women, the less obsessed we get with physical beauty, anyway: it just doesn’t seem as important as being interesting, as producing great art, as working for justice, as being kind.

Another problem is that this elevation of female beauty is a sort of fetishism, an objectification of the woman in a way that reduces her personhood. It may not be as overtly fetishism as pornography, but it serves a male demand that women present themselves as the right kind of Object, on which the gaze can rest pleasurably without any consequent pangs of guilt. The subtext is: I want to enjoy your beauty without feeling guilty about lust, and instead of dealing with my own inclinations to dehumanize, you just do the work for me.

Third, this view is connected with an approach to ethics that genders virtue. This is a kind of relativism, as though the call to virtue is relative to one’s sexuality. The virtues are not gendered. There is no such thing as masculine/male virtue, or female/feminine virtue. We are all called to be courageous, just, humble, and modest. We’re not called to be more some and less the other, just because of the kind of genitalia we have.

Maybe our word “beauty” is too broad, too ambiguous – rather like our word “love.” It’s true that even in aesthetics, much that we loosely term “beautiful” would be better served by another adjective. It’s also true that the power of eros, at the height of its spiritual perfection, allows us to see a certain kind of beauty of the person, an ontological goodness that radiates and attracts, so that we are drawn towards union with the beloved even if that person doesn’t have physical, aesthetic beauty. Charlotte Bronte’s Jane Eyre presents, wonderfully, the phenomenon of two physically unattractive people falling in love – not only spiritually, with a love of the mind, but with a truly bodily desire for unity.

We’re here at a liminal point, as Christians, because we know the body matters. But it doesn’t always matter in the way the forces of market and power say it does. The role of the Christian imagination – in philosophy and theology, as well as art and literature, and even in fashion – should be to explore the broad range of aesthetic possibilities, ethical obligations, and even sacramental meanings, of bodily being – neither rejecting it as frightening and gross, not embracing wholesale what the fetishized images of the market or the patriarchal tradition tell us it is. 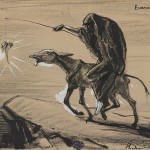 March 22, 2017
The Ever-Moving Goalpost of Eliminating Abortion Supply
Next Post