on the mike pence dining option, and why feminists are expressing criticism

on the mike pence dining option, and why feminists are expressing criticism March 31, 2017 Rebecca Bratten Weiss

In the flurry of debate arising about Mike Pence’s rules for association with women other than his wife, a few interesting topics have emerged that have nothing to do with the Pences or politics or their marriage. Media bias may be an issue in the backlash against Pence, yes, but for many of us who have expressed concerns, it’s not about Pence per se.

True, his rules are not my rules, and if someone told me I needed to adopt them, I would find them both ridiculous and hampering. A working woman sometimes has occasion to meet with men. A woman in academia probably has a number of male friends, too. In fact, I would venture to suggest that mature, developed personhood involves an array of friendships with people of different sexes, ages, and backgrounds. Sometimes you meet a friend for coffee. Sometimes your friend is male. Sometimes you attend a function with alcoholic beverages. There you may converse, debate, banter, and prevaricate, and strangely enough this does not lead to sex, nor even to the desire for sex. The suggestion that such encounters might be occasions for licentiousness introduces an element of impropriety that was never there before the suggestion was made – just as the “modesty police” introduce an element of impropriety by treating female bodies as sexual objects. Everything was correct and human, until the perv – ahem, I mean prude – came along. And yes, sometimes people cheat. But the occasions for this are not going to be eliminated by eradicating any possibility for social one-on-one.

But, again, this isn’t about Pence.

The issue I have is with those such as Matt Walsh and a host of his internet echoes, who have accepted that what Pence expressed as a personal choice should be normative, or even required, for all couples. Here’s why.

Now, several people have said that it is hypocritical to take issue both with Trump’s pussy-grabbing and with Pence’s dining rules – as though it’s a trend to attack right-wingers, whether they’re being predatory or chivalrous.

Several have said that those who criticize Pence are hypocritical in having given Bill Clinton a pass for much more egregious sexism (note: all my Pence-criticizing feminist friends are even harsher on Bill Clinton. It’s great what intellectual independence can do!).

One comment even suggested that women be offered a choice between Pence’s rules for segregation, versus Bill Clinton’s type of one-on-one. As though this were the only reality available for men: avoid women, or coerce them into giving oral pleasure. Of course, for women, if this were our only choice, we’d probably take the Pence Option. But we’re savvy enough to know this dichotomy ridiculous, except for in the case of fellows we’d rather not spend time with, anyway.

Again let me reiterate: I do not have a moral issue with Pence’s rules: his marriage, his business. And yes, it is important for couples to create whatever boundaries are necessary, for the flourishing of their marriage and protection of their family. The parameters of these boundaries will differ from one couple to the next.

But I do think that a culture with accepts Pence’s rules as normative is actually no less sexist than the one that accepts Trump’s locker room talk as natural. In fact, the two cultures are the same. If you think that just grabbing them and kissing them is the natural male way to act, you’re left with either the Trump Option or the Pence Option – Bad Sexist or Good Sexist. Evil Knight who Captures Damsel, or Good Knight that Rescues Her. Sure, the Good Knight is a better character, but speaking as a Damsel, I’d rather get on my own horse and just ride out of the paradigm.

(In the meantime, based on certain comments on the internet, I know now whom NOT to dine with) 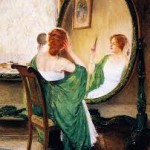 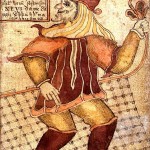