Does Opposing Nazis Make You “Leftist”?

They were marching with swastikas, and shouts of “Sieg Heil.” Some of them loitered, armed, outside the synagogue in Charlottesville. “Jews will not replace us!” they chanted.

We can argue about whether it’s accurate to call them the “far right” or the “alt right” – or whether “conservatism” is in any way to blame for this – but we can no longer pretend that this rising phenomenon is just a handful of fringe loonies, or a few addled college boys infatuated with Milo.

These are Nazis, by their own admission.

Which is why it is so unfathomable that so many pleasant, decent, respectable republicans are framing this as a conflict between two political sides, both equally extreme. Because opposition to Nazis is not extreme; it is just ordinary human decency. One need not be ideologically far-fetched, nor even morally heroic, to note that mass, systemic genocide is evil. When I say that putting Jews into ovens is wrong, this is not some wild leftist claim.

Black Lives Matter is not a hate group, as the KKK is. Black Lives Matter is not dedicated to eradicating white people, and indeed welcomes white allies. Do Black persons occasionally view White persons with suspicion? Yes, sometimes. But, a) this is not the same as racism; and, b) I can understand why. Especially after this past weekend. As a Jewish woman, I see the false equivalencies, the “well, but….”  I see the half-hearted condemnations, and it leaves me wondering whom I could actually trust, were the American Nazis to continue to gain power. At what point might they admit that taking a stand against hatred and genocide is simply our moral obligation as human beings – let alone our religious vocation, as Christians? Or will they continue to justify murder and genocide, because the “other side” pulled down some statues? If I feel angry, I can understand that a Black person, subjected to this every day of her life, might feel considerably moreso. And the anger of the oppressed can not be compared with the violence of the oppressor.

This recasting of the issue as “two sides, both wrong,”  is a way of enabling racists while still appearing to deplore them. Seeking to “find a middle ground” is an excellent option, if what you’re faced with is two kids fighting over a cookie, or a married couple disagreeing on home decor. There is no acceptable middle ground between “supporting genocide” and “opposing genocide:, however.

Why people are comfortable enabling racists is another matter. I suppose it is that, with our cultural heritage of racism, this sin is deeply ingrained in many of us, even when we dimly know that it is wrong. No one wants to be called a racist – that’s good, right? That we know racism is bad?

But, if you want not to be called a racist, certain moral efforts may be required of you. This may involve an examination of conscience. It may involve a recognition of a need to repent and mend your ways.  But some appear to think that saying “I’m not a racist” is enough. As though I could approach dieting by simply saying “I’m not fat.”And if they are called racist, they experience this as somehow as bad as being a victim of racism: there’s your false equivalency, again.

Yes, there are criticisms to be made about the methods of certain activist groups. As a committed (though reluctant) pacifist, I recognize that groups like Antifa and Black Bloc  use methods that perpetuate a dangerous militarism, especially in men. But whatever we say about their means, their end – combatting fascism and racism – are good. And this is not the time to pick them apart as though questionable methods were on a par with genocide.

People lament the smashing of windows as “thuggish.” How prim.

I remember when I was ten or eleven, I found a bunch of old cars that were being saved for parts at the ranch where we lived, and I smashed every single window in every single car, just for the hell of it, to see the smash. That was irresponsible, yes. But you know what I didn’t do? Try to exterminate an entire group of people. 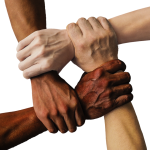 August 29, 2017 Why the Pro-Life Movement Needs to Be Rebuilt
Recent Comments
0 | Leave a Comment
Browse Our Archives
get the latest from
Catholic
Sign up for our newsletter
POPULAR AT PATHEOS Catholic
1