Why the Pro-Life Movement Needs to Be Rebuilt

In recent weeks, I have observed an alarming uptick in tolerance for racism among Catholic pro-lifers.

Of course I was aware, prior to Trump, that fringe elements – usually in Trad circles – have fascist sympathies, but the election of Trump revealed that many, while not sharing these sympathies, obviously consider them not a big deal.

For instance: while I was trying to raise awareness of the Alt Right, last year, I ended up sneaking into a secret group of Catholics bound together, amusingly, by their common complaint at having been blocked by well-known orthodox Roman Catholic blogger Mark Shea. The group was led by an unapologetic Nazi sympathizer, and was peopled largely with individuals whose names would be familiar to anyone who has spend time in combox combat with far-right writers. When the Nazi group leader began harassing me, echoing me, and gathering his minions to do likewise, the others in the group watched in silent complicity. These are people who wax vitriolic over celibate gay Catholics sharing housing, or over “pro-life” meaning anything other than “anti-abortion” – but, it would seem, they are fine with a Jewish woman being bullied and insulted.

This year we have seen actual Nazis and KKK on the streets, and I have waited to hear an outcry from Catholics who love watching The Sound of Music, and posting memes on D-Day. And they have spoken out clearly and strongly – in denunciation of Antifa, the loosely-knit anarchist association dedicated to opposing Fascism.

We have seen our famously pro-life president pardon human rights criminal Joe Arpaio. And most pro-life spokespersons have been silent

Something is very wrong here. This is not the spirit of Christ alive in the Church, and it is not the way to be pro-life.

Matthew Tyson and I have been accused of helping found the New Pro Life Movement as part of some shady Soros plot, or a Podesta plant. Alas, no one is paying us for being whole life.

But I get it. I’m a feminist, still on the young-ish side of middle age, who watches Game of Thrones and makes fun of cupcakes and swears and is openly Leftist (though not liberal) in my sympathies. So maybe you don’t want to listen to me.

But it’s not just we wild leftist whole-lifers who are dismayed by these turns of events. I would like to share with you a statement made by John Cavanaugh-O’Keefe, one of the staunchest and most consistent pro-life leaders I know, who has been actively involved in the movement from its inception:

Since 1972, I have been a pro-life (anti-abortion) activist – sometimes more active than other times, but nonetheless always trying to confront and change a part of my society. And since 1972, I have been aware that the pro-life movement includes some people who are intent on protecting children, and others who are intent on keeping women attached tightly to their “traditional” role in society.

For me, one of the most significant lessons of the Trump election is that the brutal – that is, anti-woman – side of the pro-life coalition now has the upper hand. Anyone who is serious about protecting children will have to fight to re-capture and re-build the pro-life movement.

For anyone willing to engage on this matter, I would point to Charlottesville followed by the Arpaio pardon.

Many pro-lifers voted for Trump in 2016, asserting that they were voting for ABH, anyone but Hillary, and in November, the effective ABH button was labeled “Trump.” To me, it seems obvious that if you vote that way, and prevail, then you have a solemn responsibility to push back hard and visibly against the evils promoted by your candidate. I voted pretty much the same way – ABHUIT, anyone but Hillary unless it’s Trump. That button was labeled Hillary. I was shocked when a nasty dishonest violent racist misogynist fool was elected. But off in one small corner of my mind, I confess, there was a smidgin of relief about one detail: I wouldn’t have to work out the details of voting for a candidate and then opposing the same person promptly. So I can sort of sympathize with the struggle. But.

After the upsurge of the KKK and Nazis, and after their march in Charlottesville ended with a murder, Trump said that some the marchers were good people – no, bad – no, good. And then he launched into a 75 minute rant, including an explanation that someone pressured him to say “Bad KKK, bad Nazi, bad white supremacist,” and so he had obediently checked all those boxes, with beautiful words. I didn’t think it was hard to figure out which view he really held about the Nazi-KKK-white-supremacist coalition. But I admit freely that his words were subject to different interpretations; and I admit that I came to the question about his KKK ties with my mind pretty well set. (“Admit”? Screw that. I ASSERT proudly and firmly that I came to the Charlottesville question with a forthright view.) In any case, in the days after Charlottesville, there was a national argument about whether Trump was leader, or an ally, or an opponent of the white-cyst coalition.

Before that debate ended, Trump pardoned Arpaio. Arpaio was not good at protecting anyone in Maricopa County; he did not catch criminals. He was a fighter, not a sheriff. He was a bigot, who tortured people. He had no concern about the Constitution or the law. He killed people, not with his own hands, but by his brutal orders.

So if Arpaio is a violent criminal, why did Trump cozy up to him? Because Arpaio was an extraordinarily tenacious liar who hated Obama and Mexicans.

So for those who were still wondering, after Charlottesville, whether Trump was a white-supremacist, the answer is clear: Arpaio.

There’s a detail about Arpaio that should not be neglected. He won’t be prosecuted for murder, because causing heat stroke and refusing to treat it is a jailer’s prerogative. So when I say he’s a murderer, I’m not saying that I have the info you need to press charges and get a conviction. Nonetheless, he’s a murderer, a man who killed innocent people. And among his victims, there was at least one unborn child. He refused proper care for a pregnant woman, and the child died.

Will pro-lifers say, finally, that’s enough? Some will; some won’t.

How does a pro-lifer ignore Arpaio’s assault on the unborn? He wasn’t trying to kill the child; it was collateral damage. He was just torturing some Mexican girl, which is the right and proper thing to do. But if you accept that, isn’t every abortion “collateral damage”? People go to abortion clinics to get unpregnant; the child’s death is highly regrettable collateral damage.

There’s no way a serious pro-lifer can let the abortion charge against Arpaio slide.

But many anti-abortionists will let it slide.

For me, one of the most significant lessons of the Trump election is that the brutal – that is, anti-woman – side of the anti-abortion coalition now has the upper hand. Anyone who is serious about protecting children will have to fight to re-capture and re-build the pro-life movement.

Pax et bonum. And God help us all. 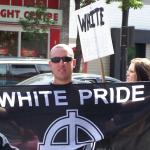