Our Lady of Righteous Anger 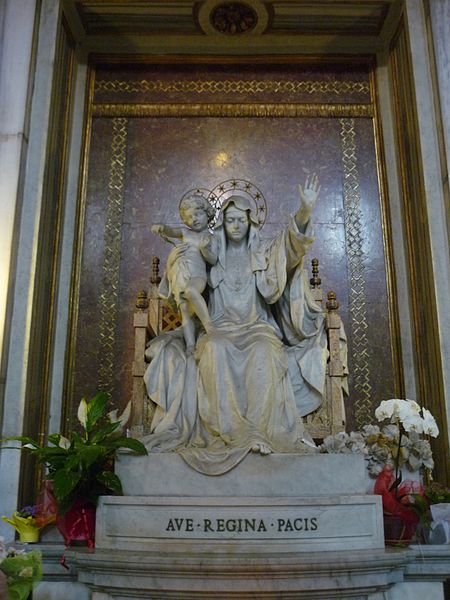 On Facebook yesterday, a number of Catholic friends were sharing around an image of Mary the Mother of Jesus, modeled after the famous Polish icon, Our Lady of Czestochowa. While the art style may not be to everyone’s taste, what I liked about the image was that Mary is presented as strong, cool – possibly staring down an opponent, certainly keeping her thoughts to herself, while holding her baby close. All we see of the face of baby Jesus is that he is looking up at his mother and protector. It’s an expression I wish I could emulate, any time I feel I need to take a stand to protect my family. And insofar as I have a devotion to Mary as Mother, there is reassurance in knowing that she might be facing down my enemies, too.

Mary of Nazareth bore her child into uncertain political and economic circumstances, a poor young woman in a marginalized group oppressed by Imperial powers. That she had to travel long miles while pregnant to register for Augustus’ census is a reminder of the cruelty and heartlessness of such imperial regimes, the disdain for the poor, for mothers and children. The indifference to families unless they are “good Roman families” such as Augustus liked to praise.

She bore her child in a stable, and shortly after had to flee as a refugee from state-sanctioned violence, into a foreign land. She may have saved her child, but what about all the other babies who were killed? This might be one of the things Mary pondered in her heart: why the others couldn’t have been saved. Why she was singled out. What would it feel like, returning to Nazareth and raising a child among women whose sons of the same age had been slaughtered?

It makes sense to portray Mary, at this point in her young life, as angry or defensive. If Jesus could fly into a rage and kick over tables because of economic injustice, why shouldn’t his mother be able to rage against the injustice of a violent regime? Maybe it was a family trait.

But the commentary on this image, mostly from males of a more conservative background, was hugely negative. She doesn’t look meek was the most common response. Or, she doesn’t look humble, she doesn’t look loving. Even: her neckline is immodest. Or, worst of all, she looks like a whore.

Forget about the fact that we have images of Jesus in which he is more like a judgmental Apollo than gentle Messiah. Why is it acceptable to portray different facets of Jesus, but not of Mary?  If Mary is indeed supposed to be “queen of heaven” and the “woman clothed with the sun” who strikes at the serpent, we should see her fierce side, too. She herself sang the revolutionary Magnificat, rejoicing in the casting down of the mighty from their thrones.

The men who object to Mary’s representation as other than the meek, pink-and-white maiden of countless kitschy holy cards seem to be objecting not out of an adherence to Biblical accuracy or artistic tradition. They’re objecting because this is not “their” Mary, the Mary they are willing to venerate. Theirs is an idealized image of the feminine, not even a real woman anymore, but an airy Platonic ideal. Pure, meek, humble. Giving birth to her baby through her ear. Usually silent, unless she says “obey him” – or appears to chastise children about immodest clothing, or not praying enough.

But Mary was not an ideal. She is portrayed in Scripture as a real woman, and one with quite a bit to say, in the few scenes where we see her. She questions an angel, sings revolutionary hymns, sets off on journeys alone, even chastises her son when he slips away from them. If, as the teaching says, she was devoid of sin, being devoid of sin does not mean being confined to just a few virtues, the ones that men have deemed “feminine.” And obedience to God does not mean obedience to men, or to the laws of men. Usually, in the lives of memorable women, it means quite the reverse. And they suffer for it. They don’t emerge looking pink and docile, until after those who rewrite their stories have rendered them fit for a holy card.

Back in 2016, I wrote about the fact that, whenever we object to sexism in the church, someone is sure to remind us that “we have Mary. So what are you complaining about?” We’ve elevated a woman as queen of heaven; a woman was chosen to bear God in the world – so, move on, no sexism here!

Some of the views I expressed in that earlier piece have changed since then, but I still stand by this assertion: that until women are the ones leading the conversation about sex, gender, and equality in the church, we don’t “have” Mary. Men do. Or, rather, they have an idealized, fetishized image of her, one they can comfortably put on pedestals – or even fantasize about suckling from – without feeling guilt, or feeling obligated to give a space to real, living, inferior women at all. They’ve parceled off the virtues, designating any that might be associated with obedience of subordination as “feminine” and assigning those to the mother of God.

In this cultural context, seeing Mary as representing emotions or virtues that have been reserved for select males – white males, the ones who call the shots – is an affront to their authority, specifically their authority to define and limit women. To tell us how we must dress, lest we lead them astray. To tell us what to think, since they are the ones attuned to the voice of God. To tell us how to use our bodies. We’re allowed to stand very, very still on pedestals or in holy cards, and only speak when echoing.

If Mary looks angry in the painting, she has every right to be. Look at what she lived through. Look at what Christians have done in her son’s name – and what men have done with her, too, turning her into a weapon to be used against her daughters.

Here at the beginning of 2018, when a megalomaniacal demagogue – elected with the wild approval of right-wing American “family value” Christians – is tweeting nuclear violence at another megalomaniac on the other side of the globe, I fear for my children, and the world they will have to navigate. Looking at the face of a mother who is also a protector is encouraging. Okay, I say to her. You’re with me. We’re in this together. 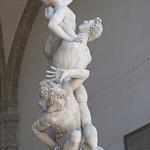