Am I a Racist? An Examination of Conscience

Am I a Racist? An Examination of Conscience January 15, 2018 Rebecca Bratten Weiss 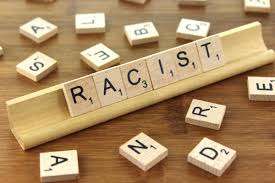 I am writing this for all of you other white folks who reside where I once was: in the “I’m not racist” zone.

The thing about racism is that for the most part, we recognize theoretically that it’s a bad thing. And as long as we imagine that it’s confined to wild-eyed hicks in white robes burning crosses, or robotic Nazis marching in the streets of some other city, far away and long ago, it’s easy to disavow it.

I’m not a Nazi or a KKK member; I don’t think black people should be enslaved, or that Jews should be exterminated. Ergo, I’m not racist. And it’s mean for you to call me racist.

Well, maybe it’s not helpful to call you a racist, if eradicating racism is one’s long-term goal. But toughen up a minute and listen: the reality is, not enslaving black people or putting Jews in ovens is an extremely low bar. It’s like the abusive husband who says “well, I don’t beat her.” Or the homophobe who says “hey, at least I don’t throw gay guys out of windows.”

You might not be a hardcore, flag-waving racist. But because racism is a sin, one can harbor it in one’s heart even if one doesn’t proudly claim it. I am not proud of being envious or slothful, but that doesn’t mean I’m not envious or slothful. Examining one’s conscience means admitting, there are evils lurking in one’s soul of which one would rather not speak.

This is an examination of conscience for myself, and for other white people who don’t want to be racist, who don’t like being called racist – but who have been bought up within a civilization founded on racist presuppositions, both explicitly and implicitly – who have achieved relative material comfort in an economy that was built on colonialism and dictates of ethnic and cultural supremacy – who have been educated to embrace narratives of white saviorhood according to which the injustices of racism are past, and were eradicated by far-thinking white heroes.

I’m not calling you out, by the way. I’m calling us out. This is our collective guilt. Mine, too. And here are some of the ways we mire ourselves more deeply in it.

January 8, 2018
Dr. Estrangedlove, or How I Learned to Stop Worrying and Embrace My Inner Feminist
Next Post

January 17, 2018 The Story of the "Worst Date Ever" Was All Too Familiar
Recent Comments
0 | Leave a Comment
Browse Our Archives
get the latest from
Catholic
Sign up for our newsletter
POPULAR AT PATHEOS Catholic
1