The Story of the “Worst Date Ever” Was All Too Familiar 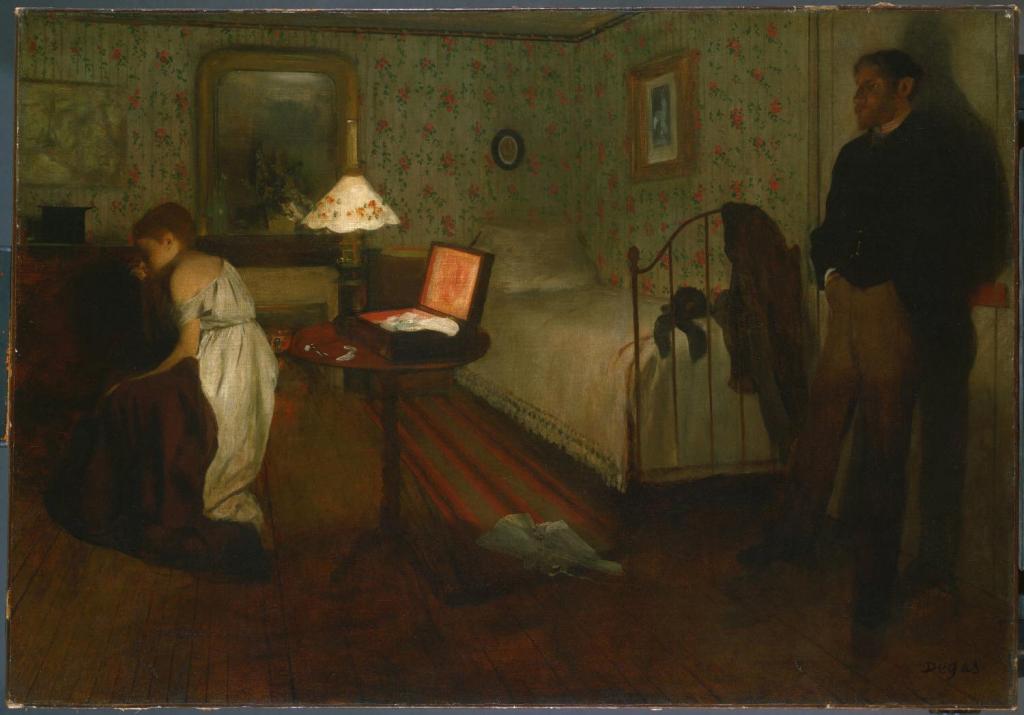 When I read the account in Babe about an anonymous woman’s unpleasant date with actor / comedian Aziz Ansari, I was grossed out, but not shocked.

It’s not shocking that an actor known for playing “woke” roles would turn out to be a douchebag because, well, acting is acting. I understand that it’s easy to forget this, with the way a media persona can eclipse the person generating it – but when you stop and think about it, of course there’s no reason why a man would have any remote resemblance to the character he plays. “I’m not a doctor, but I play one on TV,” is a joke for a reason.

But the other reason it wasn’t shocking? At this point, for the average woman who has spent time trying to navigate the dating scene, creepy dates with predatory gropers feel like just the tip of the rape-culture iceberg.

It reminded me of Charles.

It was quite a few years ago, when I had taken my first “real” job out of college, which meant moving to a city where I knew no one. I was in a psychologically unstable condition, I realize now, due to the fact that I had just extricated myself from a painful romantic relationship which, while it had not involved sex, had certainly involved heartbreak. I was living in isolation, and questioning my faith a good bit, too.

So when I got an email from Charles (name has been changed) from my college crowd, telling me he was on a business trip to the city I was living in, I was excited to have a chance to go out with someone I knew.

And not just anyone. Charles was recognized as the Most Eligible Bachelor in our program: handsome, tall, well-dressed, successful. But he was also known to have ridiculously high standards, and my friends and I used to joke about his uptight adherence to extremely traditional gender roles. He was not the kind of man likely to be interested in an opinionated, argumentative, feminist oddball like myself.

So I figured Charles just wanted to hang out. We drank a bit at one pub, then moved on elsewhere. I don’t remember what we discussed. Gossip? Books? Like I said, I was drinking a lot back then, and conversing was never hard for me. At one point I did begin to wonder. Was he interested in me? Is that why he kept buying me drinks?

I’d lost a lot of weight, in the year preceding, and re-vamped my look, so for the first time in years I felt like a fashion plate, not a stodgy geek. And the thing is, when you’ve been a stodgy geek for many years, it’s really hard not to be flattered by the attention of a handsome, popular man. Even when you disapprove of his politics.

So when Charles told me I had drunk too much to drive home safely, and should instead come back to his hotel, I was flattered. Did I hope “something” would happen? I admit, yes, I did. I was hoping for a little kissing. Snogging, as they call it. Just to make me feel better about the whole heartbreak romance I was recovering from. Just to know a man might find me attractive, after all. I may have vaguely considered emailing my ex later. Had drinks with Charles, I could tell him. Followed by a nice make-out session. Yeah.

And I knew Charles was a gentleman. It was kind of his thing. So I didn’t think there was anything especially problematic about sobering up in his hotel room.

Once we got there, he lay down on one of the beds, so I lay down on the other. “You should come over here,” he said. I did as I was told (patriarchy runs deep), and then things progressed quickly. First we were kissing, then making out, then he was pulling my clothes off, then he was trying to have sex with me.

I knew I was fertile, and that sex that night would probably make me pregnant. Also, I was not at that time very sexually experienced.

So I said no. I said no repeatedly, in spite of his pleading and insistence, and I also pushed him away. No one had ever told me “it’s okay to say no,” but I was terrified of being pregnant, especially at my new job, which was at a Catholic organization, and a pretty conservative one, too.

Then he insisted that I perform oral sex on him. I was tired of saying no, at that point. And it was too easy to fall back on the idea that he was getting “carried away” because he was just that attracted to me.

I had another narrative to choose from: that he was taking advantage of me because I was drunk, because I was there, because I wasn’t the “good girl” type he’d want to date and marry. But I didn’t want to accept that narrative. It would have just added to the humiliation.

Afterwards, I realized it was very late, and if I was going to clean up, have coffee, and get to work in the morning, I would need to leave. As I dressed, he lay in bed laughing at me, because it was so funny to him that I would have to arrive on the job hung over after such a crazy night. He didn’t offer to drive me home, or tell me to let him know I got in safely, or promise to call.

I laughed along. My thing had always been, you have to be tough. You have to have a sense of humor. Men will admire you more, if you take things in stride. You’ll admire yourself more. Don’t be a victim.

To add to the humiliation of it all, one more unpleasant detail: the forced activity had left my lips very chapped, so that one side of my mouth was swelling and blistering, by the time I got to work the next day. In my mind I prepared a story, involving a girl’s overnight, and a pillow fight, even though none of my women friends lived nearby. Later, looking back, I can’t believe I came up with such a ridiculous story, but that’s how hazy my mind was, after no sleep and a lot of alcohol. And head-games.

A lot of people will read this, I’m sure, and think I was an idiot to drink that much. They’ll think I sent him a clear message when I agreed to return to his hotel with him. Women are supposed to know how to protect themselves. And it’s not like I was some wide-eyed teen.

Well, I did know how to protect myself. I knew to be cautious in bad neighborhoods, and around sketchy guys. But I’d grown up with this belief that you protect yourself from the “bad guys,” and if you’re lucky one of the “good guys” will come to your aid.

No, he didn’t rape me. I’ve heard too many stories about really horrifying violations, and my story is not on a par with those. But he treated me as an object, something with no value, to be used and discarded and mocked. And he did so from his full height of white male educated gentlemanly privilege.

Afterwards, I told no one among our mutual friends. Instinctively I knew that they would not blame him, but they would think of me as easy, a slut, pathetic. Or, maybe, they wouldn’t even believe me, since everyone knew how upright Charles was. Such a great guy. And deep down, in some sick way, I felt obligated to protect his reputation. I must have picked up the idea, somewhere along the way, that it’s a woman’s job to protect a man’s honor, even though people like Charles tend to spout the reverse. I wonder how many women have kept their mouths shut, over the years, because at the end of the day we all know it’s really a man’s honor that matters to our society.

Was Charles a monster? A predator?

No. He was just a normal guy. That’s the scary thing about it. Both of us were acting according to the unwritten script the culture gave us. I’m not saying it’s natural for women to be prey and men to be predators. I don’t think that’s true at all. Men can and do get held to a higher standard…sometimes. But what “rape culture” means is that male entitlement to sex is a facet on every level of society. Men are trained to expect it, and women are trained to let ourselves be used.

What I want to say, I think, is that in cases like this it’s not really helpful to shame the male perpetrator. Not because I still think male honor is to be protected at all costs. Not because I think the shame to a man is more important than the violation of a woman. I just want to think about what might best help, and I think part of this means teaching men to do better.

We’re looking at a problem that isn’t confined to a few individuals. It’s structural. That’s why so many men end up disappointing us women, when it comes to our need for allies. They’ve been brought up to do so. All the usual excuses are at their fingertips: she asked for it, she led him on, it’s so hard to tell what women are thinking, it’s hard for a man to go without sex, men are more passionate, women are so emotional, why didn’t she just leave…etc. And even the men who know better than to say these things often tend to express more worry about the damage to a man’s career, when they get “outed” like Ansari did, then about the hundreds and hundreds of women who are used and humiliated, and keep quiet out of fear.

Predatory behavior is normal in dating culture because feminism hasn’t really sunk in as much as it should. We had the sexual revolution, and young people started thinking about sex as something one could enjoy without shame. Body autonomy became important. But within that shift, men still held the power, and most of the old prejudices didn’t go away. The violations that used to be legal within marriage just became part of the game, outside marriage.

I don’t know how to fix this, but I do know that going back to the old-world “gentleman’s honor” approach of someone like Charles won’t help. Because while he was the first “nice man” to take advantage of me and treat me as a sexual object, he wasn’t the last. And prudery won’t solve the problem, either. Look at the Victorian era.

*author’s name has been changed to protect her anonymity

January 15, 2018
Am I a Racist? An Examination of Conscience
Next Post