My Statement on the 2018 March for Life 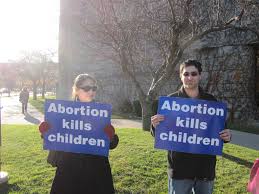 The first time I attended the March for Life, it was at the height of my youthful religious fervor, and I went in the sincere belief that I was taking a strong stand in defense of life, against a secular culture that degraded and reviled it. My moral duty was to be a voice for the voiceless, to be a visible face for the invisible.

Even then, I was surprised to find that the event seemed largely to be a platform for old white Republican male politicians to say their pieces. When Jesse Helms started pontificating, I thought “this has nothing to do with life or justice,” and left, to go to a museum.

“This has nothing to do with life or justice” is pretty much my feeling about the entire mainstream pro-life movement, including the March, now.

Yes, I do have incredible admiration for the many whole-life advocates I know who are attending the March for Life, the ones who take a stand within the context of opposing all threats to life, and especially those who attend both this and the Women’s March – as I intended to do last year, as a representative of consistent-life feminism. Incidentally, I was harassed and attacked by vocal anti-abortion writers at my former place of employment, for my intention to join the Women’s March –  but none of my pro-choice feminist acquaintances attacked me for wanting to march for life.

I find that, today, my place as an advocate for life is no longer with this movement. I do not think that it is a movement for life. The long-time association with the Republican party was always a problem, but now that the GOP has added a Hugh Hefner approach to women to its Ayn Randian economics, it’s concocted a recipe for driving the abortion rates as high as possible. Or for driving women underground, should the present regime somehow succeed in making abortion illegal (it won’t, by the way – Trump does not give one teensy damn about life, born or unborn – but even if they did, I still wouldn’t support them). And now that significant anti-abortion organizations such as Students for Life and Priests for Life have wholeheartedly embraced Trump as their leader, this is not a movement I can support.

The reality is that the injustice done to the unborn does not happen in a moral or economic vacuum; it happens in the context of pre-existent injustices done to women. Women don’t enjoy abortion or think it’s a great thing. Women who have abortions do not hate babies. Many have babies already. They are not choosing abortion because of the hardness of their hearts, or because they’re opting for violence over peace.

A common mantra among pro-lifers is that “abortion hurts women.” Ergo, we should keep women from accessing abortions, since abortions hurt both them and their babies – right? Well, sort of. It’s true that abortion can be physically and psychologically harmful to a woman. But what the pro-life movement fails to note is that in many cases, NOT choosing abortion will hurt women more. They’ll be kicked out of homes and schools, fired from their jobs, shunned by their communities. Lacking medical coverage, they will sink into crushing debt. Lacking funds, they can’t take time off work in the event of a high-risk pregnancy. Infant and maternal mortality rates are an issue here. Often, they can barely even feed the children they have. They may be stuck in abusive marriages, and be afraid to bring a baby into a violent home.

Sometimes, they may even die.

It’s not enough to tell these women, “be strong, you can do it.” We have to help them do it. And that doesn’t just mean giving them diapers or coupons for fomula. That means doing everything in our power to get them consistent, sustainable access to medical care, maternal leave, safe homes, childcare, and financial assistance. Most crisis pregnancy centers depend on government programs, also, so anyone who’s voting to defund assistance programs is in fact undercutting the work of crisis pregnancy centers, or making what they do empty and irrelevant. A few packages of diapers here or there won’t make up for this.

I don’t care whether it’s government, church, or private programs; whatever powers exist, whatever structures are in place, those are the ones that need to be used. In the Middle Ages it was the Church, but no longer, unfortunately. Nor are private enterprises extensive or reliable. Go ahead and try to change that, if you don’t like government involvement – but, in the meantime, government programs are what we have; this is the structure that is in place that works, and if you try to dismantle it for the sake of some high-minded libertarian ideology, you are attacking life.

Aside from this, there is the fact that taking a public stand against abortion while allying oneself with the Trump Republicans sends a terrible message to every single vulnerable woman watching. It says, “we don’t actually care about women.” Opposition to abortion is now officially tethered to misogyny.

It also says, “we don’t care about nuclear war, the plight of immigrants, the environment, the poor, victims of gun violence, or the disabled.” Opposition to abortion is now tethered to a host of anti-life creeds.

Why would anyone trust a group making a statement like that? Why would their view on life ethics be considered admirable?

When Matthew Tyson and I founded the New Pro Life Movement well over a year ago, it was as a response to Trump being chosen as the Republican nominee. Since then, I have encountered more and more thoughtful, ethical pro-choice advocates who sincerely believe that we need to have fewer abortions, and that women need more options – but are afraid of what a regime like this might put in place, when they get their hands on existing abortion laws. Do we want women imprisoned for miscarriages? Absolutely not! No true pro-lifer wants this. And yet there are anti-abortion activists even now saying women should be punished for having abortions. It’s almost as though they’ve gotten so worked up about defeating pro-choicers, they no longer care about actually protecting life.

We need a movement that seeks to protect all life, but also recognizes the importance of a woman’s bodily autonomy. A woman’s right to choose may not be boundless, but it is real. It is wrong to treat women as though we have no claims on our own bodies. As though assault doesn’t matter. As though denigration of women were simply a failure of style.

How do we balance both these ethical beliefs? It’s not easy. But we do believe that by building bridges with those who advance policies that make for a genuinely pro-life culture, we can move in the right direction. This includes the many wonderful consistent-life activists out there; it includes the missionaries, the health care workers, the homeless shelters, the Catholic Worker houses – and it also includes many responsible and ethical pro-choice feminists and political leaders.

Unfortunately, at this point, the leaders of the anti-abortion movement – the Donald Trumps, Paul Ryans, and Fr. Pavones of this world – are not the ones advancing policies with which I can, in good conscience, ally myself.

Last year, New Pro Life affiliate H. Lillian Vogl allowed me to publish her statement on why she does not attend the March. I will close with her words:

January 17, 2018
The Story of the "Worst Date Ever" Was All Too Familiar
Next Post