No, Flannery O’Connor Has Not Been Canceled

No, Flannery O’Connor Has Not Been Canceled September 17, 2020 Rebecca Bratten Weiss 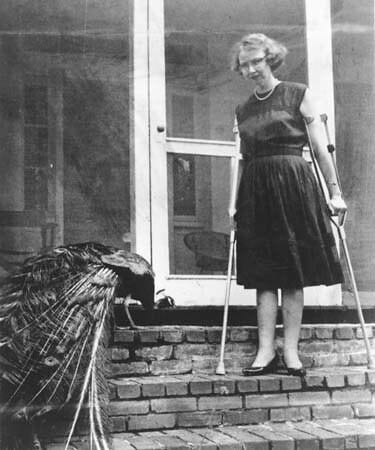 Angela Alaimo O’Donnell, Fordham professor and author of four books on Flannery O’Connor, is better equipped than I am to comment on either the scope or the detail of the acclaimed author’s work. I have taught O’Connor in university classes, but I am no expert. On issues of criticism I will defer to O’Donnell’s far more extensive scholarship.

Nevertheless, I do not agree with O’Donnell that O’Connor has been “canceled,” as she claimed in a recent article for Commonweal.

The context is this. As O’Donnell writes:

A week after the decision by Loyola University Maryland to remove Flannery O’Connor’s name from one of its buildings, the cherry-pickers arrived on the school’s bucolic campus in northeast Baltimore and, letter by letter, the name of one of America’s most iconic Catholic writers disappeared from the dormitory that had been known for more than a decade as Flannery O’Connor Hall.

The unnaming was anticlimactic. The campus is empty, not only because it is high summer, but also because of COVID-19. As a result, there were few witnesses. When students arrive back on campus, whenever that might be, few are likely to notice the change, because these days so few undergraduates are devotees of literature. Most are probably unaware of who Flannery O’Connor was and of the books she wrote. She meant little to them before, and will mean less than little after this.

But to a great many people, Flannery O’Connor means a great deal. This has never been more evident to me than now. In the wake of the public statement issued by the university’s president, Rev. Brian Linnane, SJ, explaining that O’Connor’s name would be removed because she does not “reflect Loyola’s Jesuit values,” hundreds of writers, scholars, readers, and admirers of O’Connor’s work have expressed their shock and sorrow to see her repudiated by the university. Many have posed the question, in essays, in emails, and in social-media posts: How is it possible that O’Connor, a devout Catholic who embraced her vocation as a Catholic as passionately as she embraced her vocation as a writer, could be ‘canceled’ by a Catholic university, and, effectively, her own Church?

Incidentally, the university is renaming the dormitory after Sister Thea Bowman, a granddaughter of slaves under consideration for canonization.

The catalyst was a piece in the New Yorker by Catholic critic Paul Elie, entitled “How Racist Was Flannery O’Connor?” Elie made waves with his piece in two distinct directions: first, by opening a door to the unpleasant reality of just how much racial prejudice the beloved Southern writer harbored; second, by acting as though he was the first to open this door–as though scholars and instructors hadn’t already been grappling with this reality for years.

Elie views O’Donnell’s scholarship on O’Connor as an attempt to exonerate the author by situating her in her historical context. Yet at the same time he quotes her as writing that “O’Connor understood evil in the form of racism from the inside, as one who has practiced it.” What Elie sees in O’Connor’s work is an unconscionable level of racial bias; what O’Donnell sees is a writer who is conscious of her own biases and working through them.

Yet she appears to have worked through them only to a point. We have from O’Connor such blatant statements of prejudice as this:

“You know, I’m an integrationist by principle & a segregationist by taste anyway. I don’t like negroes. They all give me a pain and the more of them I see, the less and less I like them. Particularly the new kind.”

What strikes me about this statement is not only the blatant, overt, unapologetic racism but the casual assumption that her own feelings, her own likes and dislikes, are somehow more important and objective than the rights of other humans. This is exactly the kind of thoughtless, narcissistic relativism one would expect O’Connor to lampoon in her works. O’Connor thoughtlessly wallowing in her own petty racism reads like a caricature of an O’Connor character.

And it is insufficient to say that this prejudice simply marks her as a creature of her time. Many others at her time were actively working to oppose this kind of prejudice. That’s why there was a Civil Rights movement. White Americans as well as Black Americans were involved. But even if only Black citizens had been engaged in fomenting for civil rights, that does not make the assumption “everyone thought that, then,” acceptable. Such statements erase the reality of all the Black people who certainly did not think like that. Such statements presume “everyone” to mean “everyone white.”

How racist was Flannery O’Connor? I think both Elie and O’Donnell are correct.

I believe that she had some consciousness of the way in which her white supremacist culture had shaped her, and was actively trying to grapple with this in herself. The fact that she identified herself with the racist and bigoted character of Mrs. Turpin in her short story “Revelation” is significant. And I think that she grappled with it not only on a personal moral level but on a spiritual and religious level. That is significant, especially when we consider the truth that racism is our nation’s “original sin.”

Yet I also think O’Connor was far more racist, and far more unaware of her racism, than her devoted followers would have us believe. I am not impressed with her level of grappling, especially given that she was supposedly so eager to be counter-cultural on other matters. Maybe she grappled better than other Catholics in her circle, yet at that time there were many voices speaking out prophetically, on racial matters, and it seems she opted to ignore them. Her unwillingness to learn from Black writers and activists is tiresomely typical polite white supremacy

The teachers with whom I studied O’Connor, many years ago, were especially enamored of her idea that grace comes violently. I am not sure, in retrospect, how much fetishism was at play there, how much religious sadism, as these tweed-clad and silver-haired academics delectated over the prospect of grace descending violently – on someone else. Many of these teachers were also, I realize now, deeply racist. I didn’t notice it at the time because we all were.

O’Connor depicted a world in which those who are most spiritually self-satisfied were most likely to receive an apocalyptic come-uppance. It is most overt in “Revelation”: the central character has a literal vision which literally depicts the Gospel teaching that “the last shall be first, and the first shall be last.” In the procession into Heaven, in the afterlife, the poor come first – the Black come first – the lower class come first – and the Mrs. Turpin’s of the world, the righteous, the upright, the respectable, come straggling in last.

I think many of O’Connor’s fans can handle the vision of redemption that she presents because it happens later, over there, in the afterlife. So long as they are able to carry on as kings and queens in their tiny kingdoms on earth, what happens in the kingdom of heaven can wait. But when justice is done here and now, this becomes far more unsettling for them. When racial justice and movements for social equality unfold right beneath their noses, the violence is no longer titillating. It is no longer enclosed within a book or infinitely deferred. It is no longer safe.

The reckoning that we are facing, as white people in the United States, demands that we do atonement for our racism and complicity in white supremacy here and now. This atonement must be done because lives are at stake. It is not enough for us to wait until a theoretic afterlife to have the dross burned out of us, when our participation in sinful structures of racism means that Black people continue to be murdered by agents of the state. It is not enough for us to send up thoughts and prayers for justice, when lives are being destroyed. We must act. We must repent.

If this repentance means that we must put aside our white cultural idols and center voices of color, this is a small price to pay for how much we have taken. We are so used to being the heroes and arbiters, that the prospect of stepping back feels like a cancellation. But in reality it is a balancing.

O’Connor was a great Catholic writer, but she wasn’t the only one. She wasn’t perfect. And in some areas her views could be seen as actively harmful. When we brush off her statements of smug prejudice as irrelevant, we forget what those statements look like to Black catholic readers. Once again we center ourselves.

Black readers need to be given consideration. And for Black readers, “white women grappling with their racism” is not, perhaps, as important a religious story as it is for white readers. That plot trope still keeps the white perspective normative, neglecting the reality that there is a range of possibilities for Christian story-telling in which the Gospel means liberation in a physical, literal way. In which Jesus comes not as judge or Other, but as present with the sufferer in times of affliction.

O’Connor depicted, perhaps in a flawed and incomplete manner, a panorama in which the paradoxes of Jesus’s gospel teaching are real forces in human life. How can we remain true to what is best in her work if we make an idol of her?

O’Connor’s texts are still taught in schools and colleges. Her books are available for sale online and in physical bookstores. You can take them out of the library. Removing her name from a dormitory is not a cancellation. It only feels that way because, as white people, as white academics, we are used to holding center stage. It feels like that because, as is often remarked, justice often feels like oppression, to the privileged.

Removing the name of a revered white writer and replacing it with the name of a descendant of slaves almost reads like an O’Connor motif, anyway.

September 7, 2020
Facing this Election, We Must Recall the Church's Teachings on the Dignity and Rights of the Worker
Next Post