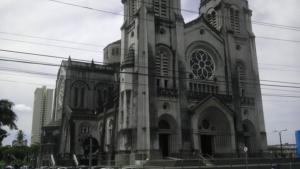 Cameron Bertuzzi is an influential speaker and media producer in the popular field of Christian discourse known as “Apologetics.” Unlike most kinds of religious media, Apologetics is frequently aimed at a non-Christian audience, or at Christians interested in responding to criticism of their beliefs.

Cameron has made his mark on the scene of Christian Apologetics by way of his show “Capturing Christianity” in which he interviews influential speakers and writers in the field. While Cameron has not, himself, developed upon the field in a significant way, he has been extraordinarily successful at promoting Christian Apologetics and in bringing attention to thinkers who have done some groundbreaking work. As a result, Cameron has a sizable audience of followers all over the world.

While Cameron has not made any obvious efforts to narrow his Christian audience to a particular denomination or theology set, his approach to Christianity has been from a broadly Protestant perspective.

In November of 2022, Cameron made an announcement that he had switched to Catholicism. It would be an exaggeration to say that his audience was stunned, but the announcement brought with it a significant amount of attention. So much so, that Cameron had to make public requests that Catholics stop messaging his wife welcoming her to the faith.

Given the nature of this column, the question becomes, can conversion research provide us any insight into Cameron’s switch?

It is of interest that the Oxford Handbook of Religious Conversion includes faith switching – anything from switching churches, to denominations, to different religions entirely – under the praxis of “deconversion.” The idea, of course, being that in order to switch to a new religion, one must also leave one’s current religion. The number of people who switch to a new religious affiliation during life is fairly high at 30%.

Bertuzzi’s religious change does not bear the hallmarks of most religious conversion theories. For instance, in his many articles, posts, and interviews on the subject, Cameron does not suggest that he was experiencing some problem or life difficulty which led him to explore new religious avenues.

In fact, Bertuzzi’s religious change is more similar to models of religious skeptics who convert.

The first step in that process is the removal of intellectual objections. And Cameron had a few such objections against Catholicism.

According to an interview on the “Pints with Aquinas” podcast/YouTube channel, Cameron’s primary objection to Catholicism was the doctrine of “divine simplicity”. Without getting into the complexity of that doctrine, it was Bertuzzi’s impression that one needed to embrace that doctrine in order to be Catholic. However, listening to an argument which offered a different perspective on this doctrine changed his mind.

A similar process occurred with Bertuzzi’s ideas of hell, and a little digging convinced him that it was not inconsistent with Catholicism to be a “hopeful Universalist” (meaning that you can maintain optimism that all people will be saved in the end).

The final step toward Cameron’s conversion was an investigation into the Papacy. Bertuzzi lays out his process and arguments for this elsewhere, but ultimately his intellectual objections to the Papacy were removed, and he finally had intellectual permission to consider Catholicism a viable option.

Further still, if the Papacy was true, Protestantism was no longer an option. The dissonance, or doubt, was turned the other way. Catholicism no longer needed justification, it was Protestantism which required defense.

That Cameron put so much work into investigating the intellectual side of Catholicism prior to making the switch is unusual. According to Pew Reports (2009), people who switch religious affiliation are much less likely to report beliefs as the main motive. This can, perhaps, be attributed to the fact that Bertuzzi has invested himself so heavily into giving reasons for his belief system, that reason has become a primary motivator for him.

The second step for skeptics who convert is forming positive associations with members of the religion. Cameron admits in his interview that many of his intellectual heroes were Catholic, and, many of those had switched to Catholicism from Protestantism.

The final step for skeptics who convert is related to an emotional attraction, or a numinous religious experience. For Cameron, the groundwork for this had been laid long ago. As a photographer, Bertuzzi was attracted to beauty in art and architecture, and the Catholic churches were far superior in that respect.

Whereas skeptics who convert do not typically face the difficult social changes that come from exiting a religious tradition, Christians who deconvert do. Cameron and his wife are facing a unique situation in this respect. They are facing the loss of community and the identity crisis that comes with deconversion, but also the adoption and acceptance into a community, and social support that comes with religious conversion.

Bertuzzi’s process has not been an easy one. With such high visibility, and with so many followers, Bertuzzi has received an understandable amount of pushback for the change. However, oddly, much of the difficulty has come from Catholics who over-enthusiastically have been contacting himself and his wife to “welcome them home.”

However, Bertuzzi’s very public change of faith serves as a valuable case study in the process by which one switches to new beliefs.

Broadly speaking, the process of religious change that comes with switching faith systems has features related to both conversion and deconversion, and possibly merits its own category entirely.

November 28, 2022
"A Manual for Making Atheists": an Imperfect Book but an Effective Movement
Next Post