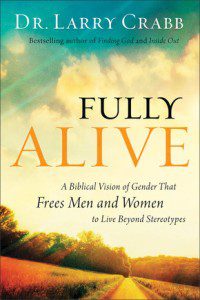 And thus begins Fully Alive: A Biblical Vision of Gender That Frees Men and Women to Live Beyond Stereotypes. Dr. Larry Crabb gives the biblical foundations of the role of men and women and a launching pad to help Christians to fulfill those roles.

One of the strangest things I encountered as I read this book was the similarities between Crabb’s views on the body and Pope John Paul II’s Theology of the Body. Both see the body as a clue to what the Maker had in mind when He made us male and female. Both see the body as part of the identity of the person, inseparable from the soul.

I recently read a book that explained the God-given vocation of women from a Catholic perspective. Crabb’s view of the role of women was identical. His title promises to “live beyond the stereotypes.” His views of women and of men seem to at the same time go against the stereotypes and uphold the 1950’s stereotypes.

Women are the nurturers, men are the doers. But they both do it all for the glory of God.

For some reason, the message went down easier coming from Crabb than it has from other authors. Maybe it’s because he’s a man. Not because I respect a man’s word more, but because I tend to think more like a man. So Crabb is speaking my language more than a female author does.

Maybe it’s because his teachings are Bible-based. He goes straight back to the Hebrew and Greek and gives historical context for the different verses. In my spirituality, I tend to be Bible-centered. So, again, he is speaking my language when he quotes Scripture extensively and looks at it critically.

Overall, I particularly appreciated his emphasis on community. This also reminded me of Catholic theology. He says that we are to mirror the love of the Trinity in our relationships. The vocation of every person is to love everyone as God loves us. Many books of this type only emphasize the role of community for the woman, not the man as if men don’t need others, but women do. Any observation of human nature will show you differently. We are all social creatures, we all need community.

I found this book enjoyable. I learned a lot. The writing was engaging. I’d recommend it to anyone looking for the Biblical basis for the roles of men and women.

Bethanie Ryan is a blogger and house-wife in upstate New York. She recently graduated with her MA in Pastoral Studies and has been trained as a hospital chaplain. She is a convert to the Catholic faith after a very long journey. 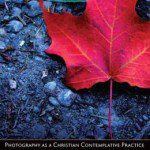 May 31, 2013
Seeing with the Eyes of the Heart: A Q&A with Christine Valters Paintner
Next Post 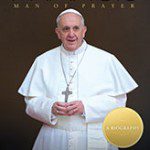 June 18, 2013 Did the Cardinals Know Who They Were Electing?
Recent Comments
597 Comments | Leave a Comment
Browse Our Archives
get the latest from
Take and Read
Sign up for our newsletter
POPULAR AT PATHEOS Entertainment
1