Conquering Our Giants: A Q&A with the Authors of Five Stones 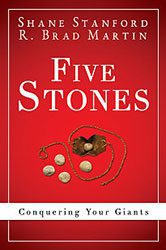 “My name is Shane Stanford, and I am a giant killer.” So begins the first chapter of a new book by United Methodist Minister Stanford, and his friend and former CEO of Saks Inc. R. Brad Martin. In Five Stones: Conquering Your Giants, Stanford and Martin engage the well-known biblical story of David and Goliath, along with their own real-life stories of battling giants, to draw out lessons for us on how we fight the giants in our own lives.

Stanford and Martin took some time to answer a few questions about their book for Patheos. (For more conversation on this book, visit the Patheos Book Club here.)

Q:  Shane, you say everyone is called to be a “giant killer.” What do you mean by that?

Q:  Shane, how did you and Brad meet?

SS:  The short answer is at Christ Church Methodist in Memphis. I had heard of Brad Martin long before I met him. He had bought the company where my aunt had worked for most of her adult life. She had mentioned meeting the new CEO of the company (Brad Martin) and how she was impressed with him. I kept up with Brad’s journey over the years, never imagining that one day I would become his pastor.

After being appointed at Christ Church, I asked some of the congregation’s most experienced leaders who THEY would consult for guidance and wisdom about leading such a large and complex organization of nearly 6,000 members. Brad Martin was at the top of that list. I could not help but remember my aunt’s assessment of Brad after I met him in person for the first time. Though someone may be aware of his success and reputation in the business world, it is his humility and grace you first notice when meeting him in person. It didn’t take long for me to treasure his counsel and wisdom.

Q:  So what led to the writing of Five Stones?

SS:  We began a conversation about ‘the giants’ of our lives. I shared my story as an HIV+ hemophiliac, including my struggles to be ordained and to find a church in which to serve (or which would accept me?). Of course, I knew of Brad’s journey as a businessperson and of his charitable nature. But, I had no idea that he had faced his own share of giants as well. Our discussion around this Biblical passage became a ‘meeting place’ for us and we realized that no matter what form they take, giants look and act much the same.

Five Stones is the unfolding of those conversations. What began as private discussions about David and Goliath, quickly transitioned into a framework for how any person in any circumstance can face life’s giants. We concluded that most people confront the giants of their lives either believing they CANNOT win the battle, or, they take on the battle with the wrong tools. The result is that we either retreat and hide, or we go to battle unprepared.

Q:  What do you believe this book will do for readers?

SS:  This book will show you that not only are the giants of your life defeatable, but each of us has been given the right tools to win the battle. We base Five Stones on the story of David and Goliath. It is obvious that the match between the shepherd boy and the giant was anything BUT a coincidence. God likes these odds because they force us to trust only in God.

We want to train you as a ‘giant killer’. Before you recoil, you need to know that, yes, you were born to be a giant killer. And, if you were born to take down the giants of your life, then God must have given you the right tools and resources to make it happen. Our goal is not to make you into something you are not, but help you become that which you were always meant to be. These lessons are set within the power and context of stories—our stories, your story, their story, and His story. One theologian said, “No work of God happens outside the narrative of one footstep, smile or tear”. We agree.

Q:  Shane, what was one of your biggest challenges?

SS:  Easily, being diagnosed HIV+ as a Junior in High School was one of my greatest challenges. It was the summer of 1986 and I went to bed with the ‘world on a string.’ I was captain of the golf team, president of my student class, and dating the prettiest girl in school. The next day my doctor told me that I was also HIV+, contracted from medicines (made of human blood donations) used to treat my hemophilia. At the time, there were no medicines or ‘cocktail’ regimens, only the sobering reality of a life that would most likely end in suffering. As you can imagine, my world collapsed. The giant of despair grabbed me and beat me without much resistance.

Q:  Brad, why do you think it is important to see what is coming when facing challenges in business and life?

RBM:  When assessing an opportunity, dealing with a challenge, or even facing a giant, a clear picture of the outcome one wants to achieve is critical. Whether it’s a task you’ve been assigned, a challenge you wish to undertake or must contend with, or a giant that appears unexpectedly in your life, you must have a clear picture of how you want encounters such as these to turn out. A clear picture doesn’t have to be a complicated picture. It can be unconventional and certainly it can be improbable, but complicating the picture can actually limit chances for success. Certainly, “clear” doesn’t mean easy. It may very well take a significant amount of time to get clarity on the opportunity or the challenge, but once you’ve done so, the picture must be straightforward and easy to understand.

Q:  Tell about time when you put this into practice?

RBM:  Years ago, as a twenty-one-year-old student at Memphis State University, I was invited to deliver the commencement address at the University’s graduation ceremony. I had recently been elected as a member of the Tennessee House of Representatives, and I think the novelty of my election while still a student at the University made me a different, if somewhat risky, choice to deliver such a speech. Even though I hadn’t yet graduated, I had attended a few commencements. I couldn’t recall the content of any commencement speech I had heard, but I did remember each of them as being long-winded. So I pictured a commencement speech that would take less than three minutes to deliver. And trust me, the preparation required to focus the “picture” I wanted to share with the graduates to just three minutes required significant effort. It would have been much easier for me to write a longer speech.

A few days before the graduation ceremony, I was asked to submit a copy of my speech to the University leadership for review. After seeing my speech, the Vice President of Communications from the University called me and said, “This is a terrific start. Please send the rest of your speech.” “That is the complete speech,” I replied, “and it will last less than three minutes.” I’m convinced if the University had had time to get a suitable replacement, they would have found a new commencement speaker. But on graduation day, I drew the picture I wanted to share and delivered the remarks in three minutes, exactly as I had drawn them up. The applause lasted longer than the speech.

Q:  Why is obedience to God important in facing difficult times?

RBM:  We must follow where God leads, even when the situation is uncomfortable and difficult. Obedience leads us beyond what we can see or understand. Obedience happens when we commit ourselves to a closer walk with God. Obedience is not meant to be hard or difficult. In fact, it should be an outflow of what God has planted inside of us. The challenge in obedience lies in being able to wade past the world’s other requirements and in redefining the nature of how we are called to make a difference. We often set up our lives trying to satisfy others, when it is God’s satisfaction that really matters.

Q:  Why do you say “feeling” is important in overcoming giants?

RBM:  I remember one of my first golf lessons with an outstanding local golf instructor. I hoped he could at least help me grasp the fundamentals of the game. In fact, that is where we started. However, early on things were not going well, and I grew frustrated with my lack of progress. Finally, after several failed attempts to strike the ball properly, I shouted, “Think, Brad, think!” To which the instructor replied, “No. . . . Feel, Brad, feel.” With a consistent, focused training routine, you will begin to “feel” what you need to do. Don’t underestimate the power of a consistent, focused training routine as the surest way to hone skills and develop expertise. This is true whether you are a world-class athlete or a faithful soldier facing the giants of this world. 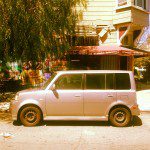 August 13, 2013
Finding Freedom On Our Family Vacation
Next Post 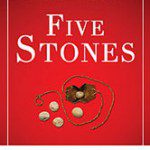 The Omen gets a prequel and Left Behind...
Both of these long-running end-times franchises are starting anew, with new actors...
view all Entertainment blogs
What Are Your Thoughts?leave a comment