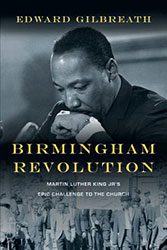 Edward Gilbreath’s phenomenal new book Birmingham Revolution: Martin Luther King Jr.’s Epic Challenge to the Church is proof that we will likely never cease to uncover new levels of appreciation for or new revelations in regards to the incredible life and ministry of Dr. King. Taking a focused look at King’s campaign for civil rights in Birmingham, Gilbreath uses this moment to both discuss the role King’s faith played in his campaign for racial equality and to challenge today’s church to consider how we might continue to learn from and, more importantly, act on, King’s legacy.

Gilbreath makes a strong case that a deeper, more thoroughly nuanced and researched, historically contextualized, and complex understanding of King is desperately needed today. He cites historian Tim Tyson’s concern that King has been transformed into “a kind of innocuous black Santa Claus, genial and vacant, a benign vessel that can be filled with whatever generic good wishes the occasion dictates” and expresses frustration that

“In various ways, King has been sanitized, domesticated or simply forgotten. The real Baptist churchman and fighter for social justice has been reduced to the fatherly saint who ‘had a dream.’ Conservatives who once reviled him now claim him as one of their own (at least when it comes to select issues). Liberals who once failed to fully grasp his significance now treat him as their modern standard-bearer while ignoring his roots in the church. But all of these versions of King pale in comparison to the radical visionary who composed ‘Letter from Birmingham Jail.’ Revisionist history abounds, but somehow the real man has been misplaced” (94, 139).

The particular corrective Gilbreath offers in Birmingham Revolution is a close analysis of King’s Birmingham campaign, in particular his Letter from Birmingham Jail, addressed from solitary confinement to eight white moderate ministers who had publically condemned his demonstrations as “unwise and untimely” (81). While they claimed to support the cause of civil rights, they were uncomfortable with King’s tactics and maintained segregated congregations, arguing that the fight for equality should take place through legal channels and not grassroots efforts on the streets.

King’s response—while addressed directly to the Birmingham Eight—was more generally an address to the greater society of onlookers, especially the church, to which it is a “blistering indictment…[of] its refusal to get behind the freedom movement, its proclivity to act ‘more cautious than courageous’ and its tendency to remain ‘silent behind the anesthetizing security of stained-glass windows” (107). King’s concern that the church of 1960s America had lost its willingness to risk comfort and security for the cause of justice might apply equally to the church today in 2014. Gilbreath challenges his readers to take seriously King’s reminder of the early church’s commitment to justice, racial and otherwise. He suggests that the church today should be engaged with not just talk on but action regarding “income disparity, public education and immigration reform,” issues to which we might add even more arenas of civil rights like abortion legislation (165). Gilbreath’s—and King’s—central question is “What does it mean to live out the Christian gospel in the context of a broken, unjust society?” (16). Both men agree that the answer involves thinking critically about and advocating for justice wherever and whenever we are able. King warned that if the church does not take up this role, we risk being “dismissed as an irrelevant social club,” words surprisingly uncomfortable to read in light of the status of the Christian church today in American culture (16).

The chapter that resonated most powerfully to me though was entitled “Dreams and Nightmares.” In it, Gilbreath shares conversations with teachers, professors, and scholars of religion regarding how King’s legacy is being treated in our educational system and churches today. One eighth grade teacher shares her shock at how—even though education on Black History month was included in the curriculum and book reports on King biographies were assigned—her students were aware of only the most general details of King’s life. Along the same lines, Edward Blum, professor of race and religion at San Diego State University, wonders why—despite being raised in the Presbyterian church—it was only at a secular university that he was introduced to King’s letter. Blum potently asks:

“Why was his letter kept from me? Why did we never encounter it from youth pastors who took us to Jackson, Mississippi, on mission trips or from high school history teachers who were obsessed with the injustice of the Holocaust but not Jim Crow? Why did I have to wait to be in a ‘secular’ space at a state university to finally read a spiritual document addressed to people white, male, and religious like me?” (159).

This emphasis on education hit home for me especially because this past August, I began work at Elizabeth City State University, a historically black college in North Carolina. Several weeks ago, in a discussion on the value of developing one’s writing skills, I used King’s Letter from Birmingham Jail as an example of how writing well can have powerful social, cultural, and civic implications. Not a single one of my students—in a class with over thirty in attendance, nearly all black—had ever encountered the letter. Absolutely shocking.

The revival of more authentic education on King’s ministry is clearly essential to our society. For the church, it is not a choice, and as a Christian I will work more assertively to incorporate King’s ideals and Gilbreath’s indictment for the contemporary church into my faith. Additionally, as an educator in a secular university with a predominantly black population, I will be teaching King’s work with more care and detail as well. His legacy is not one that should dwindle to platitudes and nostalgia. His work is not done yet and must continue to impact our perspective on the world and our actions in it. This won’t be possible if the right education on his legacy is not taking place. Gilbreath’s work goes a long way in pointing us toward this revival of King’s revolution.

[For those interested in taking on this challenge with me, Gilbreath’s book culminates in the inclusion of a list of extensive resources: the list of recommended reading at the end of Birmingham Revolution is extensive, and his website includes a free downloadable discussion guide companion to the book.]

Visit the Patheos Book Club for more conversation – and to read an excerpt – from Birmingham Revolution. 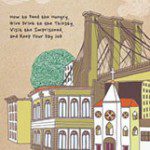 February 17, 2014 What Happens in Lent Doesn't Stay in Lent
Recent Comments
2,338 Comments | Leave a Comment
Browse Our Archives
get the latest updates from
Take and Read
and the Patheos
Entertainment
Channel
POPULAR AT PATHEOS Entertainment
1

A podcast about a podcast you should be...
Review of "The Rise and Fall of Mars Hill" podcast by Mike...
view all Entertainment blogs
What Are Your Thoughts?leave a comment