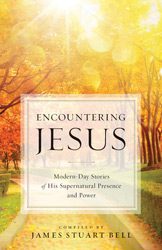 It’s hard to stay cool while speaking to a hot question. And when the question has religious overtones or is religious to the core, the hot gets hotter. Gay marriage, new Calvinism, race – pick one. How’s this? Did all supernatural manifestations within Christianity (especially appearances and some form of the presence of Jesus) end when the apostles died out and the writing and compilation of Scripture was complete? Strong and respected voices make their “yeses” and “nos” quite clear. Using I Corinthians 13:8-13 as a starting point, B.B. Warfield (Counterfeit Miracles) and most recently and notably, John MacArthur (Strange Fire) say these things have either ceased or are grossly overestimated. John Wimber (Power Healing and Power Evangelism), Jack Deere (Surprised By the Power of the Spirit) and John White (When the Spirit Comes With Power) counter from the other side.

In the new book Encountering Jesus (Bethany House), James Stuart Bell not only doesn’t have a dog in the fight, he doesn’t want to fight at all. He just allows 39 ordinary people, men and women sprinkled across every corner of the country and the Body of Christ, to tell their stories. The bottom line for him — these things happen. Truth disclosure: I agree with him. He nails some things that authenticate he’s no sensationalist.

First, a number of the people in the book tell their story for the first time. People who experience these things often hush them up thinking they will be regarded, even by their Christian friends, as being weird. Sort of like people who have ridden on UFOs to other galaxies where Elvis still sings in a night club owned by Jimmy Hoffa. As one who’s been around long enough to have won some trust, I’ve been honored to hear these stories told, many for the first time.

Second, none of these people were seeking any kind of supernatural cheap thrill. Most were in deep pain and brokenness of some kind. Some weren’t even looking for God at all. The vast majority of all supernatural encounters with God/Jesus of all kinds in the Bible were ambushes initiated by God. The only exception might be Moses in Exodus 33:18-23. And He got way more than he bargained for.

Third, a few of the people Bell approached to tell their story declined because it was too intimate, too personal to be shared. I’ve known others who feel the same way. In the Old Testament, “knowing’ means more than packing away information until the day when Alex Trebek calls wanting us for Jeopardy. It describes lovemaking between a husband and wife. This doesn’t refer to anything sexual with God. Pornography describes the result of something hidden and intimate shielded by commitment and love thrown out into the street to be gawked at by anyone. Spiritual story-telling can be pornographic as well. That Bell respects this rings with authenticity that these things happen and he possesses a holy regard for stories left untold. I Corinthians 15:5,7 alludes to Jesus appearing to both Peter and James. What happened was nobody else’s business as the juicy details remain hidden.

Fourth, none of these people made their experience the foundation of their walk with God. All of them relied on faith interwoven with prayer and Scripture as well as relationships with other in a local church. These aren’t super Christians but ordinary people vulnerably telling how God broke through at a crucial time. Experiences like these don’t solve all our spiritual issues forever and sometimes have no effect at all. Think of the nine lepers who never came back to Jesus to so much as give a ‘thank you’. But that is not to say that these things faded away. Spiritual encounters have a life all their own and we can reach back over years, not to recreate them, but to touch the invigorating life we gained from the Christ who met us there.

Fifth, these stories drip with the love of God through Jesus Christ. This book won’t convince skeptics that miracles happen or that God exists. People believing these things have ceased may not change their mind but they will be moved to think about it if they give these stories a read. The ancient Celtic monks knew something called “thin spaces”. This describes situations and actual place where the veil separating time and space from eternity is less than tissue thin. Scripture abounds with these. While we can’t cross or step through, Jesus Christ can. The experiences in the book cover a broad range – dreams, visions, healings, voices, sightings of either Jesus or other unusual signs of His presence, extremely coincidental answers to prayer. The only thing not there was life after death experiences. A few instances seem almost trivial, almost sugary. The reader finds himself thinking, “With all the need, tragedy and sin in the world, the Lord spent His top shelf stuff on that?” Love knows nothing trivial in the life of the one loved.

When I teach on the theology of spiritual experience, I assert that, while we cannot demand or claim any entitlement to this kind of thing, many of us may encounter Jesus Christ in powerful ways sometime during our earthly pilgrimage. He loves us so much that He cannot restrain Himself. That He reaches through with such variety, touch and even tenderness shows the intimate knowledge He brings to every soul. That He chases down, not only those who have drifted away, but also the blind and disinterested as well as the angry and hateful (think Saul of Tarsus-Paul the Apostle) shows a Love that still pursues in fire regardless of how many hits and rejections it suffers.

A friend serving in the Army doing weather work was out on a firing range in New Mexico releasing weather balloons. The sergeant in charge said that some missiles being tested would be fired their way in a few minutes. But they were not to worry as long as they stood inside these circles on the ground. “What’s so special about these circles?”

“These circles are the targets; they never hit them. Safest places in the world.” James Stuart Bell’s friends tell the stories of how their lives became the targets of the love of Jesus Christ. They say with many voices, yet joined in chorus, two things. One, Jesus never misses the target. And two, His love has moments when He hears our cry, sees our pain and aches over how numb our soul has become that He seems very different from “safe” as we shallowly know it.

Read an excerpt from Encountering Jesus — and more conversation — at the Patheos Book Club here.

September 1, 2015 What's The Cause Church? A Q&A with jKonrad Hölé
Browse Our Archives
Related posts from Take and Read