The Power of the Cross: A Review 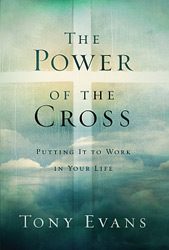 One might wonder why an established old school publisher like Moody Press would put out a book into a “felt need” market entitled The Power of the Cross: Putting It to Work in Your Life. The main reason (with which I find myself in agreement) lies in the fact that many who profess to believe in what the cross stands for simply have become numb to it, taking it very much for granted. The cross of Jesus Christ has become a superstitious symbol for generic, mystical good – twisted into bizarre shapes, overwrought with grotesque ornamentations and worn as talismans to ward off evil. All of this with little, if any, connection or regard for Jesus Christ whose death on one changed the cross’s image from being an instrument of torture to an object of devotion. Christian merchandising hasn’t treated the cross all that well either, rendering it cute or making it pretty for marketing purposes.

Christian preaching and teaching hasn’t helped either. Sometimes we in leadership assume that people already know this and, in a way, they do – at least the church crowd. But much current preaching that aims to make the Christian faith attractive, cool, relevant, enjoyable and served up to the taste and conveniences of the hearers actively avoids mention of the cross. So whether the reader needs to shake a little rust off their faith or to inquire more deeply as to the significance of the cross of Jesus Christ, this will be a bone with good meat on it.

Anyone in either case finds themselves in the company of a good, trustworthy guide in Tony Evans. Let old dogs do what old dogs do. (I speak as an older dog.) Aretha Franklin and Joni Mitchell should be left alone. When anyone tries to cover their stuff, a S.W.A.T. team should blow the roof, rappel down with guns drawn and order, “Drop the mike and step away.” Tony Evans has been a good and sure voice (I cannot vouch for his singing) for the cross of Jesus Christ for a long time. He knows two things resurfacing repeatedly throughout his book. The cross (meaning the death of Jesus Christ engineered on it) stands as the core of the Christian faith. The first third of the book highlights biblical evidence on Jesus’ deity, the role and accuracy of prophecy and the importance of the crucifixion and resurrection. These will be good refresher thumbnails for veteran in the faith as well as a nice introductory taste of these things for the curious. Jesus Christ did not primarily come to give us an example of how to live. He came to die as the Saviour of the world. Without His death and resurrection, the living He demonstrated is impossible.

Tony’s second major point underscores that Christ’s death means something for us now. What did the cross do that we benefit from whether we know it or not? Tony’s thought is that many Christians live in a self-imposed spiritual poverty; spiritually, we’re leaving money on the table. And the middle third lays these out in concrete detail. Having done the pastoral thing for almost four decades, I found these to be extremely descriptive of the barrenness of much Christian living that I’ve seen.

But the third section is the butter on the roll. Right now I’m living in circumstances where there’s a lot of chop on the water of my life. It’s good chop on the water but chop nonetheless. Sometimes, in times like these or when the chop is not so good, I marvel at how I should be freaking out more, coming apart more, feeling stressed out more, panicking more, groping for control more. But strangely, I’m not and there’s no earthly, human reason for it because I’m so good at all these. It’s Jesus – crucified and risen. Christianity is the only one among faiths, religions, ethics, philosophies, etc. that faces the truth about reality in space and time in that Christianity not only faces the existence of real evil in the world, it snaps the crippling power of it like a twig. Tony saves his best fastball for these chapters describing the sheer power of the cross.

The epilogue underscores the cross of Jesus Christ as the only solid basis for unity. We are so currently divided over so many things. Nelson Mandela came to Bishop Desmond Tutu as apartheid was dying in South Africa and a new government prepared to take power. He basically said to Tutu that unless the people entered into forgiveness, the hatred left over from all the violence and oppression would destroy the new nation in the cradle. The Christians must take the lead in teaching the new South Africa because they are the ones who understand forgiveness the most. He was and is right. The cross of Jesus Christ is the only common ground where we are amazingly forgiven by God so we can become the forgivers among people.

Read an excerpt from The Power of the Cross — and more — at the Patheos Book Club here.

April 1, 2016
Getting Real About Jesus and Our Messy Lives: A Q&A Daniel Fusco
Next Post