Angels Among Us: A Patheos Q&A with Joan Wester Anderson

Angels Among Us: A Patheos Q&A with Joan Wester Anderson November 29, 2016 K. Mulhern

Twenty-some years ago, Joan Wester Anderson was writing about any number of things for parents, career moms, and more, until one of her son’s had an extraordinary experience. That experience, and her exploration of it and all that ensued, changed the course of her writing and triggered a great stream of interest in all things angelic. Her bestseller, Where Angels Walk, is now twenty-five years old and still a powerful read. This new edition invites a new generation to encounter the presence of angels in our midst.

Patheos had the opportunity to ask Ms. Anderson some questions we thought our readers might ask. You’ll be ready to pick up the book!

Your book is a wonderful compilation about individuals and their experiences with angels. Where did you get these stories?

Thank you! Due to a rescue that my son experienced, I began to wonder if he had actually met an angel. I was a professional speaker then, so after my talks I started to tell audiences about my son’s experience and asked if anyone could report similar happenings. I hoped for a handful of responses, but I was inundated with mail. (No Internet yet.)

What is an angel? Are there different beings that all fall under that category?

People often assume that when human beings die, they become angels, but such is not the case. Angels and people are two different species, each with its own purpose.

When have you experienced an angelic presence? How did it change you?

Once while I was the hospital waiting for a test, my nurse told me that the test would be negative, and I was fine. I didn’t pay too much attention, until I later attempted to find the nurse and was told that there was no such person. (The test was negative.) Events like this are beautiful faith-builders, but they rarely happen to me; I think my job in the Kingdom is primarily to introduce people to the angels in their lives.

This book is a 25th anniversary edition. What impact do you think your book has had in the world?

When I began collecting data, only one pollster was measuring belief in angels, and it was about 50- 60 percent. Today the percentage runs about 75-80 percent. I would love to believe that my book had something to do with that! I have also noticed a wider acceptance of my message among the clergy; many of them use my stories in their homilies. Also, my book turned into a series, with editions produced in sixteen languages.

How has your understanding of angels and the angelic realm changed in those twenty-five years?

I was very nervous when I first started the project. After all, who am I to be speaking for the heavenly host? But God’s timing is always so perfect, and I had recently joined a charismatic prayer group that leaned heavily on the gifts of the Holy Spirit. As time went by, I learned to recognize certain “signs” or “knowings” and was more comfortable. Of course the angels never change; it’s always up to us to decide how much we want to become involved.

Do you think we each have a guardian angel?

God is just, and doesn’t play favorites, so either all of us have guardian angels, or none of us does. I think we all have them and we just aren’t used to acknowledging them.

Can we open ourselves up to experiencing the angels or is this something that can only be a divine gift?

By all means, angels are available to everyone. They are mentioned in Scripture over three hundred times, which certainly indicates their importance, and God himself told us that he was sending them to us. All one really has to do is to treat them as friends, ask them to come into your life, pray, and give thanks for them. And do ask them for help and strength during difficult times.

How can the knowledge of angelic presences and ministry in our lives help us in our knowledge of God, of the afterlife, of sorrows, and more?

Many people believe that we will come face to face with our guardian angels when we die. This blessed being, who has been our companion throughout our lives, will take us to the Father. What a wonderful possibility! We should see to it that every day includes a thank you to this heavenly guide.

November 23, 2016
Living With and Loving the Saints: A Patheos Q&A with Fr. James Martin
Next Post 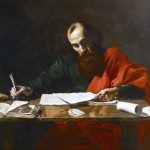 January 2, 2017 Who Are We to Judge? A Review of 'Paul Behaving Badly'
Browse Our Archives
get the latest from
Take and Read
Sign up for our newsletter
POPULAR AT PATHEOS Entertainment
1

Notes on film criticism for Catholic reviewers
Recently I had an email exchange with the award-winning filmmaker Frank Frost,...
view all Entertainment blogs
Copyright 2008-2020, Patheos. All rights reserved.