Living With and Loving the Saints: A Patheos Q&A with Fr. James Martin

Living With and Loving the Saints: A Patheos Q&A with Fr. James Martin November 23, 2016 K. Mulhern

Ten years ago, Fr. James Martin wrote a best-seller: My Life With the Saints. In it, he introduced sixteen Catholic saints and wove their stories into his. Now he has updated this memoir with his reflections on the saints, his own yearning for saintliness, and new stories. Patheos invited Fr. Martin to answer some of the questions our readers might have as they encounter Fr. Martin’s wisdom and explore the lives of these men and women who have so powerfully changed human history. 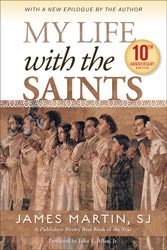 First of all, this book is an update from your best-selling memoir. Tell us, what has really changed and what hasn’t?

What’s changed is that my understanding of sanctity has deepened. Specifically, I understand better than I did ten years ago how hard it is. Perhaps when you’re younger you think that all you need to do is know and follow the Gospels, and then you start your path to sanctity. That is, the knowledge of what to do seems sufficient. Then you just do it. But as will not be a surprise to many people, but it took me a while to figure it out, it’s hard work. Forgiveness is hard. Loving is hard. Mercy is hard. So my appreciation for that has deepened, I think.

What’s not changed is my love for the saints. I still feel such fondness for them, see them as my examples and pray for their intercession. If anything, my love for them has grown since the first edition was published ten years ago.

Which of the saints you write about was most central to your experience before? And has that changed?

Before, it was John XXIII, who is now Saint John XXIII. (One of the fun things about the new edition was seeing how many of the holy men and women who were on the way to canonization have “moved up.” So we now have Saints John XXIII and Teresa of Calcutta, as well as Servants of God Dorothy Day and Pedro Arrupe.) I looked to John—and still do—as an avatar of how to live a joyful life in the church. Now, however—and this will sound funny—I think more about St. Ignatius Loyola. Of course, as a Jesuit my life was always colored by his spirituality, but in the last ten years I have come to love and know him more. So he’s more the center now. I hope John XXIII isn’t too upset!

Which saint do you most resonate with?

Again, John XXIII. I find his open-hearted joy and his lighthearted humor completely to my liking. And he was also not above some sly humor. He was once asked, “How many people work in the Vatican?” And he said, “About half of them.” I love that.

Oh, definitely St. Thérèse of Lisieux. I love that she decided that in the Body of Christ she would be the heart. That’s so beautiful. I need to love more, as she did, all the time, even with people who annoyed her. I think of her every day.

Well, in fact, I ended up mentioning that in the new epilogue to the book. When I first wrote it, I didn’t want to have too many Jesuits. There are three: St. Ignatius, St. Aloysius Gonzaga, and Servant of God Pedro Arrupe. So I intentionally left out some of my favorite saints, a group of them really: St. Isaac Jogues and Companions, also known as the “North American Martyrs.” I’m always moved by the stories of missionaries. It’s a clarifying thing to ask yourself, “Would you leave everything you know—your country, your family and friends, your language, your culture, your comfort—to bring the Gospel to a people you had never met before, at the risk of your life?”

If some day you were to become a saint, what would your chapter title be called?

Ha! That will never happen. So the chapter will be called “Not a Saint!”

What are some ways that ordinary Christians could emulate these great Christians?

By remembering that, as Thomas Merton said, “For me to be a saint means to be myself.” That is, you don’t have to become Mother Teresa. You’re already you. And within you in the seed for sanctity in your own life. You just have to let it flower in the soil that is your existence.

Your concluding chapter is called “Holy in a Different Way.” Can you give us a hint about what you mean by that?

It’s similar to the idea of being yourself. We’re called to saints in different ways—with our unique personalities and in our own situations. It was the same for the canonized saints. Mother Teresa, for example, was very different from John XXIII and St. Ignatius Loyola. Very different! That doesn’t mean she was any less holy. Or that they were! They were “holy in a different way,” which is a quote from John XXIII.

Being holy sometimes means choosing different paths, too. Just think of St. John Paul II and Pope Emeritus Benedict XVI. Now Benedict is not a saint, but I think we can agree he’s a very holy man. When they were confronted with the same question: “Should I resign the papacy if I am infirm?” they arrived at totally different answers. John Paul said, in essence, “A father cannot resign from being a father,” so he stayed on. Benedict said, in essence, “If I can’t do the job I should resign,” so he resigned. Two holy men who took opposite paths. It’s being holy in a different way. Being who you are.

So what practices best help you as you’re “still trying to be a saint”?

That’s an easy question, since I try to follow them every day. Being loving and patient. Always giving people the benefit of the doubt. Not being a jerk even if I’m in a bad mood. Being generous to the poor and advocating for the marginalized. Praying. Offering someone a kind word when they need it. And then, loving some more.

November 22, 2016
Paul and His Passionate Priorities: A Q&A with E. Randolph Richards and Brandon O'Brien
Next Post

November 29, 2016 Angels Among Us: A Patheos Q&A with Joan Wester Anderson
Browse Our Archives
get the latest from
Take and Read
Sign up for our newsletter
POPULAR AT PATHEOS Entertainment
1

Snow White and the Seven Dwarfs and the...
On the day Disney+ went live, my sister and her husband selected...
view all Entertainment blogs
Copyright 2008-2021, Patheos. All rights reserved.